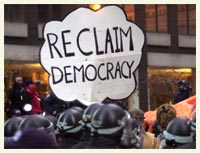 New York — Inside the posh Waldorf-Astoria, there was little hint of the boisterous protests that were taking place just beyond the hotel’s gilt entrance on Park Avenue. As an estimated 15,000 marchers surrounded the building during the early afternoon on Saturday, the government ministers and captains of industry gathered in the hotel were on the 18th floor, noshing on roast duck and discussing issues such as money laundering, drug trafficking and insurance premiums.

In the conference rooms surrounding the lobby, only the occasional peal of a siren interrupted the day’s pow-wows. With no television sets available in the public areas, the curious were forced to wander outside an make inquires of the riot-geared police, who were so numerous as to virtually block any glimpse of the drum-beating demonstrators.

Judging by the sentiments expressed by those gathered at the hotel for the annual World Economic Forum meetings, the gulf between those inside the Waldorf and those behind the police barricades on the street is unlikely to be closed anytime soon.

Many of the economic elite gathered for the annual summit, normally held in the Swiss resort town of Davos, were clearly preoccupied by the discontent evident on the street outside. But most seemed less concerned about what the protesters were saying than who they represented. Some openly wondered whether the thousands gathered outside were merely a gaggle of spoiled college kids, unfamiliar with the real nuances of international trade.

“Are the voices of the weak really sufficiently represented in these movements?” asked Michael Wolf, a senior partner at McKinsey & Company, during a lunchtime dialogue on anti-globalization. “Are these just kids standing around in Nike trainers, protesting? Or are there people from Africa?”

Mike Moore, the head of the World Trade Organization, was particularly blunt in his assessment of the protestors, whom he characterizes as largely misguided.

“Why are so many people opposed to what has been the most successful 50 years in the history of our species?” he said. “That confuses me, and it confuses a lot of people. Perhaps ‘globalism’ is the last ‘ism’ to protest.”

Though Moore offered some praise for the labor rights groups that have shamed companies for sweatshop practices, he had stern words for the sorts of aggressive protestors who interrupted Genoa and Seattle: “Their lineage does not go back to Gandhi and Martin Luther King, but to the far left and far right who opposed democracy in Europe in the 1930s.”

But as some attendees hobnobbed in luxury, snacking on soft-baked cookies and conversing under gold-flecked ceilings, an undercurrent of guilt was sometimes evident — a feeling that conversations about the protesters’ motives or messages were doomed to irrelevance without the participation of the protestors outside.

“Not to be too cynical about this, but aren’t we just kidding ourselves?” asked one high-ranking English delegate, who requested anonymity. “Unless we get the people outside in here, well, what’s the point?” The most public show of this defiance came from U2 frontman Bono, who turned down the WEF’s prestigious Crystal Award because, according to a trade unionist who dined with the rock star, “there is a substantial gap between rhetoric and reality at the Forum.”

A few of the more left-leaning WEF participants say they are disappointed that those opposed to corporate-led globalization have not invited a discussion to close that gap. Guy Verhostftadt, the prime minister of Belgium, said he was saddened not to be invited to the World Social Forum in Porto Alegre, Brazil — billed as an alternative to the WEF summit — despite having written an open letter in which he invited anti-globalizers to attend a trade conference in Ghent to discuss their qualms.

Still, many of the summit’s leading lights simply dismiss the protesters and the groups they represent.

“For heaven’s sake, they don’t even have an alternative,” said the WTO’s Moore, noting how confounded he is when he sees longshoremen and farmers marching against globalization. “You have to have an alternative before you can have a conversation.”

Peter Brey, head of the Swiss-based Terre des Hommes Foundation, believes he understands the disconnect. Terre des Hommes, which works on behalf of the world’s 2 million kidnapped children, is one of the few non-governmental organizations to have sent representatives to both New York and Porto Alegre.

“Genuine dialogue is needed, but fear on both sides makes it difficult,” says Brey. “The fear of Porto Alegre is that they won’t be listened to; the fear [of the WEF] is that it will become a symbol of what Porto Alegre fights against, no matter what [the WEF] does.”