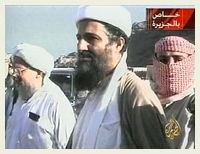 As the US-led military action in Afghanistan winds down, a new front in the war against terrorism is opening up back home, this one pitting American lawyers against Osama bin Laden.

Two civil suits have already been filed in federal court in New York by families of Sept. 11 victims, seeking unspecified damages from Bin Laden for causing the deaths of their loved ones. Legal experts believe more such suits may be coming, and stand a good chance. But for the plaintiffs, winning is only the first step. Getting paid could be far more complicated.

No one expects a personal check from Bin Laden if they win. Instead, lawyers are looking for payment from countries and organizations which backed him. Demanding damages from organizations is relatively straightforward. Countries, however, represent a much thornier problem. As yet, no recognized government has been definitively linked to the Sept. 11 attacks. And even if a particular nation were implicated, it might be US taxpayers that end up footing the bill for any courtroom victories.

Foreign states were long immune from being sued in the US, but Congress changed that in 1996 after three American citizens were killed when the Cuban military shot down two small planes belonging to a Cuban-American organization. The Anti-Terrorism Act passed that year allows Americans injured in terrorist acts at home or abroad to seek damages from a country proven to have been connected with the act, as long it is on the State Department’s list of states that sponsor terrorism.

That list currently consists of Cuba, Iran, Iraq, Libya, North Korea, Sudan, and Syria. None of these countries have so far been concretely implicated in supporting the September terror attacks. Still, lawyers representing the terror victims’ families are hoping that further investigation will lead to Washington pointing a finger at one or more of these countries.

Since 1996, Iran, Iraq and Cuba have all been successfully sued, with judgments in the hundreds of millions of dollars being handed down. The families of the slain Cuban-American pilots, for instance, were awarded $187.6 million. Terry Anderson, the Associated Press reporter held hostage in Lebanon for six years, won $340 million in his case against his kidnappers backers, Iran.

With that precedent established, James Kreindler, a New York lawyer who represents over 100 families of Sept. 11 victims, is contemplating filing terrorism-related lawsuits on behalf of their clients. “The objective will be to get real money from the people who were part of the conspiracy in the broad sense. Not just those involved in Sept. 11, but groups, fronts and states that supported Bin Laden before that,” says Kreindler.

With a federal judge in New York having recently ruled that Bin Laden can be served with legal papers through Afghan and Pakistani newspapers, as well as through announcements on Al-Jazeera and other broadcast outlets, proceeding with the lawsuits is now a viable option, says Pamela Falk, a professor of international law at the City University of New York’s School of Law. “I think these are totally feasible suits,” says Falk.

Winning the suits is unlikely to be the hard part. All of the terrorism-related civil cases won so far have been won by default, since those countries never bothered to defend themselves in court. Where matters have become more complicated is in how the judgments are paid.

In past cases, lawyers have gone after Iranian, Iraqi and Cuban assets that are frozen in the US. The State Department, however, has opposed releasing those assets, arguing that they need them as negotiating leverage with the governments in question, and that using them to pay off lawsuits could violate international treaties and lead to reprisals against Americans or their property abroad.

That position has created a problem for federal officials. As judgments piled up against Cuba and Iran in recent years, Washington was put in the position of appearing to defend the interests of countries that are not exactly popular with the public or on Capitol Hill.

Bowing to Congressional pressure, the Clinton administration hammered out deals in 1998 and 2000, allowing nearly $500 million to be paid out in cases involving Cuba and Iran. The Cuban judgements were paid using funds from frozen Cuban assets, but there was a catch in the Iranian cases, which accounted for the lion’s share of the payments: To address the State Department’s concerns, the federal government itself picked up the $400 million tab. The hope is that Iran will repay the money sometime in the future, when relations with the US are renewed.

Some skeptics believe US taxpayers will ultimately foot the bill for the Cuban judgements as well. Allan Mendelsohn, a professor of law at Georgetown University, predicts Cuba will be reimbursed when relations with Havana are restored. “The Cubans will say you owe us, and you don’t think the United States will not find a way to pay them, especially when we will be trying to help rebuild Cuba?” he says. “I am convinced that this is going to cost taxpayers in the future.”

In the unique Sept. 11 situation, one of the cases filed so far names only the Taliban regime and Al-Qaeda-linked organizations, not countries, as defendants. The US did seize some $250 million worth of assets linked to the Taliban or Al Qaeda in the wake of Sept. 11, but recently returned most of the money to Afghanistan. Some $34 million remains frozen — but that’s a paltry sum compared to the possible damage claims.

There is already legislation working its way through Congress which would make it easier for victims of Sept. 11 to lay claims to frozen foreign assets. That provision, already passed by the House, would probably force the White House once again to use Treasury funds to pay off at least part of the judgements.

Critics of such deals say they defeat the stated purpose of the suits: punishing states that support terrorism.

“It’s a big shell game,” says Mendelsohn. “They think they’re punishing Iran and other countries, but that’s not at all what’s happening.”

Richard Mosk, a judge on the Iran-United States Claims Tribunal in The Hague, which deals with asset disputes between the two countries, adds another cautionary note. The lawsuits, he believes, could open up a Pandora’s Box which may come back to haunt the American government. “Will the United States be held liable for the past acts of those it funded in such places as Central America?” he asked in a recent National Law Journal article.

Indeed, in response to the American lawsuits, the Iranian parliament passed a law two years ago which allows any Iranian “victim of US interference” to sue for damages dating back to the country’s 1953 CIA-sponsored coup. A Teheran court has already been set up exclusively to handle such cases.

The issue of the terrorism lawsuits is, obviously, a highly emotional one. The pain of the families who have lost loved ones in terrorist attacks and their right to seek compensation for their loss cannot be denied. But Stephen Flatow, whose family ultimately received $24 million in their suit against Iran for its role in the killing of his daughter Alisa in the Gaza Strip in 1995, says the victory brought little comfort. “People are going to be looking for closure in any way possible, but let me tell you, there is no such thing,” he says. That’s a lesson that the government and taxpayers may soon be paying for other victims’ families to learn.