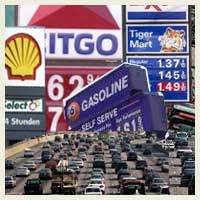 Perhaps it’s a sign of politics inching back toward business as usual: Congressional Republicans are exploiting the Sept. 11 terror attacks to push the Bush administration’s plan for an all-out increase in energy production. Lawmakers have proposed making the administration’s controversial plan — which includes drilling in the Arctic National Wildlife Refuge — part of a federal anti-terrorism bill being debated in the Senate this week. And even if that amendment fails, as Senate Democrats predict, drilling advocates are likely to continue invoking terrorism fears as they argue for more oil development.

Bush, of course, has long maintained that his energy plan will increase America’s “energy security” — meaning the nation’s access to relatively inexpensive electricity and fuel. To that end, he has proposed a package of measures intended to encourage greater production of oil, along with other fossil fuels and nuclear power. In a victory that surprised even Republicans, the House of Representatives in August endorsed much of Bush’s approach, including $33 billion worth of tax incentives for oil companies.

It’s questionable, however, whether these steps will in fact guarantee stable energy prices. Given the power that OPEC and the international oil companies have to manipulate production, the usual rules of supply and demand don’t apply to the oil business. And even if Bush’s approach works, it will affect the price of oil only in a narrow sense: what a barrel of light crude fetches on the London spot market, what a gallon of gasoline for the family automobile costs at the pump.

What matters more is what should be called the real price of oil. This is comprised of two elements: petroleum’s market price, plus the many indirect costs that its production and consumption impose on nature, public health, and future generations.

Under Bush’s plan, for example, the real price of oil will soon include not only those $33 billion in subsidies, but the potential destruction of Alaskan caribou calving grounds. Increased production also means a growing possibility of more oil spills like the 1989 Exxon Valdez disaster, as well as continuation of the less-publicized release of an average of 10 million gallons of petroleum into the oceans every year from tanker accidents.

Further raising oil’s real price will increased air pollution made possible by Bush’s relaxation of environmental regulations. Already, diseases stemming from car exhaust kill some 30,000 Americans each year, according to a 1995 Harvard University study. And back in 1993, the Worldwatch Institute estimated the damage to human and environmental health from vehicle emissions at $93 billion a year.

For the world at large, the most serious consequence of continued reliance on oil and other fossil fuels will be accelerating climate change in the 21st century. Though a number of factors contribute to the greenhouse effect, oil remains a major culprit. Some 40 percent of America’s greenhouse gas emissions stem from automobiles.

Scientists have noted that already — after a mere one-degree increase in temperatures over the past century — glaciers are melting and catastrophic storms becoming more severe and frequent. They expect the planet to warm an additional 4 to 11 degrees Fahrenheit in the 21st century, bringing yet more violent weather, flooded coastlines, killer droughts and social havoc. One insurance industry study projects that climate change will impose $304 billion of additional direct costs on the global economy every year.

Bush has rightly been criticized for rejecting the Kyoto accord on global warming. But the truth is, America has never been shy about expecting the rest of the world to support its oil habit. Presidents and Congresses of both US political parties have for decades affirmed military and diplomatic policies aimed at guaranteeing American access to overseas oil; the CIA-assisted overthrow in 1953 of Iran’s prime minister Mohammed Mossadegh — who had advocated nationalizing the country’s oil supplies — is but one example.

According to the Rocky Mountain Institute, an eco-think tank that analyzed Pentagon and Department of Energy spending data for the mid-1990s, federally funded research and development provided at least $300 million annually in subsidies for the fossil-fuel industry. And at least $50 billion of the US annual military budget during those years paid for forces whose primary purpose is to safeguard Middle Eastern oil fields and shipping lanes — and whose presence, especially in the Islamic holy land of Saudi Arabia, provokes bitter resentment in much of the Muslim world.

Economists use the term “externalities” to refer to costs that are not included in a commodity’s market price, but are borne by society as a whole. Society, of course, also has benefited from the past century’s increase in oil consumption: The US economy underwent an extraordinary expansion during the 20th century, when cheap oil fostered first the automobilization of the nation and, after World War II, its suburbanization. Oil also made possible a transportation system built around individual mobility and personal convenience that in many respects remains the envy of the world.

But the impending threat of climate change suggests that our reliance on oil has reached a point of diminishing returns. It’s time for a new strategy — a shift to energy efficiency in the short term and to solar and other renewable energy forms in the long term. Such a Global Green Deal would not only reduce ecological damage, but yield substantially more jobs, profits and economic prosperity than today’s system does. Investments in energy efficiency create two to ten times more jobs per dollar than investments in oil and nuclear power — a crucial concern as the economy slides into recession.

Bush is betting that the nation is willing to pay whatever it takes to keep oil flowing, and he may be right. In the House of Representatives, the president’s plan was supported by Democrats and Republicans, labor and corporate interests. In the Senate, much will depend on what kind of pressure is brought to bear on its members.

Americans may ultimately agree with Bush that maintaining their oil habit is worth any price. But we should at least acknowledge the full cost of such a decision — not only for Americans, but for the six billion people we share the planet with.