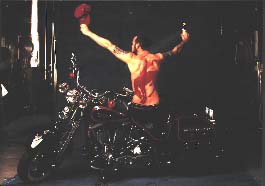 In February, the Great Northern Brewing Company held its second annual Black Star Beer Tattoo Contest, in which the person showing up at the company’s brewery in Whitefish, Mont., with the largest tattoo of the company’s “yahoo-in’ cowboy” logo wins a Harley. This year’s winner was not yet announced at press time; we found out about last year’s winner, Dylan Baker.

Size of Baker’s winning tattoo: 22.9 inches, “measured from the top of the cowboy’s head to the tip of the horse’s hoof,” as per contest rules

Cost of laser removal of a 22.9-inch “yahoo-in’ cowboy” tattoo: several thousand dollars. (Removal could require as many as four individual sessions at least a month apart, each costing as much as $1,000. The larger and darker the tattoo, the more likely that a ghost image will remain.)

Estimated number of participants in the 1999 Black Star Beer Tattoo Contest, based on the number of requests for copies of the logo: 20 to 30

Number of Black Star employees with their own “yahoo-in’ cowboy” tattoos: one. Jason Jepson has a 6-inch cowboy, which he got while he was still in college. He started a Black Star fan club, and eventually was hired to do sales and promotion in Los Angeles. “It’s a great testament to the power of following your dreams,” says Greenlee.