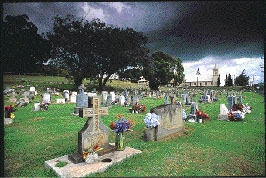 As navel-gazing Baby Boomers begin the last leg of their march toward the great yonder, it’s no surprise that the business of death is coming under increased scrutiny. The popular reissue last year of The American Way of Death, Jessica Mitford’s classic 1963 investigation of the funeral industry, as well as the rise of the do-it-yourself, “natural death” movement, suggest that boomers will not go gently into that good night.

Both Mitford and the granola gravediggers are particularly vocal about the nearly universal acceptance of embalming — which they consider a useless scam. But they’ve overlooked one potential argument against the practice: When we bury our loved ones, we’re also burying a good deal of embalming fluid.

Embalming involves filling the deceased’s arteries and body cavities with formaldehyde (usually a 2 percent solution), which, although it makes a fine preservative, is a known carcinogen. What’s more, the EPA regulates it as hazardous waste. If a funeral home discarded, say, 3.5 gallons of the stuff — roughly the amount needed to embalm the average adult — the EPA could slap it with a fine.

According to Kelly Smith of the National Funeral Directors’ Association, embalming is “the rule of thumb” for the approximately 2 million bodies buried each year in the United States. That means we bury somewhere in the neighborhood of 7 million gallons of hazardous waste annually. Has anyone ever looked closely at what happens to all that formaldehyde? Not really.

EPA groundwater expert Kevin McCormack says that in the 1980s a White House groundwater task force considered cemeteries as one potential pollution source, but determined that the possibility of formaldehyde leaching from graves was not a major risk. “The level of concern was low,” he says. But, he concedes, so was the amount of data. “We did no field research on [our] own,” McCormack says. “I think we looked at some studies.”

This scarcity of data gives some water quality experts pause. “Most technical people are very concerned about it,” says Carl Hauge, chief hydrogeologist for the California Department of Water Resources. Hauge notes that arsenic, a popular embalming agent in the 19th century, has been showing up in groundwater in some areas, and many experts believe cemeteries are a contributor to the problem. If so, Hauge says, “then you’d expect that formaldehyde is going to be showing up, too. But as long as it isn’t being detected, nobody really worries about it.”

Of course, it’s hard to detect something you’re not looking for. EPA guidelines for municipal water authorities don’t recommend testing for formaldehyde, and nobody in the U.S. is systematically monitoring groundwater near cemeteries. Even if formaldehyde did show up in drinking water, local agencies wouldn’t know whether it posed a threat to human health — the EPA has not set a standard for how much formaldehyde is too much. Given its carcinogenicity, says one EPA drinking water official, the question of whether it stays inside graves or finds its way into the water supply is a good one, although he notes it would be a highly localized problem.

In Canada, Ontario’s Ministry of the Environment conducted just such a study in 1992 and found low levels of formaldehyde, but said there was little cause for concern. The same year in Britain, however, researchers found an extremely high concentration (8.6 milligrams per liter) of formaldehyde in seepage water entering a freshly dug grave.

So is it really a threat? Scott Hill, water director for Riverton, Utah, believes it could be. In 1997, he unsuccessfully opposed a plan to build a new cemetery directly uphill from the city’s wells because of concerns about formaldehyde. “A degree of hazard is there,” Hill says. “Rainwater will carry contaminants with it.”

Steel vaults, used in many states to encase coffins, may reduce risk. Still, no one knows how long leached formaldehyde lasts in soil, meaning that any potential health risks might not show up for decades. “Will the vaults last five years? A hundred years? I don’t know,” says Julie Weatherington-Rice, an environmental consultant who has studied arsenic in groundwater.

“[Formaldehyde] is going to show up,” she says. “But it’s going to take a while. We’re probably drinking great-grandmother Maude right now more than we are someone who died last Saturday night.”