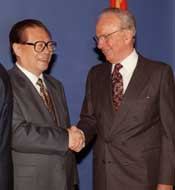 LONDON—When Rupert Murdoch comes on the line, Prime Minister Tony Blair picks up the phone. This is not courtesy, but prudence. The British prime minister owes his 1997 election victory in part to the support of the London Sun, Murdoch’s mass-circulation tabloid that for the two previous decades had thumped the tub for the Conservatives. Blair worked hard for the endorsement and wants to keep it.

Calling in mid-March, the globe-hopping media tycoon wanted to talk about Italy. In his constant, restless quest to widen his empire, he had reportedly made a bid of $6.6 billion for Mediaset, the Italian TV network owned by Silvio Berlusconi, entrepreneur and (briefly) prime minister. Murdoch was worried the deal would be scuppered by hostility to foreign ownership—a prejudice that has plagued him in other markets, especially the U.S.

Before proceeding with the bid, then, Murdoch needed to know how powerful nationalist sentiment was in Rome. Where better to go for a steer than the very top? He urged his good friend Blair to call the Italian prime minister, Romano Prodi, and put the question direct, statesman to statesman. Blair did as he was told. Prodi responded that, while not personally opposed to the Murdoch bid, it might arouse opposition from his partners in the center-left coalition.

Thus alerted, Murdoch’s ardour for Mediaset cooled and the deal went nowhere. Blair’s spokesman at first denied that the prime minister acted as a message carrier for the mighty mogul, but Murdoch was unabashed; the London Times, his influential broadsheet, confirmed that Blair had made the calls.

Apart from a desire to please his friend, Blair had a further motive for complying with Murdoch’s request: The question of Britain’s integration with the European Union is among the trickiest facing his administration. Although many economists believe that signing the European Monetary Union agreement will be beneficial (and, in the long term, probable), opinion polls show that most British electors are against it.

So are Murdoch’s papers, despite their broad support for the government. If Murdoch widens his interests in the European Union, Blair hopes the magnate and his editors will begin to see the virtues in establishing closer links. This would make it easier to sell the concept to the voters.

But Blair’s scheme suffered a setback in June when Murdoch’s Sun renewed its campaign against the proposed Euro, the European single currency, with increased vigour. The front page carried a picture of Blair with the headline, “Is this the most dangerous man in Britain?”

The editorial accused the prime minister of shifting his stance and becoming an advocate of the Euro. “The Sun will not flinch from opposing the Euro,” Murdoch’s paper declared, adding that Blair “has the potential to be a truly great prime minister”—but only, by inference, if he agrees with the master’s voice.

The Big Bad Wolf
Rupert Murdoch has begun to look his age but not to act it. When a man has his 70th year in his sights, the convention is that he should be slowing down, enjoying the sweet rewards of decades of endeavour. For Murdoch—his hair now white and spindly, his leathery face gaunt with loose flesh—convention is there to be flouted. For example, the weeks surrounding his 67th birthday on March 11 saw a burst of headline-making hyperactivity. Before April was out, Murdoch had found time to buy the Los Angeles Dodgers baseball team and acquire a share in a Russian telecommunications company. He had attacked the “whingeing” British Broadcasting Corporation for competing with his Sky news channel and announced a separation from his second wife, Anna, after 31 years of marriage. His Hollywood film company, Twentieth Century Fox, was enjoying an unprecedented hit with Titanic and had purchased the lucrative distribution rights to a new series of Star Wars movies. And he reportedly began exploring a link with Kirch, the German media group that bought the TV rights to the World Cup in 2002.

Yet winter for Rupert had begun badly, with reports from Australia that government officials in his four main areas of operation—the United States, Britain, Australia, and Canada—had joined forces to investigate the tax affairs of News Corporation, his core company. News Corp.’s worldwide revenues from media and associated activities amounted to more than $9 billion last year. By taking advantage of differences in each country’s rules, and by incorporating companies in low-tax regimes such as the Cayman Islands, News Corp. has always managed to keep its tax bill low: Last year it came to only 7.8 percent of income.

In February, the House of Lords sought to introduce legislation to curb what his critics call “predatory pricing”—the practice of taking a loss on the cover price of the London Times—which has enabled the paper to double its circulation in the past five years. The Times‘ less well-bankrolled competitors have suffered from the tactic. Blair’s government, though, has refused to back the Lords’ move. That is what friends are for.

Meanwhile, HarperCollins, the publishing arm of Murdoch’s empire, brought hostile publicity. This was the company that three years ago offered Newt Gingrich $4.5 million for his book and published a widely derided memoir by the daughter of Chinese leader Deng Xiaoping—this at a time when Murdoch was anxious for his Star satellite system to gain official approval in China, with its potential market of 1 billion souls.

China was the subject of this year’s row, too. Senior executives at HarperCollins had secured the rights to a book by Chris Patten, the last British governor of Hong Kong. Patten was unpopular with the Chinese government because of his stubborn insistence on democratic representation after the former colony reverted to China. Murdoch thought the book might upset his Chinese friends, so, at his insistence, HarperCollins canceled Patten’s contract, prompting the resignation of a senior editor and a press furor about freedom of expression. But in Murdoch’s world, all actions are geared to the greater good of the giant News Corp., and ethical considerations customarily take second place to expediency—provoking the London Guardian to dub Murdoch “the big bad wolf of British national life.”

Wining and Dining
Murdoch can boast decades of experience in the black arts of realpolitik, switching allegiance between politicians to further his business interests. He has been a newspaper proprietor for 46 years—much longer than any of his competitors and longer than most world leaders have been in politics. He was 21 in 1952 when his father died, bequeathing him a small newspaper in Adelaide, South Australia, for the purpose, as stated in the will, of “spending a useful, altruistic, and full life in newspaper and broadcasting activities.”

Full it certainly has been; useful, perhaps. At first Murdoch slowly parlayed that single property into an emergent chain; then he added TV stations to the group and by the mid-’60s was influential enough for his political support to count. In the 1972 election his papers backed Gough Whitlam, leader of the Australian Labour Party, but in 1975 they reversed and were instrumental in Whitlam’s defeat by Conservative leader Malcolm Fraser. During Fraser’s tenure, the rules limiting multiple ownership of TV stations were conveniently eased, allowing Murdoch to own stations in many of Australia’s biggest markets. Murdoch’s newspapers supported Fraser throughout, but after his defeat in 1983 by Labour Party leader Bob Hawke, the papers again changed sides. The Murdoch/Hawke alliance was a staple of Australian politics for the next decade.

The Murdoch press in Britain is just as promiscuous with its favors. When he bought the Sun in 1969, it supported Labour, then in power; by 1979, when Margaret Thatcher became prime minister, the paper staunchly supported the Conservatives. His efforts were repaid. When Murdoch bought the London Times and Sunday Times in 1981, the government did not refer the deal to the Monopolies Commission (to the surprise of many, seeing that it gave Murdoch control of four national newspapers).

In September 1994, the Conservatives’ power was waning, and the wooing of Tony Blair began reportedly with a dinner invitation from the Murdochs to Blair and his wife, Cherie. By accepting, Blair risked unpopularity in his party: Labour had passionately opposed Murdoch in 1986 when, to break the London print unions, he moved his newspapers’ production to a nonunion plant.

Blair reasoned that the prospect of support from Britain’s best-selling tabloid made it worth risking trouble from his supporters. So, despite warnings in the non-Murdoch press that Blair was supping with the devil, the courtship continued. In 1995, Murdoch asked the Labour leader to fly halfway round the world to give a talk to his senior executives at Hayman Island, a resort off the Queensland coast. More meals and meetings followed until, six weeks before the 1997 election, the Sun endorsed Blair. If the wooing paid off spectacularly for Blair at the polls, Murdoch can also feel satisfied. Apart from the government’s refusal to outlaw his pricing policy on the Times, there is to be no legislation to protect people’s privacy from the attentions of marauding tabloid reporters. Calls for such laws intensified after the death of Princess Diana, but they would have cramped the style of the Sun and its Sunday stablemate, the News of the World.

An Appetite for Acquisition
Murdoch did not invent sleazy tabloid journalism but he believes fervently that there is no disgrace in supplying any legal commodity for which there is popular demand. He learned in his early years that the most successful papers are those whose headlines scream the loudest. Conrad Black, the Canadian owner of the London Daily Telegraph, describes him as “a cynic who thinks the average person is of fundamentally down-market tastes.”

Nevertheless, Murdoch is sensitive to shifts in the cultural climate. The recent decline in the circulation of the Sun, along with that of most other British tabloids, convinced him that public taste was changing. So in June he acted swiftly, first replacing the Sun’s editor with the deputy editor of the New York Post, and second, orchestrating a maneuver that shows Murdoch at his most ruthless and manipulative: The most successful editor in the Sun’s history had been Kelvin MacKenzie, who held the job from 1982 to 1994. After a spell at British Sky Broadcasting, he joined the Sun’s closest rival, the Daily Mirror, where he was masterminding a number of improvements. The week after the editor change at the Sun, MacKenzie announced he was leaving the Mirror to launch a bid for a radio station—a bid that had substantial backing from Murdoch.

Some view Murdoch’s influence on Tony Blair as a sinister misuse of power by an overmighty subject. But unlike former press barons such as Hearst, Northcliffe, and Beaverbrook, his vacillating political alliances do not suggest that he is seeking to promote any overarching political philosophy.

So what is in it for him? He believes that expanding his empire is the only way to prevent its stagnation. He delights in defying regulations aimed at restricting its growth. Despite his wealth and his punishing peripatetic lifestyle, he is clearly in no mood to wind down (some say that is why his marriage foundered). Though the world’s most powerful media boss, his appetite for acquisition remains undiminished.