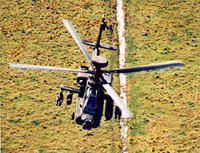 We like to think of arms dealers as hirsute gents in Hugo Boss suits, arguing gutturally into cell phones in Tripoli, Vladivostok, or Islamabad.

Think again. If the Star-Wars-studded exhibitor roster of Dubai Air Show ’97 is any indication, international arms dealing is right at home in Peoria. The Middle East’s biggest air show — Webcast daily for your enjoyment — opened Sunday with Boeing, Lockheed Martin, and Raytheon leading a host of American aerospace firms displaying their hardware, escorted by entourages from the U.S. Departments of Commerce and Defense. Rounding out the roster are household names like Toyota, Rolls Royce, and Saab.

As Saddam Hussein rattles the neighborhood, this year’s show has an especially martial flavor — nearly half the exhibitors are military. The goodies list is juicy — the U.S.’s coveted F-16 jet fighter and Apache attack helicopter are featured prominently — and the market is even juicier: Global military spending last year alone approached an estimated US$1 trillion, with the U.S. and Russia controlling most of the market. Show promoters report that U.S. exhibitors’ presence is up 30 percent this year over Dubai ’95.

And what better place to shop than the United Arab Emirates, where laws governing arms dealing are scarcer than women in public office? Plus, Dubai ’97 will be held right in Dubai International Airport, so you won’t miss that flight to Baghdad — or Seattle.

Got time to kill after your shopping’s done? Catch the Talk of the Town at Dubai’s Chamber of Commerce Web site.