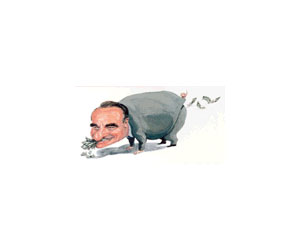 In a February ABC News special, “Freeloaders,” reporter John Stossel called Dwayne Andreas, CEO of food giant Archer Daniels Midland, the country’s “No. 1 welfare mooch” and confronted him with a Mother Jones exposé on corporate welfare (“Dwayne’s World,” July/August 1995): “Mother Jones pictured you as a pig…feeding at the welfare trough.” Andreas, who denies that the $4 million he’s fed to politicians has any relation to the subsidies that benefit his business, replied, “Why should I care?”

Turns out, Andreas does care—he has a penchant for all things pig, so much so that he tracked down the artist, Victor Juhasz, and bought the caricature for $2,500. The picture, Andreas says, “reminds me of when I was a child feeding little pigs.”

Juhasz says he is not surprised by the purchase: “People will buy uncomplimentary caricatures. Ego is blind.”

Energy efficiency efforts at the White House have saved taxpayers close to $500,000 (“Executive Flower Plot,” January/February 1997), and now the Federal Energy Management Program (FEMP) wants to apply its green thumb to other federal facilities, including the Pentagon, San Francisco’s Presidio, and, of course, the Department of Energy. A lucky federal building near you may soon get the same treatment—a CD-ROM due out in September will explain the greening process to the government’s 50,000 building managers.