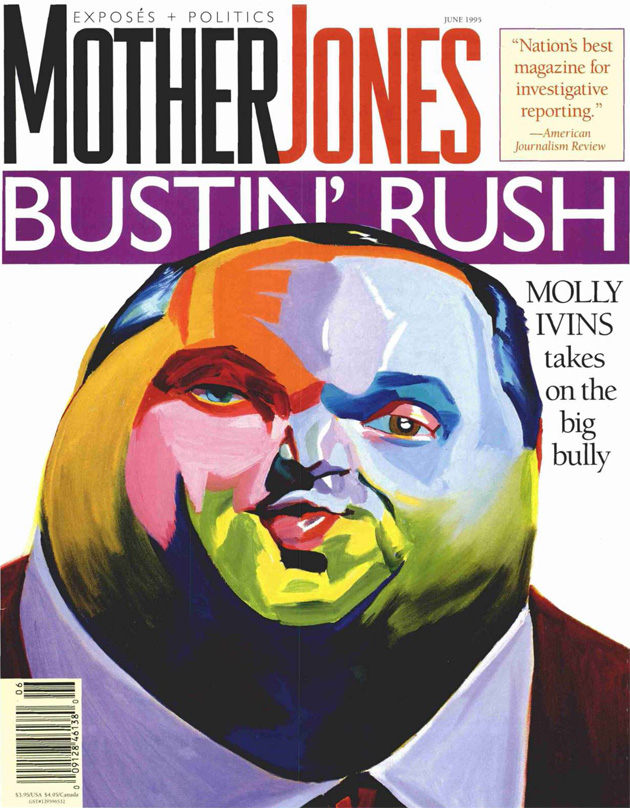 One of the things that concerns a lot of Americans lately is the increase in plain old nastiness in our political discussion. It comes from a number of sources, but Rush Limbaugh is a major carrier.

I should explain that I am not without bias in this matter. I have been attacked by Rush Limbaugh on the air, an experience somewhat akin to being gummed by a newt. It doesn’t actually hurt, but it leaves you with slimy stuff on your ankle.

I have a correspondent named Irwin Wingo in Weatherford, Texas. Irwin and some of the leading men of the town are in the habit of meeting about 10 every morning at the Chat’n’Chew Cafe to drink coffee and discuss the state of the world. One of their number is a dittohead, a Limbaugh listener. He came in one day, plopped himself down, and said, “I think Rush is right: Racism in this country is dead. I don’t know what the niggers will find to gripe about now.”

I wouldn’t say that dittoheads, as a group, lack the ability to reason. It’s just that whenever I run across one, he seems to be at a low ebb in reasoning skills. Poor ol’ Bill Sarpalius, one of our dimmer Panhandle congressmen, was once trying to explain to a town hall meeting of his constituents that Limbaugh was wrong when he convinced his listeners that Bill Clinton’s tax package contained a tax increase on the middle class. (It increased taxes only on the wealthiest 2 percent of Americans.) A dittohead in the crowd rose to protest: “We don’t send you to Washington to make responsible decisions. We send you there to represent us.”

The kind of humor Limbaugh uses troubles me deeply, because I have spent much of my professional life making fun of politicians. I believe it is a great American tradition and should be encouraged. We should all laugh more at our elected officials—it’s good for us and good for them. So what right do I have to object because Limbaugh makes fun of different pols than I do?

I object because he consistently targets dead people, little girls, and the homeless—none of whom are in a particularly good position to answer back. Satire is a weapon, and it can be quite cruel. It has historically been the weapon of powerless people aimed at the powerful. When you use satire against powerless people, as Limbaugh does, it is not only cruel, it’s profoundly vulgar. It is like kicking a cripple.

When viewers objected, he claimed, in typical Limbaugh fashion, that the gag was an accident and that without his permission some technician had put up the picture of Chelsea—which I found as disgusting as his original attempt at humor.

On another occasion, Limbaugh put up a picture of Labor Secretary Robert Reich that showed him from the forehead up, as though that were all the camera could get. Reich is indeed a very short man as a result of a bone disease he had as a child. Somehow the effect of bone disease in children has never struck me as an appropriate topic for humor.

The reason I take Rush Limbaugh seriously is not because he’s offensive or right-wing, but because he is one of the few people addressing a large group of disaffected people in this country. And despite his frequent denials, Limbaugh does indeed have a somewhat cultlike effect on his dittoheads. They can listen to him for three and a half hours a day, five days a week, on radio and television. I can assure you that David Koresh did not harangue the Branch Davidians so long nor so often. But that is precisely what most cult leaders do—talk to their followers hour after hour after hour.

A large segment of Limbaugh’s audience consists of white males, 18 to 34 years old, without college education. Basically, a guy I know and grew up with named Bubba.

Bubba listens to Limbaugh because Limbaugh gives him someone to blame for the fact that Bubba is getting screwed. He’s working harder, getting paid less in constant dollars and falling further and further behind. Not only is Bubba never gonna be able to buy a house, he can barely afford a trailer. Hell, he can barely afford the payments on the pickup.

And because Bubba understands he’s being shafted, even if he doesn’t know why or how or by whom, he listens to Limbaugh. Limbaugh offers him scapegoats. It’s the “feminazis.” It’s the minorities. It’s the limousine liberals. It’s all these people with all these wacky social programs to help some silly, self-proclaimed bunch of victims. Bubba feels like a victim himself—and he is—but he never got any sympathy from liberals.

Psychologists often tell us there is a great deal of displaced anger in our emotional lives—your dad wallops you, but he’s too big to hit back, so you go clobber your little brother. Displaced anger is also common in our political life. We see it in this generation of young white men without much education and very little future. This economy no longer has a place for them. The corporations have moved their jobs to Singapore. Unfortunately, it is Limbaugh and the Republicans who are addressing the resentments of these folks, and aiming their anger in the wrong direction.

In my state, I have not seen so much hatred in politics since the heyday of the John Birch Society in the early 1960s. Used to be you couldn’t talk politics with a conservative without his getting all red in the face, arteries standing out in his neck, wattles aquiver with indignation—just like a pissed-off turkey gobbler. And now we’re seeing the same kind of anger again.

Fairness & Accuracy in Reporting, the organization that provided the absurd Limbaughisms that you see to the right, has a sweet, gentle faith that truth will triumph in the end, and thinks it is sufficient to point out that Limbaugh is wrong. I say it’s important to point out that he’s not just wrong but that he’s ridiculous, one of the silliest people in America. Sure, it takes your breath away when he spreads some false and vicious rumor, such as the story that Vincent Foster’s body was actually discovered in an apartment owned by Hillary Clinton. Or when he destroys an important lobby-control bill by falsely claiming that it would make the average citizen subject to lobbying laws. Yes, that’s sick and perverse.

But it’s important to show people that there is much more wrong with Limbaugh’s thinking than just his facts. Limbaugh specializes in ad hominem arguments, which are themselves ridiculously easy to expose. Ted Kennedy says, “America needs health care reform.” Limbaugh replies, “Ted Kennedy is fat.”

Rush Limbaugh’s pathetic abuse of logic, his absurd pomposity, his relentless self-promotion, his ridiculous ego—now those, friends, are appropriate targets for satire.

Molly Ivins is a contributing writer to Mother Jones.