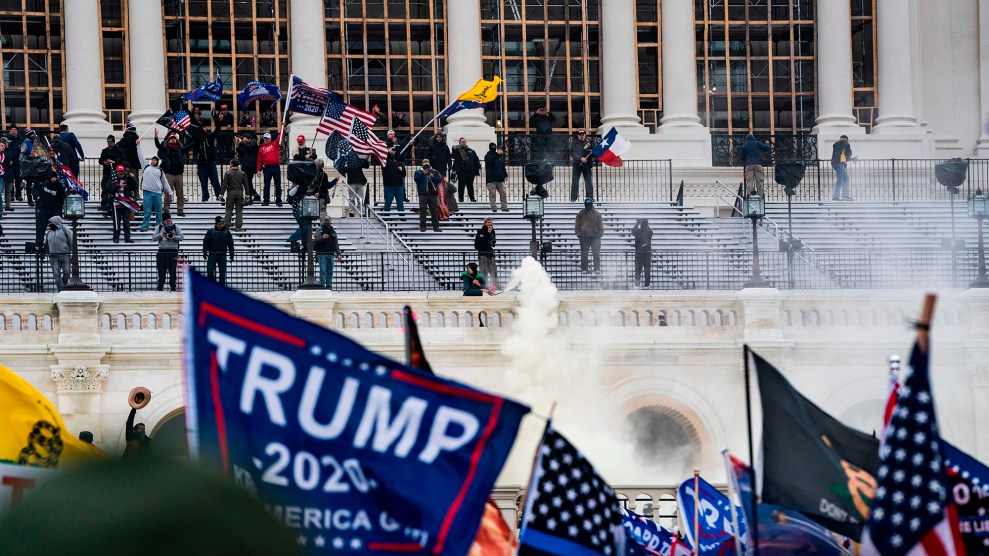 When most Senate Republicans voted to acquit former President Donald Trump of inciting the deadly riot at the US Capitol on January 6, a few offered a different avenue for justice: the courts. On Friday, Rep. Eric Swalwell (D-Calif.), who served as one of the impeachment managers, filed suit in federal court in DC to answer that call and hold Trump and three close associates accountable for the attack.

The complaint itself quotes Senate Minority Leader Mitch McConnell’s statement that Trump is “practically and morally responsible for provoking the events of the day” and that “[w]e have a criminal justice system in this country. We have civil litigation. And former presidents are not immune from being held accountable by either one.” Other Republicans echoed this sentiment.

Philip Andonian, a DC-based attorney and one of the lawyers who filed the case, tells me they’re taking action because Trump “has not been held officially liable… A federal judge saying that would be a very powerful and necessary statement.”

The new lawsuit takes aim at four individuals—former president Trump, his son Donald Trump Jr., his attorney Rudy Giuliani, and Rep. Mo Brooks (R-Ala.)—alleging that they violated federal civil rights law and local DC laws by inciting the insurrection. “The horrific events of January 6 were a direct and foreseeable consequence of the Defendants’ unlawful actions,” the complaint states. “As such, the Defendants are responsible for the injury and destruction that followed.”

It claims the group conspired to violate the civil rights of members of Congress gathered to do their official duty in certifying the November election. “We’ve alleged the conspiracy to interfere with Congress’ certification vote,” says  Andonian. “That much is, in our view, crystal clear.”

This particular allegation is similar to those in another lawsuit recently brought against Trump and Giuliani, as well as the Proud Boys and Oath Keepers—two of the violent groups involved in the riot—by the NAACP on behalf of Rep. Bennie Thompson (D-MS). While Thompson’s case includes those who perpetrated the violence on January 6, Swalwell’s case focuses more on the allegations of conspiracy among Trump’s inner circle. Andonian says not including those who partook in the actual violence is not weakness in the case. “As a general matter of conspiracy liability, if you form an illegal agreement and it’s carried out and things happen in the course of carrying it out that are reasonably foreseeable, then you’re on the hook for it even if you didn’t do it,” he says.

Friday’s case also charges Trump, Trump Jr., Giuliani, and Brooks under local DC laws against inciting rioting and terrorism. “We also think it’s equally clear that what these four defendants in particular did at the rally was directly incite the violence right before it happened,” says Andonian. “And that is unlawful.”