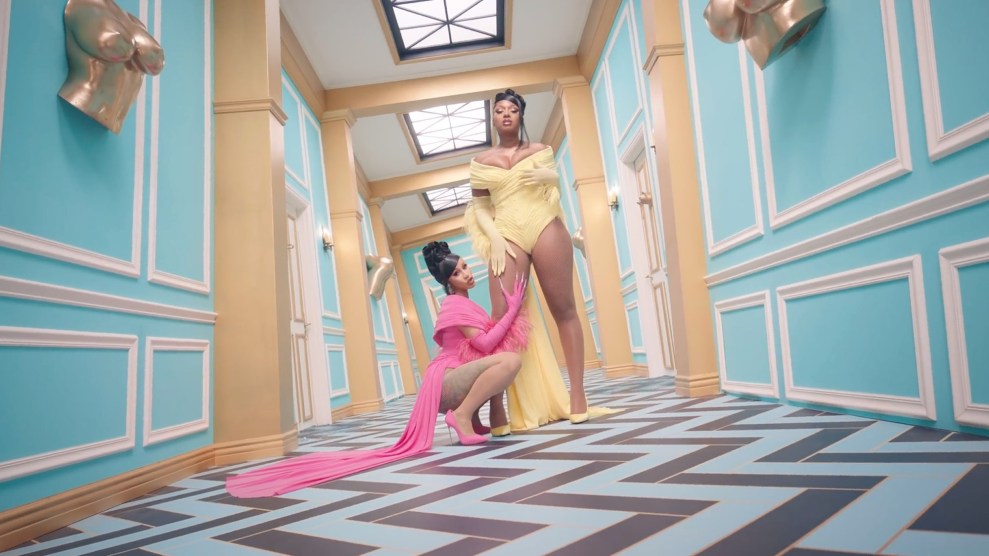 Last summer, when Megan Thee Stallion and Cardi B released “WAP”—which stands for wet-ass pussy—conservatives had a collective conniption fit. Prepare my fainting couch, the pearl clutchers wailed. At the time, I wrote that conservatives were offended by WAP because it was a song about Black women using their bodies not for labor, what conservatives seem to believe is the traditional function for a Black woman’s body, but for enjoyment.

Well, it’s been seven months, and they still have WAP on their minds. Today, you can find your local right-wing hysteric lamenting the fact that everything from Dr. Suess to Mr. Potato Head has been cancelled, and nonetheless WAP reigns supreme. Never mind that the song has absolutely nothing to do with children’s books or toys, the relentless conservative obsession with WAP finds it convenient to somehow conflate them.

It’s not the only song about sex one can hear on a regular basis, and it’s certainly not the only vulgar music the youths are listening to today. (Let me introduce you horrified Fox News hosts and other guardians of all that is right and good about America to my favorite Spotify playlists!) But, like so many of the problems facing conservative America, the connection that exists among cancelling Mr. Potato Head and Dr. Seuss, while permitting WAP to reign supreme, is ultimately the responsibility of Black people—or at least whatever stand-in word we’re using for Black people these days.

A few weeks ago the Dr. Seuss estate announced that of the approximately 39 books Theodore Seuss Geisel wrote, six of them with racist and offensive imagery would no longer be in circulation. It was a carefully considered business decision, but conservatives, like comedian Tim Young, behaved as if this was only the first step on a slippery slope, and soon the President of the Woke Mob would replace all children’s books with sexy rap lyrics.

The lyrics to 'Wet Ass Pussy' are more welcome in some schools than Dr. Seuss books… just let that sink in for a minute.

Your conservative relatives, who mainline Fox News from dawn ‘till dusk, have concluded that liberal teachers, who are planted in public schools like some communist cells from another era, are teaching children all over the country all this woke nonsense. The cherished and totally illusory Leave-It-To-Beaver version of the country will soon be replaced by first graders chanting WAP lyrics—”there’s some whores in this house, there’s some whores in this house”—every morning before the bell rings instead of the Pledge of Allegiance. (And we all know the violence that the libs inflicted on school prayer.)

Adding a little fuel to the flames, it didn’t help that Cardi and Meg performed their hit song at the Grammy’s on Sunday night, an awards show that literally exists for many of the same people who write and perform songs like WAP.  The timing was propitious. Not only had Dr. Seuss been obliterated, but the company that makes the potato toys had recently announced that they were dropping the “Mister” part of the name. The reasoning was so that children could make whatever kind of families they wanted. They later reassured customers that Mr. and Mrs. Potato Head would continue to exist.

It’s unclear what the point of the announcement was (and I don’t care because I am an adult), but the main takeaway was that concerned parents could sleep soundly at night knowing that plastic potato heads were still available to children far and wide. Enter Dave Rubin, a conservative YouTube show host, who connected the Grammy WAP performance with the so-called cancellation of Mr. Potato Head. “We took out Mr. Potato Head because he was a Mister,” he complained, “but we have [WAP]…that’s all okay.”

Dave Rubin was disturbed by 'WAP' performance at the Grammys, laments double standards in culture. pic.twitter.com/HngJ6RsUSl

Conservatives are up in arms! First, Black people demand to stop being killed by police, now my potato toys and Dr. Seuss? What’s next? Women in the workplace? A woman of color as vice president?

Conservatives are amplifying this non-issue because they’re hoping their followers, fans, and viewers would be distracted from the fact that they’ve already lost the most important battles that actually mean something in individual lives. The vaccine rollout, the COVID relief bill, action on climate change, fixing our dismal health care system—these are the issues that non-Fox News viewers, and even some Fox viewers as well, care about. According to recent polling, 41 percent of Republican voters are in favor of President Joe Biden’s massive COVID relief bill. Republicans and right-wingers know they can show nothing in terms of policy or achievements to present as arguments against any of those major issues. So, they’ll just ignore them all and pretend that this country’s most the most pressing emergency is that Black rappers are rapping about sex and your kids will have to settle for Green Eggs and Ham (still being published and sold!) for their bed time story instead of If I Ran the Zoo.

I almost feel sorry for right-wing ideologues. They used to be so good at creating a boogeyman to terrify their increasingly isolated supporters: A Black president run amok, caravans of immigrants coming to take your jobs, and of course, the always-looming specter of full equality. They tested out die for the economy during a pandemic last spring, but it just didn’t have the same oomph as Mr. Potato Head provides.

Of course, conservative grievances always have been performative, but the discourse around WAP has reached such new levels of farce that I find myself genuinely confused. Are people like Rubin and Young simply performing for the outrage machine? Or, seven months after WAP hit number one on the charts, maybe they finally really believe their own bullshit.