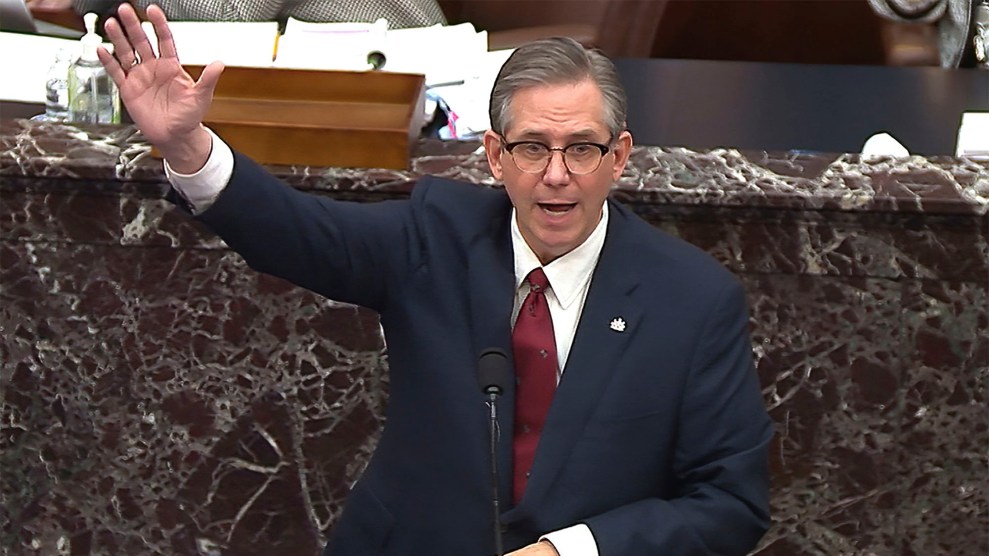 Bruce Castor, an attorney for former President Donald Trump, speaks during the second impeachment trial of Trump in the Senate at the U.S. Capitol in Washington, Feb. 12, 2021. Senate Television/AP

Donald Trump’s legal team vowed they would not litigate his false claims of voter fraud during the former president’s impeachment trial. But on Friday afternoon Trump lawyer Bruce Castor could not help himself, defending the call where Trump pressured Georgia secretary of state Brad Raffensperger to “find 11,780 votes.”

Trump may be gone from office, but his anti-democratic lies could still win.

There was nothing improper about Trump’s call, Castor claimed, because Trump was simply inquiring into voting irregularities, including the “inexplicable” drop in mail-in ballots rejected for signature errors in 2020 compared to 2018.

Castor’s assertion was false: the number of mail-in ballots rejected for signatures issues was the same in 2020 as it was in 2018. An audit in Cobb County, Georgia, found just two mismatched signatures out of 15,000 mail-in ballots analyzed. Neither instance was found to be a case of fraud.

The claim, while easily contradicted, was nevertheless revealing: It shows Trump’s legal team sticking by “the Big Lie,” the false assertion that a legitimate victory was stolen from Trump—a lie that gave birth to the insurrection at the Capitol. It wasn’t the only time during the trial they made the same dance. In Friday’s Q&A session, when Senator Bernie Sanders asked Trump’s team if Joe Biden had won the election, Trump lawyer Michael van der Veen refused to say, calling the issue “irrelevant.”

“No, it isn’t!” Sanders shouted back. “You represent the president of the United States!”

Indeed, state-level Republicans are already weaponizing Trump’s lies to pass new laws that would make it harder for Democratic constituencies to vote. The widespread and false belief of a stolen election has been cited by Republicans in states like Arizona, Georgia, and Pennsylvania to roll back mail-in voting and erect new barriers to the ballot box. Those initiatives make up just some of the 165 new voting restrictions already introduced in 33 states in 2021, according to the Brennan Center for Justice.

Democrats did not have the 67 votes needed to convict Trump at his impeachment trial. But they do have the votes to pass two pieces of federal legislation that would protect and expand the right to vote—the John Lewis Voting Rights Act and the For the People Act—if they are willing to eliminate the filibuster. If they don’t seize the chance, new state-level GOP restrictions on voting could keep Democrats from ever being in the same position again.