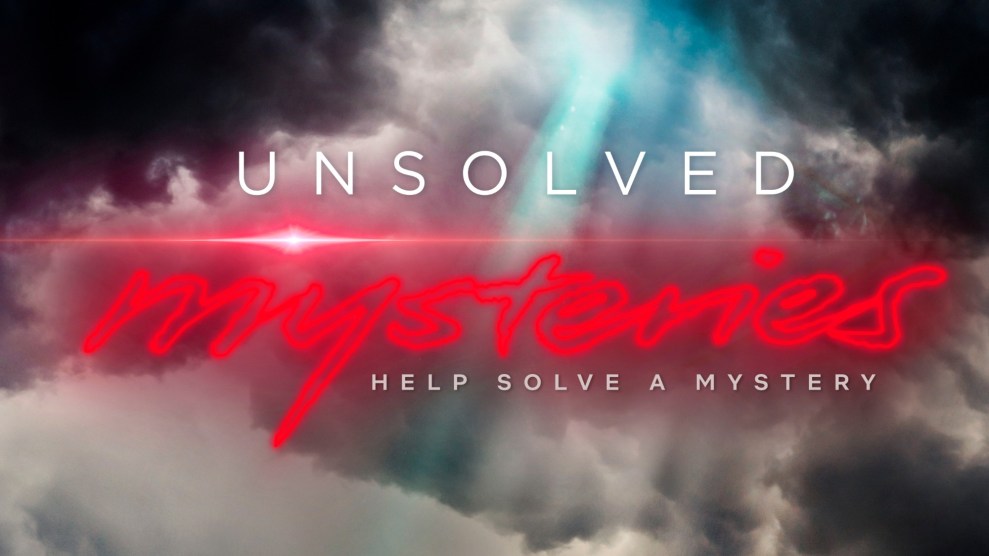 For more than two decades, the theme to Unsolved Mysteries—the cult classic ’90s true crime/paranormal investigation TV show that was equal parts terrifying and mind-numbingly silly—has haunted my dreams: a chilling, synth-laden earworm that seeped into my subconscious.

I thought I could escape, or expel, the parasite. But because no intellectual property is truly dead until it is also a Netflix show, Unsolved Mysteries is back. And so is the song.

Unsolved Mysteries paved the way for the gorge of true crime shows and podcasts that have dominated pop culture in recent years. Most episodes focused on a mysterious murder or a bizarre disappearance that often didn’t make national newspaper headlines or evening news programs. Each episode blended cheesy reenactments with interviews with the real-life people involved in each case, ruminating on theories as to what might have happened. Sometimes, the show dipped into the paranormal, with stories of UFO abductees and unexplained sightings of ghastly specters. And at the end of each episode, host Robert Stack, often sporting his trademark trench coat that made him look like a character ripped straight from the pages of a Raymond Chandler novel, would address the camera and ask viewers to contact the show if they had any information to help solve one of the featured mysteries.

None of this might seem that novel now, considering how overcrowded the true crime genre is these days, but it was special then. Still, there’s one thing that both the original Unsolved Mysteries, and now its revival, have that no show in the genre does: A fucking terrifying theme song.

When I turned on the reboot, I could remember, like Proust with his madeleines, watching as a kid, the hairs on the back of my neck raised. “We used to get letters all the time from parents saying, ‘Could you please change the theme music? Our children are terrified of it,’” Gary Malkin, who co-wrote the show’s signature theme song, recently told the Los Angeles Times.

I disagree. I am scared. But, also, I am a fan. Do not change the song. That theme song, and the rest of the show’s eerie soundtrack, isn’t just terrifying, it’s fantastic.

As an avowed horror fan, I’ve come to develop an affinity for the soundtracks that score some of my favorite spooky films and shows: the minimalist piano jingle of John Carpenter’s Halloween; the signature ki ki ki ma ma ma of Friday the 13th; the mysterious whistling of the X-Files. Unsolved Mysteries‘ theme is as iconic in the horror soundtrack world as all of these. Carpenter said the score’s drone “sets up a kind of inevitability.” The feeling? “Dread,” he said.

Like many fans of the original series, I was skeptical when I heard that Netflix would be reviving it. For starters, Stack, the original host, had died in 2003 and the attempts to replace him in later seasons didn’t work out so well. Who could possibly fill that trench coat-sized hole?  As it turns out, no one could; the new reboot doesn’t have a host.

But most importantly, if the new Unsolved Mysteries didn’t have the same theme song, it simply wouldn’t be Unsolved Mysteries. Thankfully, the show’s producers didn’t just keep it intact, but offered an update score that’s somehow creepier than the original.

A post shared by Unsolved Mysteries (@officialunsolvedmysteries) on Jul 1, 2020 at 8:00am PDT

It took me years to get the original theme out of my head when I got even mildly scared. Now, I have to start all over again.