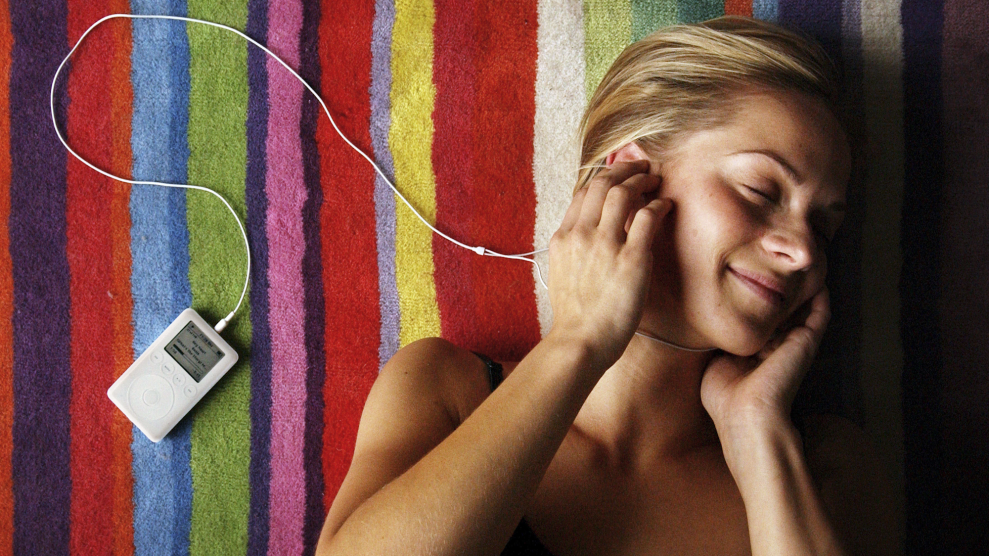 Most of Mother Jones is working from home. The organization decided it would be best (and it is best) that we all make less contact with the outside world. And, while I can only speak for myself, it’s been quite the dream. (Editor’s note: It has been a nightmare.)

The ability to work from home is a privilege that I’ve never experienced before, and that many still cannot. It’s blown my mind that this can be someone’s life. Among the many perks—no commute, fresh-cooked meals, fuzzy coworkers with four legs—is the ability to play music loud, even dance (one can at an office, but will likely endure never-ending shame).

I asked some of my colleagues to share some of the tunes they’ve been vibing to, working to, and slacking off to. Here’s what they sent:

“All Things Must Pass” by George Harrison

I think everyone, including myself, is freaking out a little bit right now. George Harrison reminds us that “it’s not always going to be this gray.” Plus, I also like the more spiritual songs on the album. I find “My Sweet Lord” to be very calming. — Abigail Weinberg, Digital Media Fellow

This is such a great work from home album to jam to. Every song on the record is a hit. It makes you want to dance, but not so much so that you end up dancing and not working. It’s more of a toe-tapper. And you can belt out the choruses in privacy. They also have a warm vintage feel which makes your WFH prison a little cozier. — Cathy Asmus, Development Systems and Marketing Manager

I’ve been lulled into daydreams by this j-pop EP, which fuses funky electronica with the kind of emotive feminine vocals you hear in the closing credits of anime shows. I discovered DADARAY when their bassist, Masao Wada, appeared on Netflix’s Japanese reality show Terrace House, which to be honest is the content you really need for your quarantine. It’s a strangely calming window into Japan’s shifting cultural norms—think The Real World, but way more chill. Wada enters the house in Part 6 of its “Opening New Doors” season, which features some ultra-complex girl drama whose explosion demolishes the fourth wall to reveal how reality show stars calculate their on-screen portrayals. Best enjoyed with an ice cold glass of Emergen-C. — Delilah Friedler, Editorial Fellow

I usually spend my mornings consuming podcasts and news updates and leave the afternoon for music. I’m a fairly active person so dancing around my apartment is kind of a necessity during quarantine times, to shake off some of that excess energy and loosen up some of the stir crazy. Most of my picks stay in the dancey realm (save me from my melancholy self) and dip into a bit of nostalgia. — Grace Molteni, Designer

Their mellow, soul vibes are one of the very, very few things standing between me and mental collapse right now. I’ve always been a casual fan of Tame Impala, but only recently with the release of their new album did I realize like just how good their music is. The music sets mood and tone, almost to the point of being visual. They help me daydream and take a mental vacation, which has become increasingly important in recent weeks. — Camille Squares, Editorial Fellow

I Could Live in Hope by Low

The band Low makes relaxing, hypnotic, melancholy, lonely, chilling, unnerving music that makes me feel like I’m floating in a nice swimming pool but also about to be drowned. I wonder why I’m listening right now? It’s beautiful out; I’m afraid to leave my house. Hanging out at home, totally free to be alone, I’ve needed to relax while also acknowledging, yes, it’s creepy and I’m a bit freaked out. Their 1994 album “I Could Live in Hope” has been helpful. “I know we’re going to make it,” lead singer Alan Sparhawk whispers into a terrifying ambiance. I’m going to try to live in hope, even a haunted one. — Jacob Rosenberg, Assistant Editor

“Everybody’s Gotta Live” by Love, “Let’s Get Out Of This Country” by Camera Obscura

Lean into all of “Everybody.” Strum your guitar to this soulful gem from 1974 that doubles as an ad-hoc therapy session. “Let’s” is jangly tune to help you fantasize leaving a country with a frighteningly underwhelming response to the ongoing global pandemic. — Mark Helenowski, Resident Filmmaker

During the outbreak, I’m mostly listening to acoustic cover songs (Pandora station: Coffeehouse Covers). The soft melodies and familiar lyrics help keep my nerves under control and my mind off the fact that all my local stores are out of hand sanitizer. — Jackie Mogensen, Assistant Editor

The Common Task by Horse Lords

I like to listen to more atmospheric music when I’m working from home, it helps put me in a productive mindset. Horse Lords’ music is a bit more fractal and chaotic than the usual New Age-y, ambient stuff I typically jam at home, but their music—and this new album, The Common Task, in particular—is cerebral and jubilant. Sort of puts me in a mood to bop back-and-forth and dig into whatever chaos I’m reporting on that day. — Matt Cohen, Editorial Fellow

This track is three hours of joyful, ambient techno that’s both meditative and high energy. It helps me concentrate and also makes me feel like my work is kicking ass. It just gets me in the zone. — Molly Schwartz, Digital Media Fellow

“Never Come Back” by CARIBOU

Starts off slow, so makes you think that it is acceptable normal work music, but builds up to a solid house jam. And since you’re not surrounded by coworkers, no compunction against getting up and having a brief solo dance party when it picks up. — Patrick Caldwell, News Editor

The Meadowlands by Wrens

As we all begin to quarantine ourselves, and time starts to really slow down, I’ve been listening to The Wrens’ 2003 record The Meadowlands, an underdog indie/emo masterpiece from the bowels of New Jersey. The band has been working on their follow-up ever since, which is supposed to come out later this year. Having been in isolation for two whole days, I’m confident that I now fully understand what it is to spend almost two decades recording an album. What’s much less clear is what comes next: the release date or a Covid-19 vaccine. — Will Peischel, Editorial Fellow

No One Else Can Wear Your Crown by Oh Wonder

It’s just the right balance between the bright pop music of Tove Styrke and the Tumblr sad-pop of The xx’s xx. It’s an album of both danceable bops and focus-ready ambient tracks. “Happy” is a standout, a crescendo of strings and synthesizers, it’s a fun pop take on a classical instrument. — Sam Van Pykeren, Digital Production Fellow

For a Spotify playlist of all these, click here.