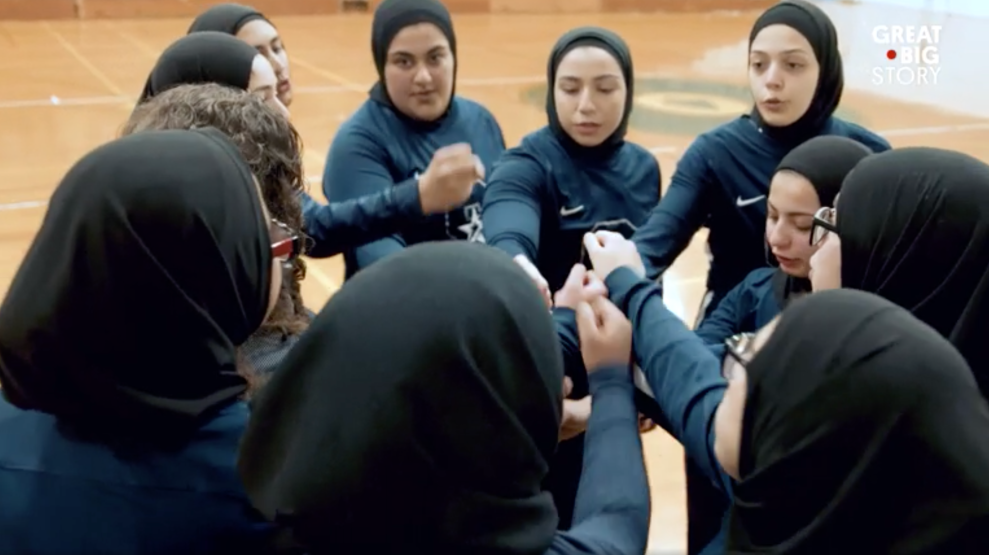 Their opponents are in gym shorts and jerseys on the court. The Salam Stars, in long-sleeve shirts, sweatpants, and hijabs, huddle and stretch before taking their positions. “Sometimes we see [our opponents] laughing” at us, says Jumana Badwan, captain of the Stars, the girls basketball team at an Islamic academy in Milwaukee. “Sometimes we see them whispering to each other [about us].”

The Stars have found ways to confront and see through the looks of suspicion and surprise from opponents: Last year the team finished 14–4. This year their goal is simply to play their hardest.

Badwan, a senior, tells Great Big Story that the team gains strength and solidarity from a disciplined coach, Kassidi Macak, who grew up five minutes from the school but had no connection with the Muslim community whose players she is training.

The history of exclusion and inclusion in basketball and sports broadly is never far from the mind of Macak, who doesn’t let up on her players. She challenges them on and off the court to play for more than points: The students team up to break boundaries in basketball, but also dispel myths and challenge assumptions about what Muslim girls and women—in hijabs or not—are setting out to tackle.

“We’re a small family, and we take on any task together,” Macak says. “We support each other.”

Shutting down poison. Scientists at the Environmental Protection Agency wanted to ban a neurotoxic pesticide suspected of causing lower birth weights, lower IQ, and attention deficit disorder. Higher-ups at the EPA, however, were fine with chlorpyrifos, although California, Hawaii, and New York banned it. Now, the pesticide’s biggest US supplier, Corteva, has decided it will stop making it. Corteva’s decision to halt pesticide sales came on the same day that California’s ban on the chemical took effect. “Due to this reduced demand,” the company announced, “Corteva has made the strategic business decision to phase out our production of chlorpyrifos in 2020.” Jennifer Sass, a senior scientist at the Natural Resources Defense Council, called the move “a victory for our kids, farmworkers, and rural communities nationwide.” (Mother Jones)

Stopping Russian hackers. Estonia, right on Russia’s border, could teach the United States a thing or two about stopping Kremlin disinformation. Russia launched cyberattacks on its neighbor in 2007, but Estonians fought back. Now there’s a growing nationwide volunteer organization devoted to stopping Vladimir Putin’s campaigns of disinformation and deception—and it would be willing to help the United States, if Americans wanted. “We decided we just have to become much more resilient, and make sure, in case something similar happens again, we will be ready,” says Heli Tiirmaa-Klaar, Estonia’s ambassador at large for cyberdiplomacy. (Christian Science Monitor)

Equal time. Finland has decided: seven months of paid family leave for each parent. The decision was made by 34-year-old Prime Minister Sanna Marin and her four other governing coalition parties, all led by women. A single parent will have access to the seven-month allowance for both parents. The decision was lauded inside and outside the country. That’s “what happens when women lead politics,” NPR’s Diaa Hadid tweeted. The goal is to promote gender equality and raise the birth rate. Last year, Finland had the fewest babies born since 1868, when a famine struck. (NPR)

Recharge salutes: The Kansas City Chiefs’ Derrick Nnadi, who made good on his promise to pay for 100 dog adoptions if his team won the Super Bowl; and 91-year-old scientist Dr. Ananda Prasad, who challenged conventional wisdom to show that zinc could cut the duration of the common cold.

I’ll leave you with a big welcome back to NASA’s Christina H. Koch, who set a women’s astronaut record of 328 consecutive days in orbit. Have a great week ahead!

This morning, family, friends and coworkers were reunited with the astronaut, who landed in Kazakhstan on February 6 after a record-breaking 328-day mission to the @Space_Station. #CongratsChristina! pic.twitter.com/z5PceKIHI7