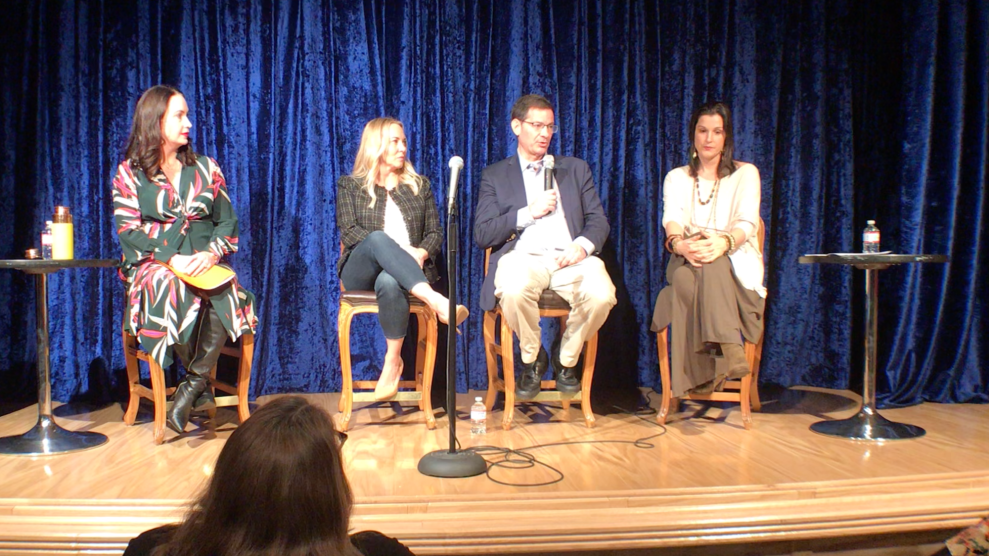 Mark Halperin speaks on a panel in San Francisco on "cancel culture, #MeToo, responsibility and reintegration into society and livelihoods."Courtesy Paul Wilke

One afternoon last week, disgraced political pundit Mark Halperin and three women settled onto stools in the basement of a small theater in San Francisco to talk about the injustices of cancel culture and the indignity of being shamed, shunned, and ignored. Only two other journalists and I showed up. The rest of the audience consisted of employees from the public relations firm that organized the event, Upright Position Communications.

Halperin has been “canceled” since October 2017, when 14 women accused the Game Change coauthor of unwanted sexual advances and groping during and after his tenure as the political director of ABC News from 1997 to 2007. He lost a book deal; he lost a miniseries deal based on the book deal; he lost a Showtime hosting gig and his job as an MSNBC senior political analyst.

Getting canceled has come to mean anything from getting dragged on Twitter to losing your career and livelihood. Perhaps the only thing more common than getting canceled (see: Scarlett Johansson, Kanye West, the year 2020 and “love“) are the concerned op-eds, essays, news articles, podcasts, videos, and social media posts asking whether cancel culture has gone too far. It’s an opinion so mainstream Taylor Swift has written songs about it. Onstage last week, Halperin joined the chorus—at one point suggesting that the canceled are treated less fairly than murderers.

“It’s akin to being a refugee, or being in some other situation where you’re constantly under pressure and can’t stop to, unless you’re a super strong person, you can’t stop to try to rebuild that kind of confidence and self-worth that is required,” he said. After he likened life after being canceled to post-traumatic stress disorder, I asked him whether he thought of his own experience as a trauma. He said no. Throughout the event, Halperin avoided discussing the specifics of his situation but said he was describing the experiences of unnamed canceled people he has spoken with in the last two years, people “who have committed a wide range of acts—some nothing wrong at all.” Those people, Halperin said, are unable to get what he considers to be a “basic right—not just justice for them, but justice for society.”

“It’s akin to being a refugee,” Halperin said of being canceled.

Upright Position Communications had pitched the panel to journalists as a “closed door” discussion on “cancel culture, #MeToo, responsibility and reintegration into society and livelihoods.” The moderator was a PR consultant. According to Paul Wilke, the firm’s CEO, none of the speakers were clients, and the event was a “passion project” for his team. If any future clients came of it, he told me, “that’s a bonus.” I showed up out of morbid curiosity, wondering if I would witness a good-faith discussion of the issues, an attempt to rehabilitate Halperin’s personal brand, or a tone-deaf pity party. What I found was a muddled “all of the above.”

On stage with Halperin was the CEO of a company called Kickass Masterminds who became infamous in 2019 for shaming a job applicant by posting her bikini photo on the corporate Instagram feed. “Hi, my name is Sara Christensen, and I was attacked by the cancel culture mob last fall,” she opened. Christensen claimed she had received “thousands and thousands of death threats and lots of aggressive messages,” forcing her family to move. Getting canceled, Christensen said, feels “like you’re getting a million paper cuts between your toes and someone’s pouring lemon juice on them.” She now teaches business leaders how to prepare for cancellation, helping them anonymize their personal data and fine-tune their messaging.

On Halperin’s other side was Jennie Willoughby, the ex-wife of former White House aide Rob Porter, whose account of domestic abuse contributed to his resignation in 2018. “In my experience of being quote-unquote ‘canceled,’ I wasn’t,” she acknowledged. But she had faced online attacks, not for exposing Porter, but for being unwilling to totally condemn him. (In an interview with Anderson Cooper she had said Porter was “not a monster. He is an intelligent, kind, chivalrous, caring, professional man. And he’s deeply troubled and angry and violent. I don’t think those things are mutually exclusive.”) Since then, Willoughby has emerged as a public speaker on resilience and a counselor to both survivors and perpetrators of abuse. Her goal, she told me, is “soul healing.”

Among those whose souls she’s tried to heal: Mark Halperin. Last year, after she speculated in a Washington Post op-ed that if men like her ex-husband were sufficiently contrite, they might be allowed to return to public life, the former pundit reached out to her. Together they filmed a 17-minute video in which Halperin apologized for mistreating women at ABC News and promised to advocate on behalf of sexual harassment survivors. He did not clarify whether he still disputes specific allegations against him, such as slamming a woman into a wall, masturbating in front of another, and pressing an erection through his clothes onto three others. Yet he repeatedly emphasized that he has attempted to apologize to all the women he mistreated. He posted the video to his YouTube channel last October, eight days before the publication of his latest book, How to Beat Trump.

The book was seen as yet another attempt by Halperin to reclaim the career he’d lost after the sexual harassment revelations. Since last spring, he has produced a political newsletter, “Mark Halperin’s Wide World of News.” He’s appeared on radio shows and podcasts, and reportedly collaborated with MSNBC hosts Joe Scarborough and Mika Brzezinski on a scrapped, online-only program that would have analyzed the 2018 midterms. When the video with Willoughby came out, one of his victims told the Daily Beast, “It seems like we were really moving forward in a positive direction and then all of a sudden this book is [coming] out and he’s trending on Twitter and I’m like ‘This guy, he’s back again.'”

Halperin told me he’d agreed to write How to Beat Trump after being approached by the publisher, and only because it might make money. (It didn’t.) “I haven’t had a job interview in two years,” Halperin said, adding that he has applied to work at restaurants and Target, trying to get health insurance for his three-year-old son. He’s not sure if his struggle to find work is because of his reputation or because he’s a man in his mid-fifties. He told me he doesn’t want to work in journalism again. According to a pitch Upright Position Communications sent to one of my colleagues, he was planning to hold “office hours” the next day to offer “a seasoned veteran’s take on what’s next” in the 2020 elections.

During the panel, Halperin repeatedly spoke of the need for “justice in our system,” a process by which “people who are hurt can be made as whole as possible by people who hurt them, but at the same time there’s some sense of going forward.” He called out businesspeople, religious leaders, and university presidents for not supporting the canceled. And he argued how unfair it was that some people must face consequences for their actions while others, like Donald Trump, do not. Society, he said, doesn’t want to “admit the randomness, or the lack of compassion, or the lack of justice, even for someone who’s done something wrong like I did.”

It was a genius bit of spin: If I disagreed with his call for “compassion” and “justice,” maybe I was the monster.

That was the only mention of wrongdoing in a 70-minute conversation that ranged from reasonable critiques of online harassment to doomsday predictions of its impact on American society. “If we’re calling this ‘cancel culture’ what it is, it’s bullying, and it’s bullying without consequence,” Willoughby said. “I think what we have is a problem with empathy and compassion and how to properly express discomfort.” Not only is this dehumanizing, she argued, as a result “we have war and we have murder and we have horrible genocide and atrocities.”

At the discussion’s conclusion, the moderator praised the speakers for being “very brave and helpful in bringing these things to light.”

But how much of this really needed to be brought to light? The harmful effects of social media harassment are well documented. Condemning death threats isn’t controversial—it’s obvious. Halperin was using the excesses of “cancel culture” as a convenient punching bag, a way to reclaim the moral high ground. It was a genius bit of spin: If I disagreed with his call for “compassion” and “justice,” maybe I was the monster. By lumping death threats and online harassment together with legitimate accountability for sexual misconduct, the panel came off less as a courageous call  for tolerance than a cynical attempt to reframe perpetrator as victim.

When I asked Halperin to differentiate between appropriate and inappropriate ways that he had been held accountable for his behavior, he didn’t give a direct answer. Instead he said victims deserve “top priority” but complained again that there isn’t a mechanism for reintegrating canceled people. “Murderers in our society who get out of prison are afforded an opportunity to go on with some aspect of their life,” he said. “The challenge to a lot of people who are canceled is there’s no mechanism for that, regardless of what they’ve done, regardless of whether they’ve tried to make amends.” The MeToo movement rewrote the rules of the game Halperin had been playing all his life. Now he wants the new rules to be rewritten to let him back in.

“The environment is so toxic right now,” Christensen added. “We’re in a situation right now where we’re not having those conversations, it’s not possible.” After the event, I asked her whether it gave her pause to discuss her experience alongside Halperin despite the difference in magnitude between the actions they were called out for. “I’m not here to judge,” she told me.

Nearby, Halperin stood with his back to a wall, talking to some PR people. “I can write press releases, I can write speeches, I can write just about anything,” he told them, eyebrows raised. “And I can do it fast.”

The moderator laughed awkwardly. “We’ll have to see,” she said.

This article has been updated to more accurately describe Jennie Willoughby’s speaking career.