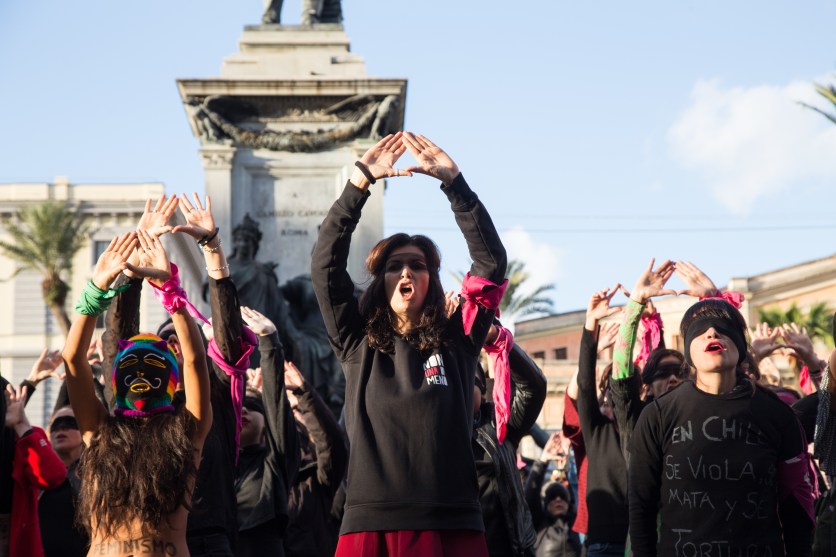 Protesters stand together against sexual assault and torture.Matteo Nardone/Pacific Press/LightRocket via Getty

Last week, thousands of women gathered at a former torture center in Chile, standing shoulder to shoulder to sing a new feminist anthem that has spread from demonstrations in Chile to similar ones throughout Latin America and now Europe.

“The rapist is you,” the women sang. “It’s the cops, the judges, the state, the president.”

A feminist theater group in the Chilean city of Valparaiso wrote “A Rapist in Your Path,” which took off in late November as the nation erupted in protests against social inequity and the country’s right-wing billionaire president. Videos of the song and its choreographed dance moves have grown worldwide and been adopted by other protesters.

“It was never intended to be a protest song. The women of the marches transformed it into something more,” Paula Cometa, a member of the theater group, told the Guardian. Cometa said the choreography reflects life in a nation where security forces have faced widespread allegations of rape and torture.

Chileans have expressed gratitude over the way the song challenges the shaming of assault victims and how it’s brought so many women together worldwide. “I cried the first time I heard [it],” said Victoria Gallardo, 71, one of the protesters at the former torture center. “I’m so proud of the young women of today—and this performance represents us all.”

Expert witnesses. Five-year-old Michael had to go to court in Grand Rapids, Michigan, last week for his adoption hearing. He and his new parents invited his whole kindergarten class, some of whom served as expert witnesses when the judge asked about him. “Michael’s my best friend,” said one. “I love him,” said another. Each carried paper hearts on sticks, which they waved in support of their classmate. At the end of the ceremony, the judge carried one, too. (CNN)

For mom. Daphne Caruana Galizia’s three sons vowed to unearth those behind their mother’s 2017 murder. A reckoning is happening, as the highest officials in their country have been engulfed in the investigation of the assassination of Malta’s top investigative journalist. On December 1, following street demonstrations, Prime Minister Joseph Muscat announced he would quit after the government’s mishandling of the case. A prominent business leader has been arrested in the contract killing of Caruana Galizia, who had been investigating high-level corruption. A political ally to the prime minister also has quit. (Washington Post)

A teachable moment. In the United States, people have challenged the justification for monuments to Confederate leaders. In New Zealand, a Maori resident took a claw hammer and a can of paint to a public statue of a man behind a land-grab campaign that killed 2,000 of New Zealand’s native warriors. New Zealand’s prime minister, Jacinda Ardern, reacted to that attack by calling for the nation to come together. She educated New Zealand about the ugly and often hidden history exposed by that attack, and she changed public school curricula to require teaching about wars against people who lived in the land before white settlers. A local newspaper also began recounting the long-ignored history, an effort that proved popular with readers. The public’s reaction, Prime Minister Ardern said, has been “incredible and far-reaching.” (New York Times)

Recharge salutes: 17-year-old Feroza Aziz, who created a viral “cosmetics” video on the Chinese-owned TikTok service. Under the surface, the video really reported on Beijing’s roundup of up to 1 million minority Muslims into incarceration camps. When TikTok, which has squelched reporting about authoritarian China’s horrors before, suspended her account, the story got even bigger. (TikTok later apologized, reinstating the account and restoring the video). Aziz, a New Jersey high schooler, acknowledged she had begun the political story with talk about eyeliner in hopes the video would get past Chinese censors—and interest young people. “A lot of people want bigger lashes,” she told Rolling Stone. “Let me reel them in.”

After those stirring stories, let’s take a breath: I’ll leave you with these clouds floating over Two Medicine Lake at Montana’s Glacier National Park, via the Interior Department’s Twitter feed. Okay, exhale—and have a great week ahead.