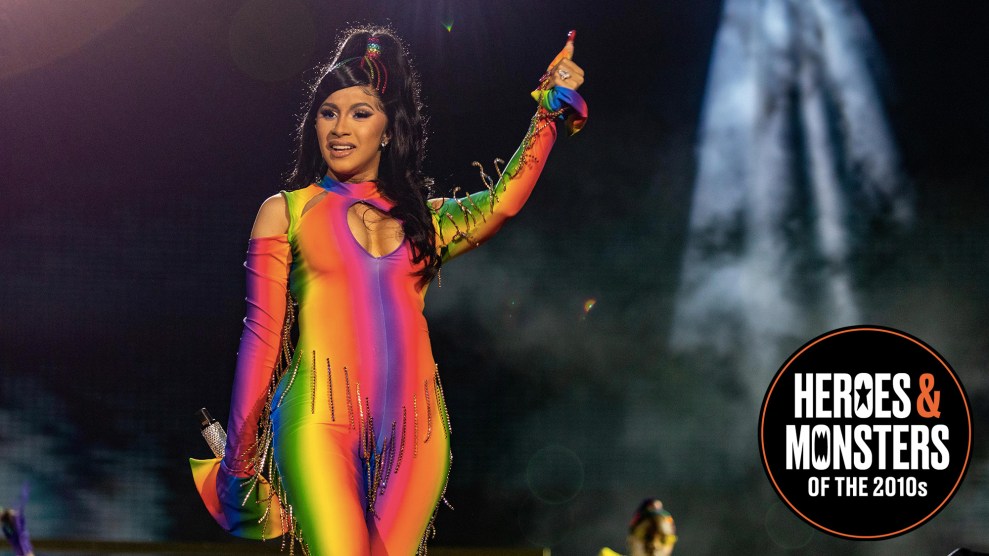 Since its premiere in 2011, VH1’s Love & Hip Hop has been a graveyard of sorts. Two types of artists go on the show: those on the final leg of a once successful career, looking to squeeze out some coin before their careers are laid to rest; and those whose careers were never really alive to begin with.

Cast members were always at some “release party” for music that no one was ever really checking for because we weren’t in it for the music. We were in it for the mess. For the love triangles. The petty fights. For the memes and the mayhem. Hip hop itself was never the reason to watch.

Or at least it wasn’t until a regular-degular-schmegular girl from the Bronx hopped in front of the cameras and turned a cemetery into a launching pad. She had a crooked smile, a Dominican accent by way of the South Bronx, jet-black bangs that almost reached her eyelashes, and a personality so over-the-top hilarious you couldn’t look away. Whether you liked her or not, you felt something when you watched her. And on a show stacked with clout chasers doing way too much for way too little, she stood out and made a name for herself: Belcalis Almánzar, the Trinidadian–Dominican stripper turned social media personality, turned reality TV star, turned cultural phenomenon, known simply as Cardi B.

If you’ve forgotten that Cardi B was on Love & Hip Hop for a couple seasons, or if you never knew in the first place but somehow know who she is now, it’s probably because in the last three years she’s accomplished what many rappers couldn’t manage in the entire decade. But Cardi B isn’t one of my 2010s heroes because of all her accolades. Nor is it about her having been the first woman rapper with multiple No. 1 hits or the first woman rapper to grace the cover of US Vogue (really, Vogue?). That stuff isn’t what makes Cardi B special.

Cardi B is one of my heroes of the decade because she was never supposed to be on anyone’s heroes-of-the-decade list. The world doesn’t value women like Cardi B, doesn’t see women like Cardi B, let alone reward and celebrate them. Maybe a few have been allowed through the gates in the past, but when they were, it was always on the terms established by the male gatekeepers. Before Cardi B, a woman in hip hop might be permitted to act like a stripper, but no one wanted her to actually have been one. Eve got away with it, but to do so she had to frame her stripping as some regrettable mistake born of youthful naïveté and recklessness. Cardi did the opposite. She ran toward the stripper label, not from it. She not only owned having been a stripper but she also owned having liked it, sending a very clear “fuck you and your respectability politics” to anyone who tempted to disapprove.

Her approach to people’s fascination with her life in the club wasn’t blasé. She spoke openly about how stripping gave her the financial independence she needed to leave an abusive boyfriend, turning often invasive and sexist interviews into teachable moments that helped chip away at cultural stigmas. Cardi’s infiltration of the US mainstream has helped inch hip hop and the culture at large toward a less misogynistic consensus on sex work and the women, specifically the women of color, who do it.

Cardi isn’t without her own contradictions. In her interview with Vogue earlier this month, she made sure to emphasize that she has never been paid for sex:

I just hate when people be like, oh, you used to be a stripper, so you’re a prostitute, you used to fuck guys. I never used to fuck guys. The thing about it is, when you’re known as a stripper that fucks guys for money, everybody hates you because you’re fucking up the game. You’re making guys expect more than what you should be giving, and the next bitch pays for it. I don’t have to give guys no ass. You want something from me? I want something from you. I want your money, you want my time. So I’m just gonna give you time. Once you start expecting more, my phone number’s disconnected. Bye.

Over the years she has taken pains to establish this point—on social media, in interviews, in lawsuits, and her lyrics. I can understand why Cardi continues to shut down any implication that she might’ve been paid for sex. Breaking into the mainstream was hard enough for a woman of color from the hood who was also a stripper. I can also understand wanting to bury a rumor that was never actually true, especially as a young mother navigating a repressive culture that deems sex workers deviant pariahs undeserving of basic necessities like safety and respect. But this is gatekeeper talk, ultimately. In her insistence on drawing a distinction between good sex work and bad sex work, she doesn’t reject the stigmas surrounding sex work so much as offload them onto other workers.

I have hope that in the 2020s Cardi won’t feel the need to undermine women who do get paid for sex in order to make her past seem more palatable to the masses. Even in that recent Vogue interview you can see her edging toward a different point—one more about solidarity and scabbing, about sex work as work. Cardi has a proven ability to both recognize and reimagine the toxic narratives our culture thrusts onto those of us from the hood—narratives that tell us to hate everything about being from the hood, to hate even the few paths that can lead us to safety, joy, autonomy, and something better while the outside world offers us so little.

“Women always want to talk about feminism and supporting everybody,” Cardi said in that same Vogue interview, “except if it doesn’t fit your category of what to support. Certain women that claim they are feminists only think that a certain type of woman should represent that.”

That was more like it. Fuck you and your respectability politics. May she spend the next decade fully living up to that credo.