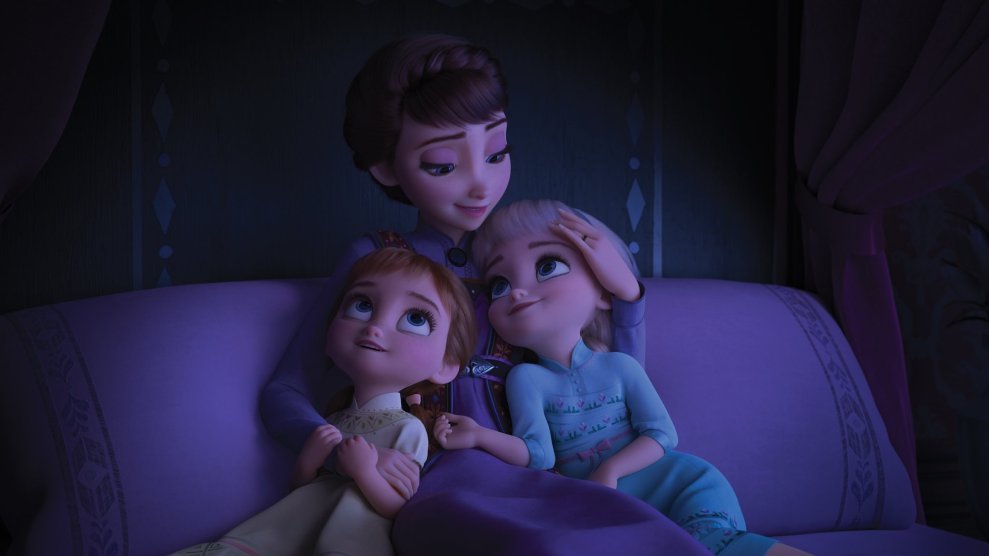 Anna and Elsa with their mom.Disney

Since Frozen II was released a few days before Thanksgiving, the snowy family franchise has raked in more than a billion dollars globally—and inspired hordes of 3-to-8-year-olds to put on glittery blue gowns and go to the theater to watch their beloved ice queen Elsa.

Frozen II breaks many gender stereotypes. The story is centered around Elsa and Anna, sisters who embark on an adventure to find the truth about their pasts and fix humanity’s relationship with nature. Elsa doesn’t have a boyfriend, leading to Internet speculation that she might be Disney’s first queer queen, and for most of the movie, Anna’s boyfriend, Kristoff, doesn’t do much besides patiently wait for her to return. He’s a gentle, kind, and supportive commoner, a far cry from the typical Disney prince and his chesty gender normativity. Frozen taught us that princesses can save each other; the sequel takes that idea a step further, the two sisters joining hands to save the world, while the men serve their vision.

But the feminist overtones of contemporary Disney princess flicks like Frozen II don’t quite make up for the corporation’s century-long track record of portraying its women as Cinderella types waiting to be rescued by their various Prince Charmings. Nor do they atone for the female leads of the ’90s “Disney Renaissance” (think Belle, Ariel, even Mulan) who flipped the damsel-in-distress narrative on its head but still somehow managed to speak less than a third of the dialogue, and who of course wound up marrying the boring shmucks they rescued.

We have a love-hate relationship with the Princess Cinematic Universe. Love the nostalgia; love the songs; hate the capitalistic-paternalistic entrapment of young girls learning to emulate stick-thin 16-year-olds who strive toward dreams of wedded bliss. What follows is our effort to navigate these crosscurrents: a ranking of the princesses of the PCU, by the lights of two gender reporters (one of whom is the mom of an Aurora-obsessed 3-year-old).

Did you even know her name, or did you just know her as “Sleeping Beauty”? We could rant here about how Aurora had one job— not to prick her finger on a spindle on her 16th birthday. Or about how her main dramatic function is to fall A) in love and B) asleep. But we’d instead like to draw attention to the non-consensual nature of the kiss that wakes her from her enchanted slumber.

Also a sleeper. After fleeing her wicked stepmother, she avoids a life on the streets by keeping house for seven men, cheerfully winning their affection because she’s so good at chores. Her defining characteristic is her status as the “fairest in the land”—literally the whitest of them all. Like Aurora, she’s saved by being sexually assaulted by a prince, who falls in love with her when he thinks she is dead.

Cinderella makes so few choices that there’s honestly not much to evaluate. She does nothing to fight for herself under the oppressive rule of her stepfamily, leaving the resistance to her fairy godmother, who conjures her some nice heels and a souped-up ride. That said, she survives abuse and neglect, cultivates a support network of animal friends, and doesn’t lose her ability to dream. So, points for that.

Ariel is at first a rebellious teen, nurturing an interest in another (human) culture while defying her controlling dad, the mermaid-isolationist King Triton. She busts some surprisingly badass moves when she saves Prince Eric from his sinking ship. But this strong start all comes tumbling down when Ariel literally chooses to give up her voice and her mermaid identity in exchange for a waist-down makeover, believing legs will win her the man. There’s no coming back from that.

Among the many racist depictions of Arab culture in Aladdin, Jasmine is yet another stereotype: an oppressed woman longing to escape a controlling, male-dominated society. Unlike so many of her princess predecessors, she says no—no to wedding a prince under her father’s pressure, no to staying put in the palace, no to Aladdin’s Prince Ali Ababwa act. But the most that Jasmine ever dreams of is marrying for love. Ultimately she, too, requires saving.

According to the movie, she’s a peacemaker and a masterful negotiator. She saves the tribes and colonizers from the brink of bloodshed. She embodies courage and compassion (and Barbie-doll beauty standards). But of course the story of the actual Pocahontas is much more complicated and discomfiting. Historians say that Pocahontas was not her real name, that she was only around 10 or 11 years old when she met Englishman John Smith, that she would go on to marry a much older man at 17 and then get hauled off to another country while her culture was destroyed and her people were killed. The amount of bleach needed to sanitize the colonial, pre-genocidal history of North America could fill up Epcot many times over.

She reads. She’s a working-class girl who works hard and speaks her mind. She exercises her choice to say no to Gaston, an obnoxiously masculine hunk in her village who wants to marry her. She takes destiny into her own hands by trying to save her father. She chooses to marry the Beast, thus choosing inner beauty over looks. Even though Belle is a near-perfect heroine, the movie disappoints—it doesn’t seem to realize it’s actually a story about Stockholm syndrome. Don’t be so distracted by Gaston’s boorishness that you miss that the Beast is a tortured, self-loathing abuser and kidnapper. And we’re not thrilled that girls are often taught to fall in love with men for who they are and not how they look, while men in Disney movies (and beyond) so often fall in love with women because of their beauty.

We love that the true love that triumphs in the end is the love between the sisters. In this movie, they save each other, take on the bad villain boy and the patriarchy in general. In Frozen II, we finally get to see a supportive boyfriend, Kristoff, who patiently waits for Anna’s return. He does ride to the rescue at one point, but the first thing he asks afterward is how he can help—model allyship. But Frozen is still set in a society in which women are expected to curb their power. Instead of celebrating Elsa’s magic, her parents work toward suppressing it, and the movie seems to share some of their mixed feelings. Elsa’s coming-of-age anthem “Let It Go” may resonate with 5-year-olds everywhere who likewise long not to be the good girl they’re told to be, but the underlying message is that the price of breaking free and giving full rein to your abilities is isolation.

Tiana dreams of opening a restaurant. When she applies for a loan and deals with financiers, we see her grit, her determination, her independence. She kisses the prince-turned-frog Naveen only because he promises her to open a restaurant. Over and over again throughout the movie, she saves the frog prince. She’s a strong role model, a working-class girl with big dreams who’d have made it with or without the prince. The movie has faced criticism from Black filmgoers over Naveen’s relatively fair skin and also over Tiana, the rare Black Disney princess, spending most of her time on screen as a frog. The impression given of Naveen is that he’s an entitled and perhaps incompetent prince who does something stupid and can’t get out of the fix he’s in without Tiana’s help. In the end, we’re left with the feeling that she’s the smart one and the prince is lucky to have her.

Mulan, a far-from-graceful tomboy who flubs her meeting with the town matchmaker, reveals introspective depths early in her story, gazing into a lily pond and singing, “Why is my reflection someone that I don’t know?” Patriarchy, Mulan. That’s why. Fortunately, all the gazing ends shortly thereafter when Mulan, disguised as a man, goes to war in place of her father. Motivated not by love but by family, she transforms herself into the baddest soldier of them all—saving the men, saving China, and introducing her sexist comrades to the joys of cross-dressing. She—ugh—gets the guy. And who could forget that ingenious cannon shot?

We like that she’s a princess who gets her hands dirty. She’s playful, smart, and opinionated. She loves her dad but isn’t afraid to disagree with him. She’s not dainty or snobbish. She breaks all the stereotypes of being a princess by actually doing the work of bringing people together. She takes risks. She follows her heart and has the physical stamina to do what it takes. She doesn’t rely on Maui’s help and ultimately figures it all out on her own. No romantic interest, for ONCE.