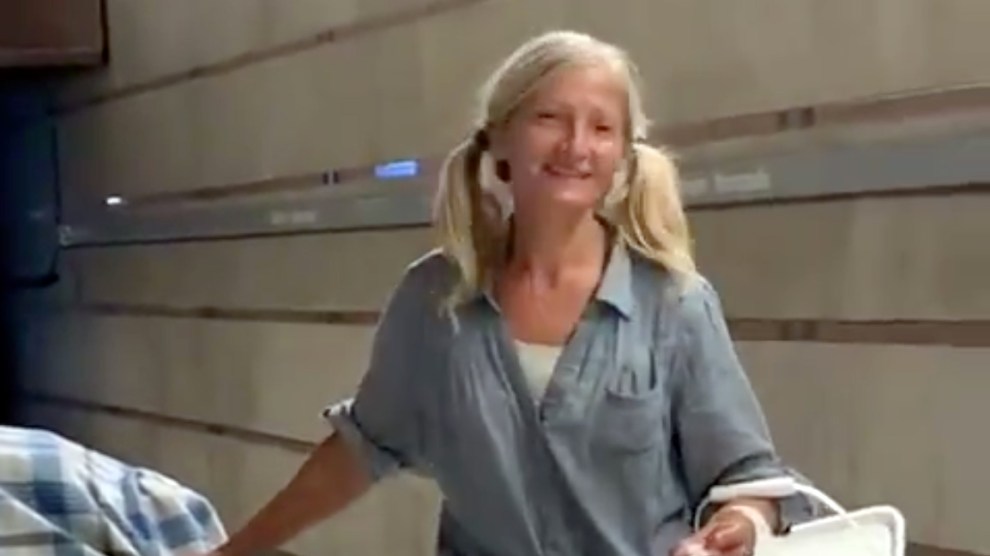 Screenshot of video from LAPDHQ/Twitter

Emily Zamourka says she learned to sing by imitating opera performers on TV while growing up in Russia. Decades later, with her belongings beside her, she began singing at a Los Angeles subway stop—and a police officer’s video of the scene got more than 1 million views.

The video also prompted a crowdfunding effort for the 52-year-old; efforts to find housing for her; and a paid gig on Saturday, singing the same Puccini aria at a Little Italy celebration.

Zamourka told the Los Angeles Times that she had battled through a series of health issues to teach piano and violin lessons, and had played violin on the street for extra cash—until a stranger took and broke her violin in downtown LA. After that, she rode the subways at night with her belongings.

Now, more than 2,100 strangers have contributed $77,000-plus to supplement the $400 a month in government aid she had lived on. A Grammy-nominated producer wants to give her a recording contract. One of several LA Times readers wrote in response to the stories: “She has already inspired many to cheer her on and to applaud her efforts to survive, ultimately to thrive and finally to triumph and share her gift.”

Zamourka is grateful and a little overwhelmed, and she has this advice for encountering people who are homeless, whether or not they have creative talent: “Don’t wait until…you discover something. Be there for them. Help them out…Everyone deserves a chance.”

Making the library public. Until this month, 343,208 users of the Chicago Public Library—including one in five patrons under 14—could not borrow books because they had run up more than $10 in late fees. Now, the library has forgiven them—and declared the end of late fees. “We are taking a step in the right direction to help our library system once again serve as a gathering place for the entire community, regardless of your financial status,” Mayor Lori Lightfoot said. Chicago is the biggest city so far to eliminate fees, but cities such as Phoenix, Miami, Dallas, San Francisco and Washington, DC, have already done so. Has your community? Should it? Let us know at recharge@motherjones.com. (Chicago Sun-Times)

Creative conservation. A Tuscan fisher has come up with a way, he hopes, that illegal bottom trawling won’t scoop up all the fish off the coast from his village. Paolo Fanciulli has placed 24 Carrara marble statues at the bottom of the sea to protect fish from the bottom trawlers. He has 18 more statues—carved from marble from Michelangelo’s preferred quarry—ready to dunk. Fanciulli, preaching his sustainable fishing mantra to tourists and fellow fishers, calls the underwater sculptures “the biggest museum in the world to save the sea.” (New York Times)

Grassroots victory. GEO Group is the biggest player in the private prison and immigrant detention “industry.” Now none of GEO’s banking partners want anything to do with it. Eight major lenders said they’re ending their exposure in this business. Protesters have called it unconscionable to profit off prisoners (indeed, the first private US prison opened only in 1984). Several Democratic presidential candidates have called for an end to for-profit prisons. (Forbes)

Recharge salutes: Retired teacher Lisel Heise, who at 100 won her first bid for electoral office, running on a platform to help Germany’s younger generations; Texas high school cheerleader Tyra Winters, who jumped off a parade float to save the life of a choking toddler; and runner Braima Suncar Dabo of Guinea-Bissau, who helped a struggling fellow 5,000-meter racer, Jonathan Busby of Aruba, cross the finish line at the sweltering world track-and-field championships in Qatar. “My thoughts were to help him finish. That is the point of the race,” Dabo said Friday.

I’ll leave you with this fiery sunset over the Blue Ridge Parkway in North Carolina, via the Interior Department’s Twitter feed. Thanks so much for being part of this week’s Recharge, and have a great week ahead!