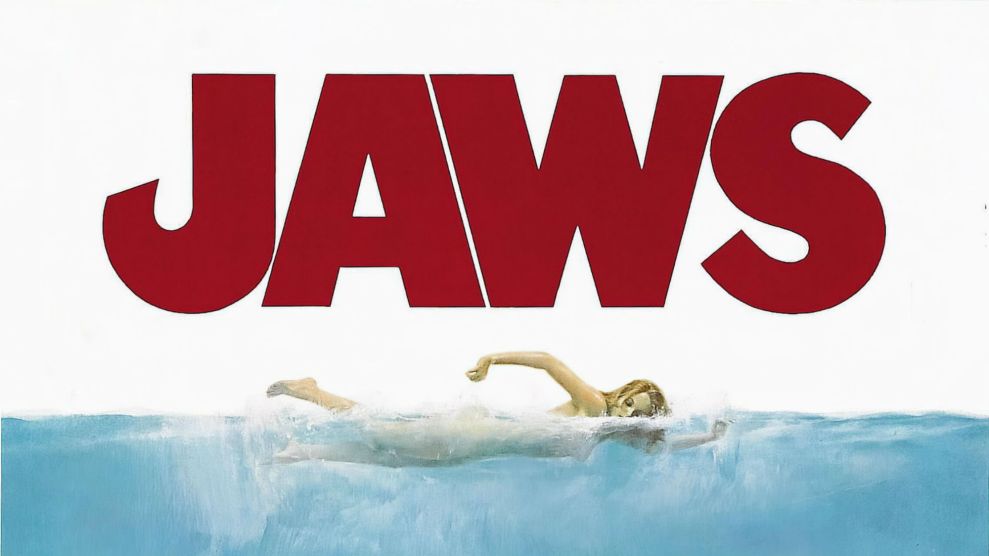 When Steven Spielberg’s Jaws premiered on this date 44 years ago, on June 20, 1975, it was a booming success: In the first weekend, it grossed $7 million—adjusted for inflation, that’s a whopping $33 million. The film would go on to inspire a wealth of pop culture moments: a Saturday Night Live skit dubbed “Landshark,” references on The Simpsons and Family Guy, a Universal Studios theme park ride, three sequels, and even a board game. (It also shaped the life of Mother Jones‘ own Ben Dreyfuss, though he thinks the movie is “ridiculous.”)

Jaws is about a 25-foot shark that terrorizes the beachgoers of Amity Island, aka Martha’s Vineyard, off the coast of Massachusetts (though you should know this; if you haven’t seen it, please show yourself out). It’s a frightening film, ranked sixth in IMDb’s definitely very official list of the 10 best horror movies of all time, coming in just after The Exorcist.

It arguably led to more than mass fear. In the years after Jaws was released, thousands of people took to the ocean to kill sharks for sport, researchers say. “Shortly after the movie appeared, shark fishing as sport became popular, and in the next decade hundreds of shark fishing clubs and tournaments appeared along the U.S. east coast,” National Oceanic and Atmospheric Administration fisheries biologist José Castro wrote in 2013. As a result, the number of large sharks fell by an estimated 50 percent along the eastern seaboard of North America in the years following the film’s debut, George Burgess, then the director of the Florida Program for Shark Research at the Florida Museum of Natural History, told BBC in 2015.

Peter Benchley, who wrote the 1974 best-selling novel that inspired the film, was shocked by the public’s violent response to the movie and devoted the later years of his life to advocating for shark research and conservation. “When I sat down more than 30 years ago to write Jaws,” Benchley wrote in the introduction of the book Saving White Sharks in October 2004, less than two years before his death, “I had a lot of freedom as a storyteller. At the time, virtually nothing was known about the lives of white sharks—or most other sharks for that matter. In the absence of scientific knowledge, I was free to tell a tale in which white sharks attack boats (which we now know they don’t do) and attack and eat people (which we’ve since learned they don’t really like to do).”

Still, by any standard, Jaws is an American classic. What’s less clear was the formula to its success—not to mention what exactly made it so terrifying. On this anniversary, Mother Jones spoke with actor and screenwriter Carl Gottlieb, who co-wrote the screenplay of Jaws with Benchley—and has been asked about the film so much, he now refers to it just as “the fish movie.” He spoke about the film’s legacy, how Shark Week is like religion, and why he’s happy that Spielberg didn’t take all his script notes.

Mother Jones: A lot of movies can’t stand the test of time like Jaws has. From your perspective, why is that? What made the movie so iconic?

Carl Gottlieb: It’s inexplicable. I am in New York at the moment. And you know why I’m here?

CG: They’re doing a Broadway musical based on my book, The Jaws Log [about the making of Jaws]. I just heard it run through the songs and the lyrics. There’s a character named Carl Gottlieb who was speaking about doing a re-write. I mean, it’s nuts. It’s disconcerting, actually, just to see it like that. But nobody can tell why the fish movie was such an iconic film. It’s just a combination of ingredients that can’t be duplicated. People have tried. It’s lightning in a bottle, I suppose.

MJ: When you were writing the screenplay for Jaws, did you have any expectations for what the impact would be beyond the movie theater?

“If we do our jobs right, people will feel about going in the ocean the way they felt like taking a shower after Psycho.”

The wrong statement I made—I was criticizing the script. I didn’t realize what an amazing director Spielberg was. I said, “Look, you know, do we have to have the little teenage naked girl get eaten by a shark for having sex, or for even thinking of having sex?” Because that’s such a cliché; even then it was a cliché. I was wrong. Chrissie’s death in the opening minutes of the movie is one of the most harrowing deaths in horror movies, and you never see the shark. That was my dopey comment.

My prescient comment was, “If we do our jobs right, people will feel about going in the ocean the way they felt like taking a shower after Psycho.” And sure enough, for the next 45 years, anytime I’m introduced to somebody as the co-writer, being involved with the fish movie, the first comment is, “After I saw that, I didn’t go in the water. I didn’t go swimming. I didn’t go in the lake. I didn’t go the stream. I didn’t take a bath.” It resonated so strongly.

MJ: A spokesperson from Discovery Channel told me Jaws was part of the inspiration for Shark Week. What are your thoughts on Shark Week?

CG: I’ve been in show business most of my life. And there are things that come along, whether it’s Milton Berle in the early days of black-and-white television or the Sopranos when HBO did their first major series, that trigger a collective unconscious. There’s something about shared legends—a cynic or an atheist would point to Jesus or Muhammad as beneficiaries of this phenomenon. I’m not equating Jaws with religion, but we have these triggers that we’re not even aware of, and in the right hands, they can be used for good, vis-à-vis religion and ethical systems, or it can trigger Jim Crow and prejudice and lynchings and persecution of the Jews and all kinds of horrible things that are done with a collective cooperation by a bunch of people who are struck simultaneously by the same notion.

MJ: You’re saying Jaws tapped into that as a shared legend, that basically anyone, with any language, can understand and connect with?

CG: Yeah. Nobody wants to be bitten. And the ocean is not the natural habitat of man. So you put those two things together, and then give it a face and some teeth and a fin and everyone goes, “Right, that’s the thing I’m scared of.”

MJ: But there’s also been some misinformation out there about sharks, right?

CG: Well, the misinformation is mostly characterizing sharks as some sort of monsters, some sort of malevolent force. Even in Jaws, the oceanographer [falsely] tries to explain, they’re just an eating machine, that’s all they do, that’s what they’re programmed to do. And the notion that sharks have it in for human beings, or even have a taste for human beings, is cuckoo.

MJ: How do you think Peter Benchley would feel about the state of shark research and conservation today?

CG: Peter spent the last decades of his life trying to make amends for what happened as a result [of his novel and the movie]. What he wrote was a summer potboiler novel. He was just trying to write a bit of pop fiction and make some money. And then, during the height of it, when people were shooting sharks and going on shark-killing expeditions, he was appalled. He did everything he could to reverse the trend and kind of guide [public opinion] along lines that were more beneficial and not irrationally fearful of what is just a part of nature.

You have to be afraid of avalanches and earthquakes and tornadoes and lions and tigers and bears—oh my. But at the same time, there’s good science behind all those phenomena. Our job as enlightened human beings is to be aware of what the phenomenon is, and try not to personalize it as something that we have to fear. In that regard, Peter’s heart was very much in the right place.

Yes, certain kinds of sharks could hurt you. But it’s not personal. And they’re just being sharks. We have to understand that that’s what they do. And it’s their ocean, not ours. So lighten up on the shark.