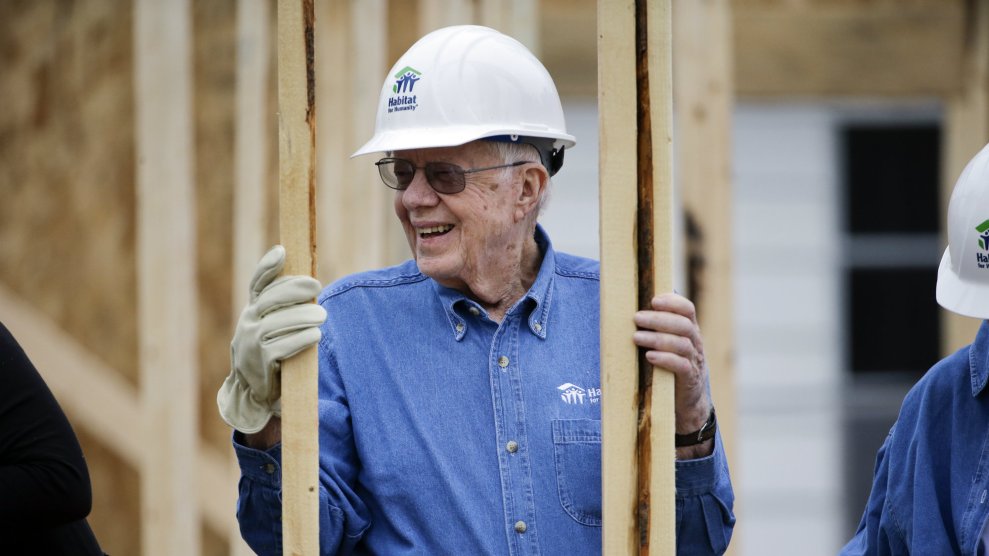 He has never sought great riches, or to capitalize on the presidency for personal gain. He lives in a home that is assessed for a lesser value than the armored Secret Service vehicle that sits outside it.

Last week, at 94, Jimmy Carter became America’s oldest living former president, prompting praise for the human rights champion and Navy veteran. When in power, he looked ahead, installing solar panels in the White House and promoting a slew of judges of color and women to the federal bench, including Ruth Bader Ginsburg. Out of power, he oversaw election monitoring in many tight votes worldwide and has spent decades volunteering to build homes with Habitat for Humanity.

“We…are grateful for his long life of service that has benefitted millions of the world’s poorest people,” said the Carter Center, an Atlanta-based nonprofit focused on public policy.

As a public servant and after the presidency, Carter embodied the traits we feature each week in this newsletter. He thought of others and refused to take credit for the daring rescue of six US diplomats in Iran (an episode later made famous by the movie Argo). The reason? Carter didn’t want to endanger the lives of other US diplomats held hostage there.

Carter took the hard road internationally, seeking to burnish America’s standing by refusing to coddle strongmen, such as Chile’s authoritarian leader, Gen. Augusto Pinochet. As a young reporter in neighboring Argentina, I witnessed testimony from Carter’s human rights chief, Patricia Derian, on how she directly confronted a leader of that military government on torture. (Busted, Argentina’s naval chief rubbed his hands and replied: “You remember the story of Pontius Pilate, don’t you?”)

Although reviews of Carter’s presidency have been mixed, political scientist Robert A. Strong writes that “some consider him to be the nation’s greatest former President,” and that his work is admired by people on both sides of the aisle.

In a Washington Post interview last fall, the former president said it was difficult to abide President Donald Trump’s constant lies, and he called the current presidency a “disaster.” Carter recalled that he would have been expelled from the Naval Academy for a lie, and hinted that his father, who whipped him six different times with a peach tree branch, would not have tolerated mistruths, either.

“I always told the truth,” he said simply.

From this columnist to President Carter: Live long and well.