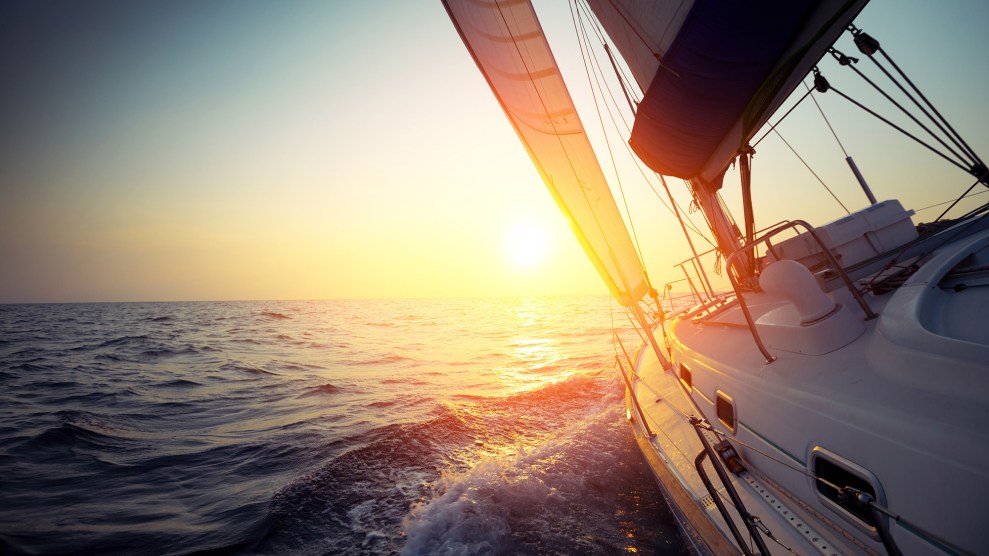 They met on a boat. A huge, liveaboard trimaran in the British Virgin Islands, to be exact. She was there as a magazine writer, reporting a story about a cycling and diving vacation. He was a diving instructor. “The very things that attracted me to Bill for a shipboard romance,” she remembers, “were what seemed to make him unsuitable as a permanent mate. China-blue eyes, sun-blond hair, an allover tan, and a nomadic lifestyle?”

She was going on 50 and divorced. He was in his 30s and had “run away from home” in Akron, Ohio, as he put it, escaping an office job and a predictable trajectory.

Yes, echoes of a pulp romance, or maybe a Sandra Bullock vehicle. But it turned out to be more than a vacation fling. For nearly a year, Judy Wade and Bill Baker exchanged letters and recorded cassette tapes to mail to each other. (There was no phone on the boat.) Eventually he came to visit her in Southern California: “I remember a friend of mine saying, ‘What kind of guy would leave a boat full of women running hot and cold and come suck exhaust fumes in Sherman Oaks?’” Judy recalls. He stayed for good.

Today Bill and Judy live in Phoenix. He still dives from time to time, and she still writes, and they are both involved in politics at the most retail level, as part of their party precinct committee. They are Democrats now (though Judy was a Republican most of her life) and resistance-minded, but in January they hosted a party for their Democratic state senator and only invited Republicans and independents. About 50 came. “We had a great time,” Judy says. “One of them told me, ‘You know, I was a little disappointed.’ I said, ‘Why, Barb?’ She said, ‘You didn’t do any Trump bashing!’”

But there’s a way to square that circle: Recently, a few MoJo donors handed us a challenge. They will make a dona­tion of up to $10,000 to Mother Jones in honor of anyone who includes a gift to the organization in a will or estate plan—equal to 10 percent of the estimated value of the bequest.

I love this idea because it means “now” and “later” are no longer mutually exclusive. If you or someone you know would like to learn more, visit motherjones.com/bequest.

I called Bill and Judy because they recently reached out to let us know they had included Mother Jones in their will. We often check in with people who tell us about these bequests because we’re curious how they came to the decision. Many are longtime readers, people who have worked all their lives and saved a bit and see this as their opportunity to make a lasting difference.

Lately, we’ve also heard something else: These supporters are still thinking about the long term, but they feel very urgent about the short term. They want to put investigative boots on the ground right now. And “right now” is definitely not what you should be thinking about when you’re making your will.

As former journalists, we know Mother Jones does an exceptional job focusing on what we need to know and what we can do to remedy unjust situations. For this reason, Mother Jones is part of our trust, so we can help it continue this unflagging pursuit of what is right and fair.

Judy Wade and Bill Baker
Phoenix | Legacy Society Members
Learn more about how you can join the Bequest Challenge.
I’ve spent my whole life working for underserved and vulnerable communities. When I thought about where I could have the largest impact and ripple effect for my money, I immediately thought of Mother Jones. I hope with my gift they are able to thrive for decades to come.

Kathye Gorosh
Chicago | Legacy Society Member
Learn more about how you can join the Bequest Challenge.

Back to Bill and Judy, though—because like every story you look at closely, theirs took some interesting turns. Judy grew up as a conservative, the daughter of a teacher and a granite salesman in St. Cloud, Minnesota. She went to the University of Minnesota and worked for the student newspaper. (We laughed at this, because 30 years after she graduated, I sat in that same basement newsroom and helped assemble that same scrappy daily.)

It wasn’t until the tail end of the Reagan era that Judy began to drift away from the GOP. “I felt that my party had left me. I didn’t like the direction they were taking on humanitarian issues and environmental issues.”

Bill had not been a news or politics junkie. But at some point, he recalls, Judy “made me sit down and read a few issues [of Mother Jones], and I was hooked.”

“It’s so easy to jump online and get sound bites,” he says. “But when you really get a deep look at an issue that you’re interested in and see the work that the reporter did, the time and effort that goes into it, that’s so different.” Judy jumped in (they finish each other’s sentences): “You have to be educated on both sides of an issue. You have to see both points of view. And Mother Jones is a giant resource for us that way. The articles are so well researched, and we trust them.”

This was something I would keep hearing as I called up other MoJo supporters. They use what they read.

Every day, the need for reliable information becomes more and more precious. For decades, we’ve relied on Mother Jones to report the truth, unbeholden to corporate filters. By joining the Legacy Society, we hope to ensure Mother Jones continues for decades to come!

Midge and Steve Carstensen
Redmond, Washington | Legacy Society Members
Learn more about how you can join the Bequest Challenge.
For a healthy democracy, we need reporting that challenges our assumptions, digs up the truth, and uncovers connections the rest of the media can’t or won’t uncover. Mother Jones meets this challenge. I joined the Legacy Society to support this critical work not only today, but long into the future.

“It’s really important to tell people accurately what’s going on,” Craig Fehrenbacher, a piano tuner who lives in rural Illinois, told me. “Mother Jones—they’re not in your face. They’re just finding out what’s going on and putting it out there. The way the country is now, everybody is just divided. We need more people that are open to things.”

In 2012, Craig was diagnosed with lymphoma and, amid tough and scary treatments, decided to put together a will to make sure the money he’d saved for retirement went to causes he cared about. But he’s feeling pretty strong these days. “Maybe I’ll get healthy and get to spend some of it,” he told me, and I found myself hoping we’d never see that money.

Craig still lives in the conservative town where he grew up. He was always a curious, skeptical sort: “I was just a little kid in catechism education, and I would memorize these lists of sins, and it was like, ‘I’ll go along with this, but I have some questions.’” Over the years, that curiosity made for some tension in a deeply religious family, but it served him well while he traveled the world as a high-end piano technician for the likes of Elton John, Lyle Lovett, and classical pianist Olga Kern. (Classical artists are fun to work with, Craig notes, “because they want to meet the piano technician. It’s not like you’re dealing with the assistant.”)

As a journalist, you often have no idea how the stories you work on resonate after you put them out there. But talking to folks like Craig, Judy, and Bill has filled in some of those blanks for me. I can picture the faces and voices behind the reader support that is MoJo’s lifeblood. (It makes up two-thirds of our budget.) And I am always humbled by how generous these readers are and how they put MoJo’s journalism to work.

Judy told me that in recent months, she and Bill have taken workshops about “how to talk to someone who doesn’t think like you.”

“The most important thing is to ask questions,” she told me. “How did you come to feel this way? Where did you learn that information? When they are all talked out, you can offer them a little bit of something new. And when they say, ‘How did you find that out?’ I say, ‘The last issue of Mother Jones. Here you go—I’ll loan you mine.’”