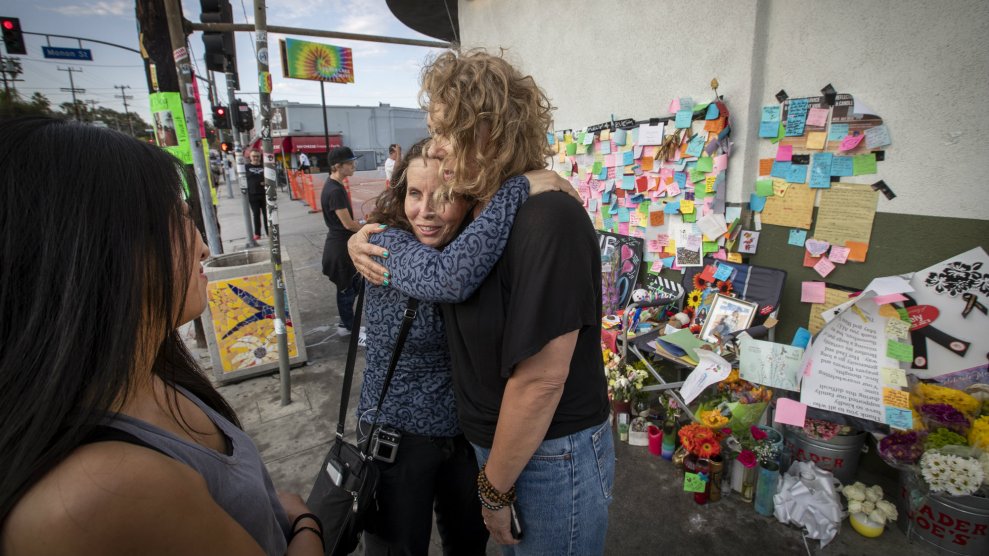 MaryLinda Moss and Lynne Westafer hug at a memorial outside the Trader Joe's in Silver Lake, where they were held hostage during a standoff in July.Allen J. Schaben/Courtesy of the Los Angeles Times

“There’s always hope.” That’s what MaryLinda Moss told the gunman who had taken her and a dozen others hostage at a Trader Joe’s in Los Angeles, California. Moss then put her hand on his heart. She told him he was a good person.

The 55-year-old Moss, an artist who exudes calm from years of trauma therapy and healing work, ended up helping negotiate an end to the crisis.

She remained calm even as her husband texted her, worried.

“It’s complicated,” she texted back. She reassured him she was okay, and wrote, “I can’t text anymore. We are negotiating.”

“Her goal was to get everyone out safely without further bloodshed,” columnist Robin Abcarian, who wrote about Moss for the Los Angeles Times, told me via email.

Moss had gained the gunman’s trust by bandaging his wounded arm. She helped mediate calls with police in order to calm the gunman, who wanted to get out alive. And, calmly—without a weapon—Moss did manage to get them out alive.

Looking for stories of justice prevailing, or of people who think of others? Read on! Recharge is a weekly newsletter full of stories that will energize your inner hellraiser. You can sign up at the bottom of the story.

Have a Recharge story of your own or an idea to make this column better? Fill out this form or send me a note to me at recharge@motherjones.com. Have a great week ahead and make sure to sign up for the newsletter below.