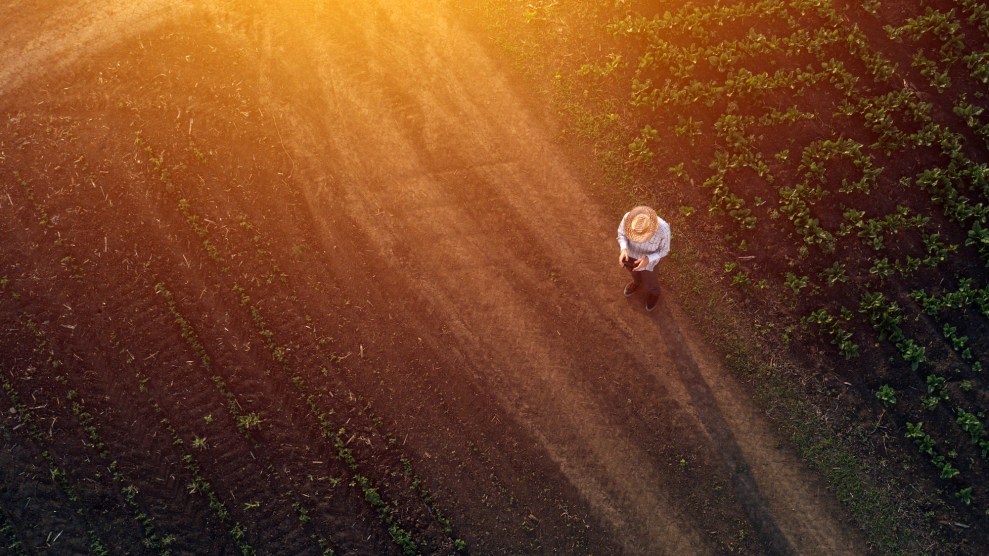 A widely cited study on high suicide rates among agricultural workers may be inaccurate, according to a retraction issued by the Centers for Disease Control and Prevention last week. The report had been the subject of news articles across national media, including at least two in Mother Jones.

The study, from 2012, was a survey of 17 states that estimated there were 84.5 self-inflicted deaths per 100,000 workers in the “farming, fishing, and forestry” occupational group—easily the highest of any group. However, last week, the CDC published a notice in its Morbidity and Mortality Weekly Report that the study’s authors would conduct a “thorough reanalysis” because of coding errors that could invalidate the six-year-old statistics:

Recently, MMWR Editors were informed by the authors of “Suicide Rates by Occupational Group — 17 States, 2012” (1) that some results and conclusions might be inaccurate as a result of coding errors for certain occupational groups. The authors are undertaking a thorough reanalysis of the data. This notice is to alert readers about the coding errors while the reanalysis is conducted to assess the validity of results and conclusions in the publication.

The CDC notice comes on the heels of an article in the New Food Economy that called out reporters and politicians for conflating the “Triple-F” occupational group’s suicide rate with that of farmers. “Under the federal occupational guidelines,” the article reads, “farmers are classified as having a ‘management occupation,’ not a ‘farming, fishing, and forestry occupation.’…The suicide rate among managers, in contrast, was exactly average.”

The New Food Economy article authors suspected, prior to the CDC’s retraction, that the 2012 study’s authors had incorrectly classified farmer suicides with Triple-F suicides. Following the publication of their article, CDC spokeswoman Courtney Lenard confirmed to them that the report had lumped in farmers and ranchers—both management professions—with agricultural workers, leading to an overestimation of the Triple-F occupational group suicide rate and an underestimation of the suicide rate among managers.

In April, when I was working on an article about farming groups writing Congress for mental health services funding,I asked Lenard whether the agency had any data further breaking down the Triple-F occupational group: “For example, do you have the suicide rate specifically for farmers? Fishermen? Foresters?” Lenard told me the CDC did not have more specific or up-to-date statistics at the time and was not aware of any other data. On Monday, I followed up to ask why the study was retracted, how the CDC defined “coding errors,” when the reanalysis would be complete, and whether the New Food Economy‘s assessment that farmers are considered “managers” at a federal level is accurate.

Lenard responded Tuesday but did not answer any of those questions: “The scientific authors are working diligently to reanalyze and publish corrected data,” she wrote. “We apologize for the errors in the report. Suicide is a serious public health problem that can have lasting harmful effects on individuals, families, and communities.” Lenard has not responded to further request for comment regarding the frequency of CDC retractions.

Meanwhile, the National Farmers Union, which has advocated for behavioral health support for farmers and in April signed onto a letter to Congress citing the retracted analysis, maintains that workers in farming and rural communities need behavioral health services—whatever the CDC’s reanalysis may turn up.

“There is an overwhelming amount of evidence that mental health issues and suicide rates are well above average for all who are involved in agriculture,” said spokesman Andrew Jerome in an emailed statement. “Farming can be an extremely high stress occupation fueled by economic volatility, strenuous working conditions, and a significant deficit of mental health services and professionals in farming communities.”

“I find it reprehensible that they issue a retraction but leave us ‘hanging’ until they get their statistical act together.”

Indeed, these are serious concerns: The Department of Agriculture predicted in February that net farm income would hit its lowest point since 2006 this year. And the agriculture, forestry, fishing, and hunting industry has the highest rate of fatal work injuries, according to the Bureau of Labor Statistics. However, until the CDC’s reanalysis comes out, it will be difficult to determine what effects such conditions have on suicide rates among agricultural workers on a large scale. A review of the term “suicide” in the National Institute for Occupational Safety and Health’s database yields little recent literature. One study examining suicides and murders among farm operators and workers found that as a group, they had a higher suicide rate than other workers between 1992 and 2010. Another found that in three southeastern states, farmers had a higher suicide rate than other types of workers—but it only examined white males.

The group Farm Aid said in a statement Thursday that it has seen a 30 percent increase in calls to its Farmer Resource Network hotline in 2018.

The latest version of the Senate farm bill, which the Senate is expected to vote on soon, calls for the reauthorization of the Farm and Ranch Stress Assistance Network, which was established in 2008 but never funded. This year’s bill would authorize $10 million a year to support FRSAN—but those funds may need to go through appropriations committees first. Reana Kovalcik, spokeswoman for the National Sustainable Agriculture Coalition, clarifies that only programs with mandatory funds are guaranteed federal dollars.

While the farm bill languishes on the Senate calendar, the CDC has offered no timeline for its reanalysis of the 2012 study. Brenda Cochran, a Pennsylvania dairy farmer who helps run the advocacy group Farm Women United, told me she is frustrated with how the CDC has handled its retraction so far. “This is very serious, because the retraction has the potential to send out the wrong message that there is nothing really out of whack ‘down on the dairy farm,’ but there surely is,” she wrote in an email. “I find it reprehensible that they issue a retraction but leave us ‘hanging’ until they get their statistical act together.”