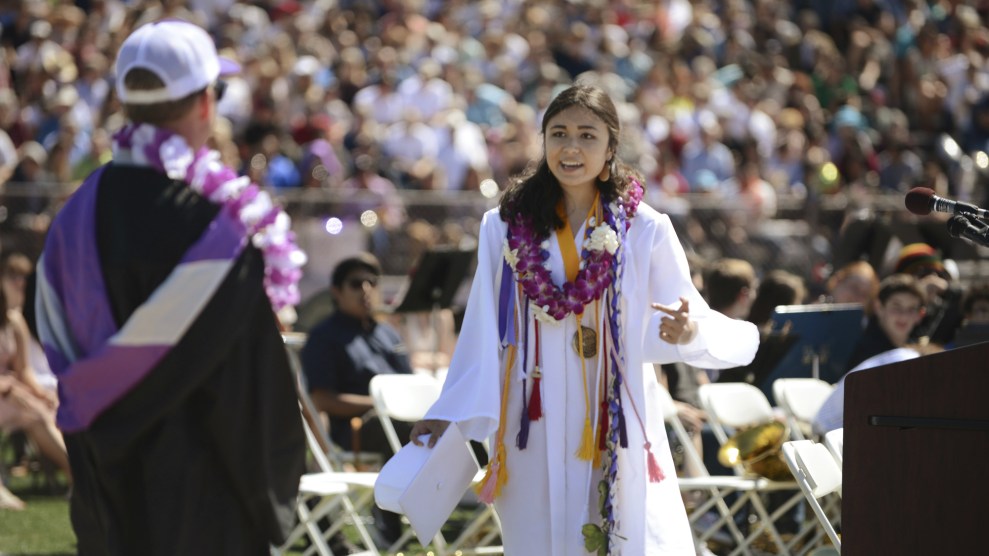 No, Lulabel Seitz would not shut up. The first in her family to graduate high school, the Petaluma, Calif., senior wouldn’t let school administrators stop her from publicly talking about sexual assault at school.

“Let her speak!” her classmates shouted when her mic was cut, four minutes into her speech.

The high school principal defended the muzzling, telling the Press Democrat, “We were trying to make sure our graduation ceremony was appropriate and beautiful.” But school officials declined to comment on the assault allegations, citing student privacy issues.

Seitz quickly turned to YouTube to get her message out. “Learning on a campus in which some people defend perpetrators of sexual assault and silence their victims—we didn’t let that drag us down,” Seitz, who is headed to Stanford, said in her uncensored speech, which has now racked up hundreds of thousands of views. “We may be a new generation, but we are not too young to speak up, to dream, and to create change.” (Press Democrat)

Hi, David Beard here, and this week in Recharge, I’m profiling people who stood up for truth, love—and even for strangers. Recharge is a weekly newsletter full of stories that will energize your inner hellraiser. You can sign up at the bottom of the story.

Have a Recharge story of your own or a suggestion on how to make this column better? Send a link or a note to me at recharge@motherjones.com. Have a great week ahead and make sure to sign up for the newsletter below.