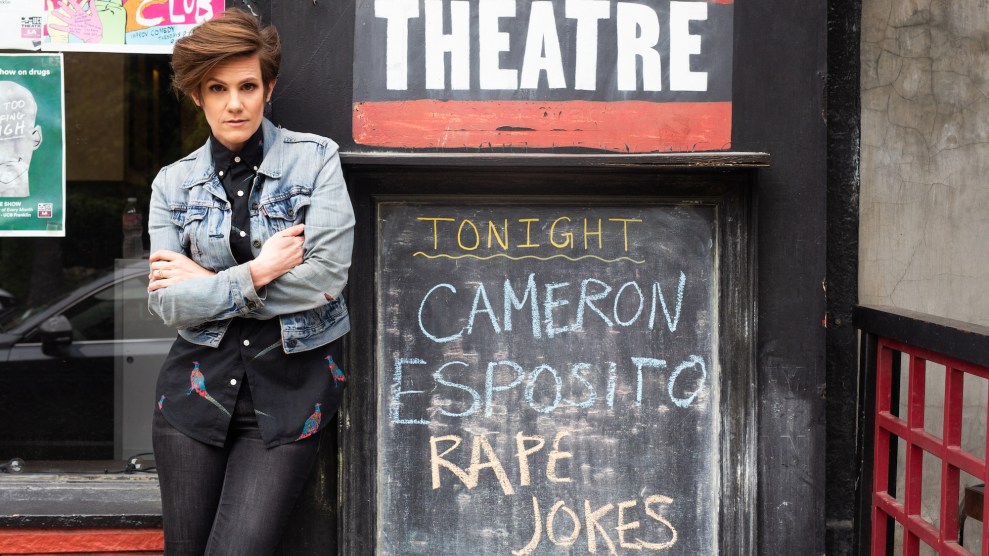 Cameron Esposito has never been shy about getting personal on stage. “Chunks of my body are being smashed out of my body by my body!” she declared in a memorable joke about menstruation a few years ago. But until now, the stand-up comic hadn’t told any jokes around her experience as a survivor of sexual assault, much less a full hour of them. Her brand-new special, Rape Jokes, is an hourlong set that reimagines how a rape joke is defined and where sexual violence does—and doesn’t—fit into comedy.

Esposito worked on the set in pieces, all over the country, with audiences of between 50 and 100 people. The result is masterful and hilarious, weaving Esposito’s signature loud, friendly style with stories from her childhood, her relationship to the audience, and very funny jokes.

She’s explored this topic before: An episode of the first season of Take My Wife, the semi-autobiographical TV show Esposito co-wrote and starred in with her wife, Rhea Butcher, centers around a male stand-up comic’s utterly disrespectful joke about rape, ending with a stream of sexual assault survivors coming out. But Esposito felt that no one had really taken on sexual assault through a stand-up set. “If I was going to start talking about this, I wanted to also finish talking about this, not just jam a five-minute joke into an hour that’s about something else,” she says.

The special went live online Monday morning on her website and at Vulture. You can also watch it here—it’s free, but viewers can donate on a sliding scale to the Rape, Abuse, and Incest National Network, the nation’s largest anti-sexual violence organization.

Esposito spoke to Mother Jones about her new special and her mission to use comedy to open a larger conversation about sexual assault.

Mother Jones: The special is out today—how do you feel?

Cameron Esposito: Excited, but a little exhausted. Just because I’ve been doing a lot of talking about it, which is really great but also—ugh! Sometimes I’m like, “Why do I do this to myself? Why do I come up with a great idea that then I have to actualize?” It’s emotionally hard, you know? Does that make sense?

MJ: Yeah, it does. Before you filmed the special, you worked on this set all over the country with these really small, intimate crowds. Could you take me back to your very first performance?

“I didn’t see somebody in the stand-up world talking about sexual assault as if it is a real thing that is a part of many people’s lives.”

CE: The first time I did it was in Sacramento at this really small theater called the Comedy Spot. It’s a family-owned business, and the proprietor is this super nice dude named Brian. It just felt like a really nice place to—I got to do this where I wanted to go work out the material, and that was the first place. Very supportive group of people working at the theater, very supportive group of openers that opened the show. I think it went really well. It wasn’t as funny as it is now at the start, because that’s the nature of stand-up. You kind of figure out where to put jokes in. But it was still four sold-out shows and a really kind group of people.

MJ: You’ve been doing comedy for about 15 years, and you’re not exactly known for holding back when it comes to discussions of bodies and their weirdness, and some of the things that come with being a woman or being queer. What made you decide this was the right time to talk about your own experience with sexual assault?

CE: I know who I am and I like myself, but sometimes I’m like, “Jesus, Esposito, just take like six months where you’re not like, doing the wildest possible material.” [Laughs.] Truly, I just didn’t see this perspective elsewhere. I’m not saying that because I’m some hero. I just didn’t see it. I didn’t see somebody in the stand-up world talking about sexual assault as if it is a real thing that is a part of many people’s lives, and that there are going to be survivors in the audience, and that we should talk about the ways in which culture creates this perfect scenario for this to happen. It just felt like, “Well, then I guess I’ll do it.”

MJ: How did you arrive at the idea to do a whole hour, and to film it as a special, and to call it Rape Jokes?

CE: It’s not like I’ve never talked about this onstage. And I’ve written about it. On my television show, Take My Wife, there’s an episode that’s about rape jokes. But I have never kind of outed myself on stage and then talked about what I thought led to that happening in my life and what it’s been like since and how I operate in the world.

If I was going to start talking about this, I wanted to also finish talking about this, not just jam a five-minute joke into an hour that’s about something else. It’s not 60 minutes of jokes about rape. It’s creating this whole sort of larger understanding of who I am as a person and the way I was raised and the lack of sex ed and my disconnection from my own sexuality. All of that stuff, I felt, was important to cover to give this full picture. It just felt like an hour was the right way to do that.

And then calling it Rape Jokes, I mean, that’s where the whole thing started. I kind of sat upright in the middle of the night and was just like, “Rape jokes.” Like I just knew that’s where it had to start. We think we know what we’re talking about when that phrase is said. And this is a sort of challenge to that: Does that have to be the way that we talk about assault?

MJ: Going back to Take My Wife—I watched it with my girlfriend, and I was astounded by that episode. This was way before #MeToo, and there was the whole scene where after telling a rape joke onstage—I’m paraphrasing—Bob apologizes to Rhea and says, “Oh, I didn’t know that you were a survivor of sexual assault,” and your character says, “So am I.” And then you have like 15 other women following, saying “So am I, so am I.” It feels almost like a predecessor to the #MeToo wave.

CE: Yeah. Absolutely. It’s also not just women. There’s a male survivor in there. There are audience members. There are comics. But it is wild that we used the phrase “I am too,” and then it eventually became the #MeToo movement. I’m as floored as it by you are. [Laughs.] We just wanted to show that this isn’t necessarily one unreasonable audience member who’s upset by a joke, and it also isn’t somebody whose earth is shattered by that joke. You should assume there are survivors in the audience, because numbers-wise, there absolutely are. The survivors aren’t going to be crushed by your joke. They’ve already lived through trauma that is much larger than a joke. But maybe your jokes should be pretty good if you’re dealing with a topic that affects people in a real way.

“We’re all laughing at something that is painful to take the power out of it. I think comedy is a really perfect medium for this.”

MJ: How did you think your audience would react when you released the special?

CE: I’m unclear. It literally went live like, now. At 9 a.m. is when it went live on my site, and that’s when we started talking. I wanted to make sure that an audience had the choice to opt in or opt out. Folks can watch it if it feels right for them. That’s also why you can stream it for free, for the same reason. Although I haven’t heard from anybody who has had a negative experience watching it. It’s not deliberately graphic at all. So yeah, we’ll see. This is a big experiment.

MJ: Was it important for you to use comedy as the vehicle for this, or was that just what came most naturally?

CE: I mean, it’s what I do, so I think it was going to be. Unfortunately, I have no musical talent, or any other art. I guess I act and I write, but I already did it there. I think the thing about stand-up is that it’s first-person speaking. You speak about your own experience, which feels particularly powerful on this subject. Humor is in general a coping mechanism for pain, and it’s a way of dealing with things that can feel really unjust through unity, by bringing us all together. We’re all laughing at something that is painful to take the power out of it. I think comedy is a really perfect medium for this.

MJ: How would you suggest all us non-comics go forward talking about sexual assault?

CE: Well, I don’t know that I can be prescriptive in how I think folks should talk. What I would advocate for is education. I think we’re being sold this idea of, men are upset because they have to watch their behavior now, when in reality the men that I know are upset because they think these are terrible stories too. I think it’s really about getting the right information. And so this stand-up special is hopefully a source of information. Outside of that, it’s not being fooled by what seems to be the simplest answer, which is that we’re all on opposite sides of this issue, fighting it out. I don’t believe that.

I also think that [the] culture fails men by not supporting and allowing men to have diverse thoughts or emotions. It’s like a circle that perpetuates itself. You tell men, “You can only be angry about this…You can’t be sad about this.” And then male anger is part of the reason that this happens.

MJ: Where does Rape Jokes go from here? What do you want to do with the set?