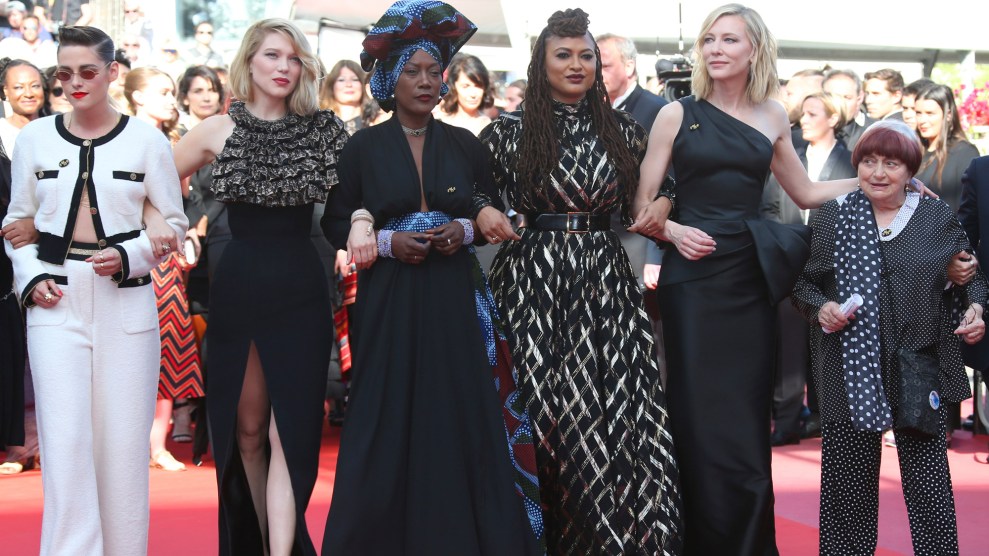 At the Cannes Film Festival on Saturday, actress Cate Blanchett and 81 other women in film marched in silence on the red carpet to call out the lack of female directors selected for the world’s top festival.

The women stopped halfway up the steps to the Palais des Festivals, and Blanchett, in a statement read alongside documentary filmmaker Agnes Varda, demanded equal pay and safer working conditions for women. Blanchett, serving as Cannes’ jury president, called for a world “that allows all of us in front and behind the camera, all of us, to thrive shoulder to shoulder with our male colleagues.”

Blanchett, who was joined by Ava DuVernay, Salma Hayek, and Kristen Stewart, said that the 82 women protesting represented the 82 female directors whose films had been selected for the festival since it began in 1942—a stark contrast to the 1,688 male directors that she said had climbed those steps before. This year, just three of the festival’s 21 films were directed by women. Just one woman, Jane Campion, has won the festival’s top prize, for the 1993 film The Piano. The red carpet protest was organized by the collective 5050×2020, which works to address gender inequality in the film industry.

“Women are not a minority in the world, yet the current state of our industry says otherwise,” Blanchett said. “As women, we all face our own unique challenges, but we stand together on these steps today as a symbol of our determination and our commitment to progress. We are writers, we are producers, we are directors, actresses, cinematographers, talent agents, editors, distributors, sales agents, and all of us are involved in the cinematic arts. And we stand today in solidarity with women of all industries.”

You can watch her speech below.