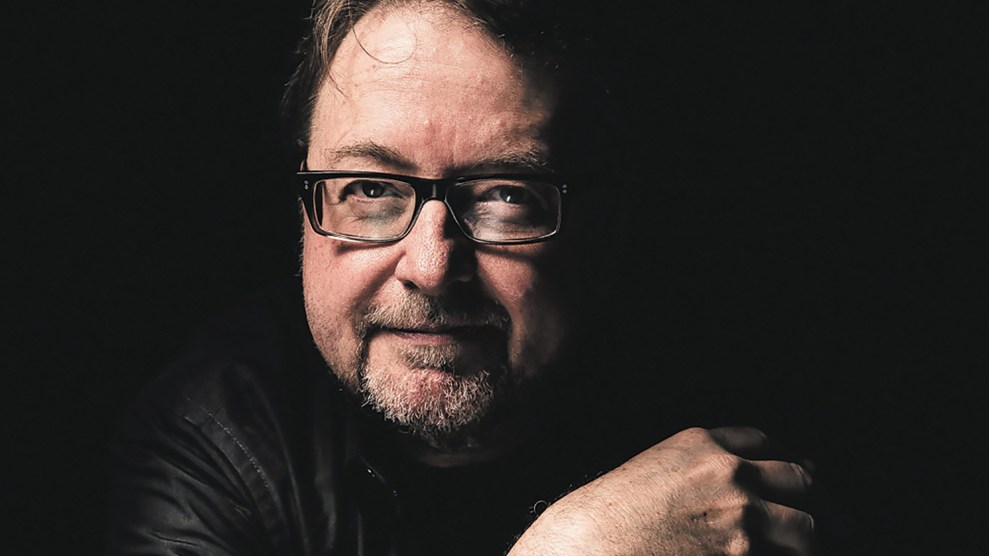 Big Angel—patriarch of the De La Cruz clan, “El Jefe” emblazoned on his coffee mug, a man who once “could make the walls crack with his voice”—is dying of cancer. Relegated to a wheelchair, he realizes that “somebody was going to have to put his shoes on him. Infuriating.”

So begins The House of Broken Angels, Luis Alberto Urrea’s rollicking portrait of a Mexican American family as its four generations gather in San Diego for Big Angel’s last birthday. The author of eight novels, four poetry volumes, and five nonfiction titles (including 2005 Pulitzer finalist The Devil’s Highway), Urrea grew up reading immigrant sagas but never came across one in which he recognized himself. So he set out to craft an American tale whose characters “happen to speak Spanish and admire the Virgin of Guadalupe.”

Mother Jones: In the author’s note, you write that your father gave you a copy of The Godfather during a 27-hour bus trip to visit family in Mexico. He told you it would change your life.

Luis Urrea: It was my first trip into Sinaloa, deep Mexico. I was 14, maybe 15. This was a hallucinatory bus ride. At one point, in the middle of the night, people surrounded the bus and were shooting into the air. My dad thrust this book upon me, full of mad violence and sex and capitalism and culture. It was a ripsnorting good read, but it haunted me.

“Masculinity is kind of a toxic curse, isn’t it?”

LU: It wasn’t really about the Mafia. It was about the family and how it adapts to how the United States works, for good and for ill. I realized I was proud of my family. When I was a little boy in Tijuana, it was wonderland. We left when I was probably four—I was dying of tuberculosis. My mom was American; my dad was Mexican. They came [here] to get me better. During grade school we moved to a white, working-class suburb in San Diego and there were no Mexicans. I joined the Boy Scouts and the guys started calling me a “greaser wetback.” I had never heard such a thing. Tijuana, and Mexico by extension, stopped being a wonderful place—it took on all these elements of shadow and guilt and shame. I think my father had some sense that The Godfather would talk to this experience for me. Half the story is of assimilation and half is hanging onto your history and family.

MJ: You drew inspiration from a birthday party for Juan, your half brother, who died shortly thereafter.

LU: Juan was a patriarch even when he was a kid. He and his wife had a little restaurant in Tijuana and my dad would take me there. Juan knew I was a reader, so he would ceremonially pass me his used paperbacks. He liked to foster my interests.

MJ: Was his party similar to Big Angel’s last hurrah in the book?

LU: It wasn’t as inappropriate—but yeah. They put up these tents, and people came and brought sodas and beer and food, mostly Kentucky Fried Chicken and pizza and spaghetti. Juan was a robust man eaten away by cancer. He’s sitting there in his little wheelchair and people are coming and taking a knee and thanking him, and they kiss his hand or bring him a little gift, and it hit me that it’s the wedding scene of The Godfather. You started seeing who this guy was—all these lives he touched. At moments during the day, he’d have to go lie down. And he called for me. Just like in the book, he patted the bed and said, “Get in bed with me, carnal.” So it turned into this daylong, episodic, meditative time: the two of us in bed talking about our lives. It was the most intimate moment probably we’d ever allowed with each other. The moment that got me was when the family started coming in and getting in bed with us. We ended up with this dogpile.

MJ: Some De La Cruz family members are undocumented. Others are US-born. What tensions does that create?

LU: A lot of our family was undocumented. My mom and dad were both super conservative. My dad had a green card; my mom was an Eisenhower Republican who did not approve of all the “illegal people.” My father—a little late—tried to help my family members foster the illusion of legality by letting them all use our address as their permanent residence—we got mail for like 13 people. One day the mailman said to my mom, “How many damn people have you got living in this house?” That set off her Nixonian law-and-order side. She went crazy! She actually told Juan she was going to turn the entire family in.

MJ: The men in your book do a lot of macho grandstanding. But there’s a scene where Big Angel and Little Angel realize they’ve never kissed each other, so Little Angel plants a kiss on his brother’s forehead. It’s such a tender, funny moment.

LU: Masculinity is kind of a toxic curse, isn’t it? The expectations of it were hard on me. The learning-to-swim scene? That’s how they taught me. I was terrified of the ocean, so they kept throwing me into the waves no matter how much I begged. I was just a little kid, but they would laugh at me, and I thought, “Whatever these guys are, I can’t be that thing.”

“I was told nobody with a name like mine would sell a book in America.”

MJ: Your first book, Across the Wire, about people in the toughest parts of Tijuana, was rejected by publishers for a decade. One New York editor wrote, “Nobody cares about starving Mexicans.”

LU: I also was told nobody with a name like mine would sell a book in America. They told me to add an Anglo name. That’s when I added my middle name, ’cause I stupidly was like, “Oh yeah? I’ll be even more Mexican. See how you like that, man!” They didn’t like it. After nine years, bits of that book started getting published in the San Diego Reader, the alternative newspaper. Those editors weren’t kind at all. They would write notes: “Nobody gives a shit about how you feel.” I thought, “That’s the cruelest thing I’ve ever heard in my life.” But it was actually wonderful editing. I thought, “Okay, I’m never gonna be a famous writer. I’m gonna go and get an MFA.” Then Anchor Books accepted a manuscript. Who knows? One of the jests of the universe: As soon as you give up, that’s when they accept it.

LU: I tell my writing students, “No. 1 rule is wear the bastards down!”

MJ: Your work was also part of a banned Mexican American studies curriculum in Tucson, Arizona.

LU: Six books! I was king of the ban.

MJ: Last August, a judge ruled the move unconstitutional, but how did the controversy affect your literary status?

LU: My numbers went up right away—maybe not in Tucson, but elsewhere. They took the books and boxed them. It was so fascist it was unbelievable. It wasn’t just Latino writers—they took the indigenous books. Sherman Alexie was gone. Ofelia Zepeda was gone. They took Shakespeare, because perhaps Chicanos would say “forsooth.” They were eyeing black studies. They were going to make a move on any kind of diversity, starting with us. For now, it has backfired.

MJ: You recently posted an old journal entry that reads simply, “Yes!” And you added, “In spite of this era, I’m working on getting back to that outlook.” What’s your strategy?

LU: Using whatever illusion of celebrity that I accrue to do good things. For example, one of my books is part of the NEA’s Big Read program. I’m realizing, in community after community with Latina kids, I am the first [Latino] author they have ever read; I’m often a voice for immigrant people hiding in shadows. I get to go everywhere and represent what Oscar Zeta Acosta used to call the “cockroach people.” Give America a dose.