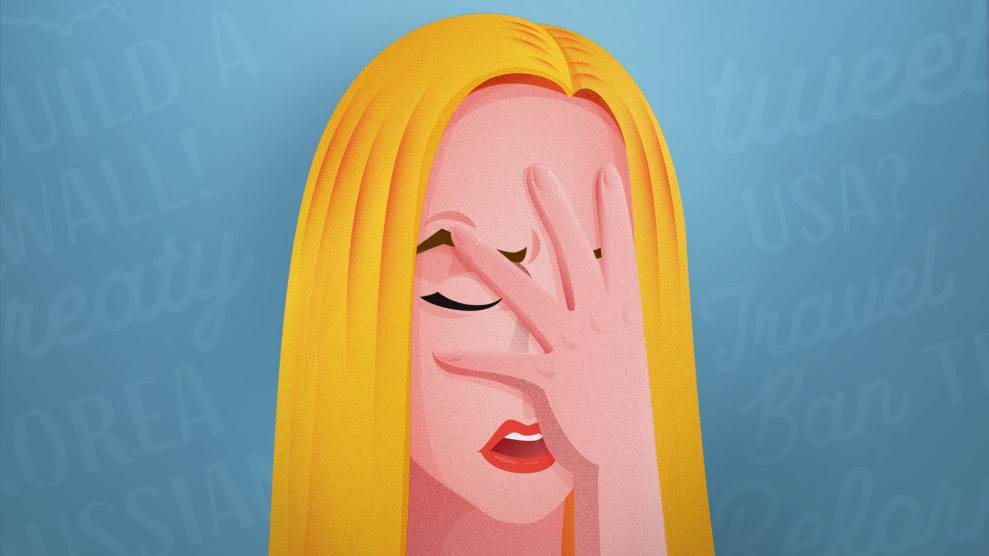 Courtesy of Molly Knight and Cadence13

The president ruined Molly Knight’s week and her podcast. Knight, a former writer for ESPN and author of The Best Team Money Can Buy, a book about the Los Angeles Dodgers, was in the middle of putting together a slice-of-life podcast when Donald Trump was elected. She surprised her 80,000 Twitter followers by going from tweeting about sports to ranting about Trump, and out of her anger came the podcast “The President Ruined My Week.”

Even though the show, which features interviews with public figures and celebrities, was born out of political frustration, the conversations often veer away from Trump talk to topics as diverse as Knight’s guests. Case in point: Knight has so far talked with singer-songwriter Tori Amos, writer Ira Madison III, and actor and comedian Ike Barinholtz, discussing everything from sexism in the music industry to the gay love story “Call Me By Your Name” to whether it would be better to be trapped in an elevator with Trump or Paul Ryan.

In a media landscape stuffed to the gills with podcasts, particularly political ones, what makes “The President Ruined My Week” different? Knight said she wanted to create a podcast that doesn’t just react to the never-ending stream of bad news, but learns how people are dealing with it.

“I think that it’s hard to see how it’s affecting all of us so profoundly while we’re in it,” she said. “It’s like we’re in this fucking category 5 hurricane right now and we can’t survey the damage until it’s over. I want to create a space where people can talk about it.”

Mother Jones talked to Knight about the role sports have played in the resistance, what the podcast would have been called if Trump hadn’t been elected, and Taylor Swift’s political apathy.

Mother Jones: You started your career as a sportswriter, and your last big project was your book about the Dodgers. How did you end up being a Trump provocateur on Twitter?

Molly Knight: Friends of mine who write about sports will ask me if I was nervous about losing followers, because I would assume half or maybe more than half of the people who bought my baseball book lean conservative. That didn’t ever cross my mind. I started tweeting about Trump because it was right versus wrong. It wasn’t like a calculated branding decision, it was just how I felt. I’m just really passionate, it turns out, about trying to stop fascism. God bless those who want me to stick to baseball. It’s not happening.

MJ: What was the turning point for you? Was there a specific moment that caused that shift?

Trump’s election has been terrible,  but it also offered clarity about what matters.

Then after a while, I realized, “Wait, these athletes are on the frontline of resistance.” Liberals will watch MSNBC, and conservatives will watch Fox, and I guess people who I don’t know will watch CNN [laughs], so you’re just in your own echo chamber. The only time that we as a country will watch something together is for sports. So for athletes to denounce Trump or wear “I Can’t Breathe” T-shirts, or with Colin Kaepernick taking a knee to protest police brutality against people of color, it was beautiful because everyone had to see it. It was on MSNBC, it was on Fox and CBS and NFL Network and ESPN and it was everywhere. I thought, “Man, I had this all wrong.”

MJ: What was the genesis of the podcast?

MK: So the podcast had been in the works for a year and a half, and originally it was just going to be a podcast called, “What’s It Like to Be You?” This was pre-Trump, and I was going to be interviewing different people—from celebrities to schoolteachers, air traffic controllers, and janitors—just to get a sense of what their daily lives are like. I even recorded a couple of test episodes with a few celebrities. And then Trump won.

Then I tried to figure out how it could be different than other political podcasts. There are a lot of podcasts that run through the news and react and react and react, but what I found was when I was going to dinner with friends, everyone’s just in this weird state of, “I just cannot believe what is going on.”

I think there needs to be a larger conversation about how everyone is kind of losing it right now and feeling stressed. People are feeling more and more isolated. I don’t want people to feel alone. People can listen to the podcast and feel like they’re not crazy. Trump’s election has been terrible in a lot of ways, but it has also offered quite a bit of clarity about what matters.

God bless those who want me to stick to baseball. It’s not happening.

MJ: What podcasts do you listen to? Are you modeling this off of anything in particular?

MK: I’m not modeling it off of anything in particular. I’m a journalist, and there are a lot of political podcasts right now by people who are not journalists. I will listen to interviews with, quote unquote, big names and just feel like, “God, what a wasted opportunity.” But they bring their own expertise. I really enjoy listening to “Pod Save America,” because these guys worked in the White House.

If I were to get a sitting senator on the podcast, which I’m working on doing [Knight later confirmed at least one senator will be on the show this month], I’m not necessarily going to be focused on policy. It’ll be more focused on them and their day and how they cope with what’s going on and what their take on everything is and what people are saying to them. Do they, like, bicker with their Republican colleagues all day and then go to dinner with them at night? Who are their besties in the Senate? Just kind of humanizing people.

God, I sound so pompous, but human emotion and the human condition is what interests me more than anything else as a writer. I’m just interested in talking to people about how their lives have changed during a white nationalist presidency.

MJ: What kind of guests do you have lined up? Can you give us any hints?

MK: I can’t give specific names because some of them are still being set up. I’m working on a prominent female senator and there are only like 18 of those, so that’s as big of a hint as you’re going to get.

There will be white men, funny, brilliant, woke white men on the show, but I’m interested in elevating voices that haven’t been heard from enough, so I’m guessing that it will probably skew more to female, women of color, men of color, gay people, transgender people. I want to hear from people who have not been heard from.

MJ: Are you planning on only focusing on celebrities and public figures?

MK: No. Part of the reason to do that is obviously because celebrities and public figures have bigger followings, and so when you’re trying to get something off the ground, you want to try to lead with the biggest names you can get. But no, if this goes the way that I hope it will go, it will be a mix of famous people and non-famous people. It’s just in its nascent form right now, so we’ll see how it all shakes out.

MJ: How did you come up with the title? Was there a week in particular this year that Trump ruined for you?

MK: Like every week [laughs]. We bandied about a bunch of different options, and that was the one that stood out. There has been some misconception that it’s just going to be a bitch-fest, which it’s not. I want to talk to people who are still trucking and still creating and still working and still functioning and are still having a voice. The other side of that group would be Taylor Swift. I guess it was her birthday recently, and she didn’t really think this was a political statement, but she said, “This has been the best year,” and I said something like, “Wow the weather must be nice on Earth 2.” You want to find the balance between being outraged all day long and your work and being Taylor Swift in a hermetically sealed bubble.

MJ: In your first episode, with Tori Amos, you talk gender. In your second episode with Ira Madison III, you talk race. As a white woman, how do you strike that balance between talking about how the Trump administration has affected you and how it has affected or will affect people of color and other marginalized groups?

MK: For me, rather than find it threatening, I actually find it comforting to mention there’s stuff that I just don’t know. Like I said with Ira, which some people might have just been like, duh, but I said I understood that there was virulent racism in this country and systemic racism in terms of job opportunities and horrible challenges that people of color face. What I did not understand was that so many people would vote for Trump and shared his views. I thought he was going to be roundly rejected. Frankly, it was naive on my part.

All I can do is talk about my own experiences. As a sportswriter, I was, if not the only female in the locker room, then one of them. And when certain things would happen to me I wouldn’t let myself think that it was because I was a woman. I would have gone crazy. I think I was just in denial for a long time about how hard it was. I think the one thing the Trump election has done is we are no longer in denial about things. We can’t be anymore, because it’s just right there.