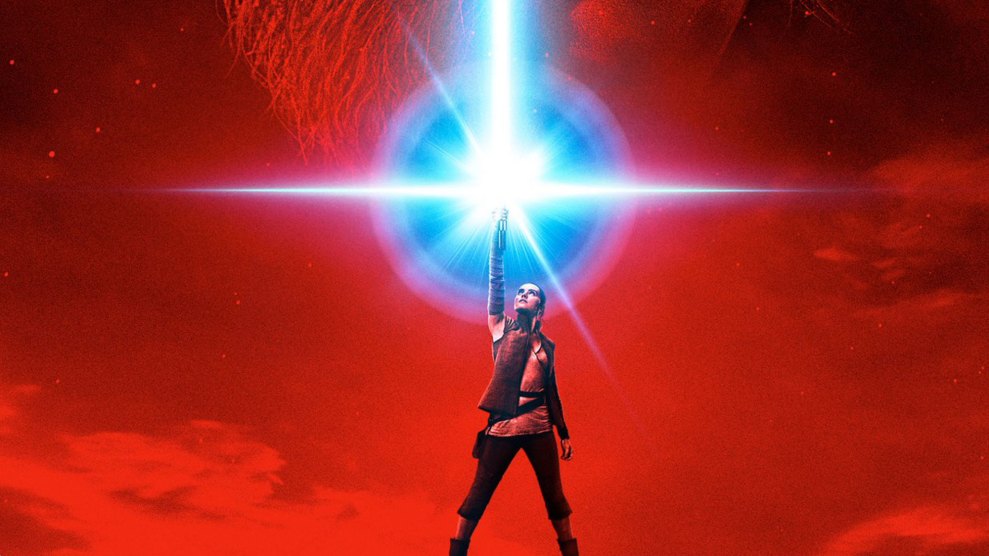 A long time ago in a galaxy far, far away…

A film called the Empire Strikes Back set the bar for sci-fi sequels. The year was 1980. It’s still, to this day, considered by many people to be the best Star Wars film. When 2015’s Force Awakens debuted to somewhat surprising critical acclaim, expectations for its sequel to follow in Empire’s footsteps were unavoidable. This was the daunting task director Rian Johnson faced with The Last Jedi, the latest Star Wars installment to hit theaters.

When last we left our warriors from the stars, they had just destroyed another Death Star for the umpteenth time. Our core band of heroes, Rey (Daisy Ridley), Finn (John Boyega), and Poe (Oscar Isaac) split into two groups. Rey, the one in whom the Force had awakened, heads off to find Luke Skywalker on a water-world at the far reaches of the galaxy and recruit him to come back and help the Rebellion one last time; while Poe drags a still-unconscious Finn across the galaxy on a pedal-to-the-metal escape from the villainous First Order.

The Last Jedi picks up almost immediately after this and sends us not one, but two surprises. Luke is not the bright-eyed bushy tailed hero we last saw in Return of the Jedi. He’s blinded himself to the Force and become a cantankerous old bastard. Even worse, back on the Rebel base, Vice Admiral Amilyn Holdo (Laura Dern) is intensely angry at Poe and Finn for not staying and fighting the rest of the First Order. She accuses them of cowardice and defying a standing order to always engage the enemy. She wants them both court-martialed, the sentence for which is death. This is not the Rebel Alliance we have come to know and love! Leia is none-too-pleased, but agrees to a compromise since a rebellion divided cannot stand. She negotiates to save Poe’s life but is unable to get immunity for Finn, who already had a reputation for cowardice from back in his Stormtrooper days, and is still in the coma he fell into at the end of the last film. He cannot defend himself. Poe visits Finn in the hospital and promises that he’ll save him.

Back on Luke’s island, he and Rey are not getting along. “The Rebellion needs your help!”

Luke, it seems, is determined never to teach another person how to be a Jedi, but he isn’t really currently a practicing Jedi because he’s lost “hope” and is blind to the Force. He’s been alone on this dumb island for 10 years and he tells Rey he can’t even use his lightsaber anymore. But there’s something about Rey that he takes a shine to.

Luke announces that they will go on a trip to Coruscant, the nicest planet in the galaxy. The non-practicing last Jedi is harsh on Rey, firm and demanding. Rey doesn’t know if it’s because he hates her or if it’s because he respects her. Rey keeps trying to get Luke to tell her what happened in the past to make him go all nutso. Finally, Luke takes her to the ruins of a temple outside the city.

“This was my Jedi school.”

Kylo Ren (Adam Driver) was his best student and best friends with another Jedi pupil named Sebastian (Joseph Gordon-Levitt). Sebastian was very talented but didn’t have Kylo’s work ethic. One holiday, Kylo went with Sebastian’s family for break and met his sister, Rose (Kelly Marie Tran). The two instantly fell in love. When Sebastian and Kylo returned to school, Luke saw a new Kylo. Happier, lighter. As though for the first time in his life he wasn’t being pulled down by an anchor. But then things changed. Sebastian became jealous that Kylo was no longer “his friend.” He confronted Kylo and demanded that he cut it off with Rose, but Kylo refused. In return, Sebastian told his father (Andy Serkis) that Kylo was a descendent of Darth Vader and that Kylo, in his sleep, would often say things that indicated he was maybe going to the Dark Side. Rose’s father forbid Rose from seeing him again. This finally pushed Kylo over the edge. One night, Luke felt a disturbance in the Force. He saw a vision of what Kylo would soon do but didn’t trust himself. No way could his nephew slaughter Sebastian and the rest of the pupils in the temple. But then that is exactly what happened. So ashamed was Luke that he vowed never to teach another Jedi or see another vision again.

Meanwhile, back at the Rebel base, the court-martial is not going well. Vice Admiral Amilyn Holdo says that if they don’t punish people for retreating, they could soon have a whole mutiny on their hands. Then the Rebellion would surely fail. DJ tries mightily to mount a defense and argues that far from showing cowardice, the soldiers had just DESTROYED THE DEATH STAR. It had been a suicide mission but they had pulled it off. The strategic retreat came after. Despite this, Admiral Ackbar (Timothy D. Rose) still finds them guilty.

On Coruscant, Luke and Rey return to their hotel. Rey looks out at the beautiful view and thinks about how growing up on her little desert planet, she always wanted to see such a sight. Yet now that she has, it somehow disappoints. Luke asks her to go down and check on Chewbacca. Luke says he senses something is wrong. She runs out of the room.

DJ has not given up on Finn. He meets with Vice Admiral Amilyn Holdo and cuts a deal. He hands over a video recording from the ball robot’s memory banks which appears to show that the person who gave the order to retreat was actually… Rey. Poe agrees to confirm the contents of the video in exchange for Finn’s life.

Rey Finds Chewie (Peter Mayhew) sitting in the Millennium Falcon arguing with one of the robots. “Are you ok?” Rey asks. “Bark,” he responds. He’s fine. She is confused and returns to the hotel room.

“Luke? Luke?” Luke has changed clothes and is now dressed in his original Jedi outfit from A New Hope. He is holding a lightsaber to his head. His finger is on the button. “I thought you said you couldn’t use your lightsaber anymore?” Rey asks. “I lied,” Luke says. She pleads with him not to kill himself, but he says he has to. “I will be the last Jedi!” He asks her to leave so that he doesn’t have to do it in front of her. She refuses. He demands that she leave! She refuses. “If you truly want to be the last Jedi, you’ll have to kill me, because I am a Jedi.” “Hooah!” Luke shouts. A tussle ensues for control of the lightsaber, each using their Force to pull it from the other. The hotel room is destroyed. In the end, Rey wins. She deactivates the lightsaber and puts it on her belt. Luke falls to the ground in tears.

Then Chewbacca shows up and barks an important message. “What’s that, boy? You heard something on the radio?” Rey asks. “I’m needed at the Rebel base? Finn? Finn’s in trouble? Let’s go!” They leave Luke alone in the hotel.

Rey returns to the Rebel base and is arrested. Though she could easily escape because she is (one of) the last Jedi, she does not. She respects the rule of law. Vice Admiral Amilyn Holdo plays the tape of Rey giving the order to retreat. She asks Poe to authenticate the tape. Poe is too ashamed to look at her in the eyes.

“Do you have anything to say for yourself?” Holdo asks Rey.

“You can take my life, but you can never take my hope!”

“Well then I have no choice but to…”

“May I be heard?” a voice booms from the back of the hall.

Everyone gasps. Leia smiles. Luke begins toward the podium.

I don’t want to spoil the rest of this movie for you, but you get the idea. There is some other stuff that happens that I didn’t mention. R2-D2 is around. Yoda has a cameo.

My main problem with the film is that Daisy Ridley doesn’t really get to spend much time with Oscar Isaac and John Boyega. When they’re together, the film really clicks, but when they aren’t it’s sort of like two very different movies cut together. But the ending does set up the next film nicely.