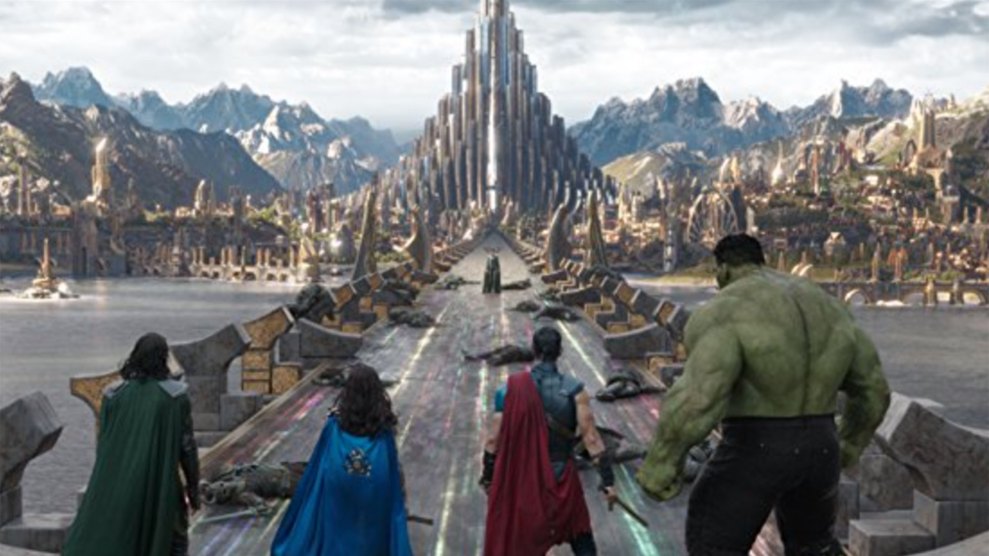 Who is the least popular Marvel movie superhero? It’s complicated. If we’re going off the box office, the answer is Hulk. Edward Norton’s 2009 turn as Bruce Banner in The Incredible Hulk made far and away the least amount of money.

Based on critical reception, though, Thor gives Hulk a run for his money. If the reviews for Thor’s inaugural outing in 2011 were “mixed,” the follow-ups were straight-out bad. 2013’s The Dark World has the lowest ratings of any MCU film on both Rotten Tomatoes and Metacritic.

It’s a pleasant surprise, then, that Thor: Ragnarok, a film about those two characters, would prove to be the best Marvel film in years.

We haven’t seen these guys in a while, since 2015’s Age of Ultron. A lot has happened since. Much of it memorable! (Captain America: Civil War, Guardians of the Galaxy Vol 1) Some of it not. (Ant-Man, Guardians 2) But none of that really has anything to do with Thor or Hulk, who have been off doing their own things.

This is the part where I am going to tell you about the plot of Ragnarok so feel free to skip it not because there are going to be spoilers, but because it is stupid and doesn’t really matter. Ready? Natalie Portman and Thor breakup, and Thor has a nightmare about his home planet of Asgard getting destroyed, so he goes around the universe to explore and finds this evil fire monster who is bad, and Thor defeats him and returns to his home planet to tell Anthony Hopkins that all is good and well, but it turns out Anthony Hopkins is actually his dead brother Loki, apparently undead, in disguise ruling the planet, so Thor and Loki go find the real Anthony Hopkins who Loki had banished to Earth, and they hang out with Dr Strange for a quick second and then find out their dearly beloved dad is dying but before pa’ kicks the can, he informs them that they have a secret sister and, boy, is she evil and she’s going to kill them. Then he dies. Then the sister appears. It’s Cate Blanchett. She says not nice things to them. And she breaks Thor’s hammer. Blah blah blah Cate Blanchett returns to Asgard and starts enslaving people while Thor and Loki end up lost on some sort of gladiator planet run by Jeff Goldblum. Hulk is there too and a New Zealander rock monster and stuff happens.

Not because of what happens—I obviously can’t even really remember all the plot points—but because of how it happens. The problem with the Thor movies has always been that they were ridiculous but earnest, a problem not unlike the one that besets the Captain America franchise. But whereas Captain America films have made up for it with an action-adventure tone that made it work, Thor and Thor: The Dark World kind of just… existed. With Ragnarok, Thor has found a tone that works. Or more accurately, he’s borrowed one that fits. The influence of Guardians of the Galaxy on this film is profound. Not only is it a straight-out comedy with celestial hijinks but also like Guardians, Ragnarok plays with genre in a fun way. There is an 80s inspired thing going on in this movie that is really special.

What levity was in the earlier Thor films came from Thor’s fish-out-water ignorance of how humans work. The joke was on him. (Again, similar to the Captain America movies). But in Ragnarok it’s switched. He’s the relatable one in the movie. It’s Jeff Goldblum who’s gone mad! And Hulk! And Cate Blanchett! And the New Zealander rock monster! And everything else! It also helps that he doesn’t have his hammer. As nice as the hammer was, it made him too indestructible. Here he is almost mortal. Almost. He is still the God of Thunder, of course. *

And Cate Blanchett does a deliciously devious Cate Blanchett in the role of Very Powerful Villain Who Spends Most of the Movie Walking Around Giving Speeches. In the hands of a lesser actor, Thor’s sister would be a flat, predictable mess.  But hammy, scenery-gobbling Cate Blanchett gives it verve. Whenever she’s on screen, it’s a delight.

All of this comes together to make Thor: Ragnarok the best Marvel movie in years. Sorry, Spider-Man.

Correction: An earlier version of this article called Thor the “God of Lightning.” He is the God of Thunder. We regret the error.