We asked a range of authors and creative types to name books that bring solace or understanding in this age of rancor. More than two dozen responded. Here are picks from the best-selling author, journalist, and filmmaker T Cooper, who is busy putting finishing touches on Man Made, his upcoming documentary about transgender bodybuilders. (See trailer below.) 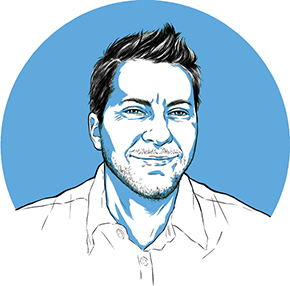 Latest book: Changers (young-adult novel series with Allison Glock-Cooper)
Also known for: Real Man Adventures
Reading recommendations: I frequently find myself turning to Kiss of the Spider Woman, Manuel Puig’s brave and stunning novel from the mid-1970s, but it’s hitting a little close to home just about now—what with the “freak” and the revolutionary locked in a cell together by a corrupt and repressive government. Molina and Valentin make strange but necessary bedfellows who run into some gender trouble and the usual wretchedness (not to mention betrayal), but also uncover unexpected tenderness and hope inside the walls of the prison where most of the novel is set. Running through it all (in the form of 1930s and ’40s movie plots that Molina recounts to Valentin to pass time and ease their suffering) is the promise of stories that are perpetually unfolding somewhere “out there” in another world, despite the horrors happening “in here” in this one. I’m grateful for the escapism, even if sometimes it feels there’s no real chance of escape.

I hesitate to include Lawrence Wright’s Going Clear for fear of becoming “fair game” on both counts, but as more and more ruthless tactics, crackpot psychology, and shrewd brainwashing are revealed in the everyday workings of the Trump administration, the more eerily congruent it all feels to Scientology—an empty shell of a fervent movement begun by a maladjusted ginger who wants nothing more than to be universally worshipped, world famous, and taken seriously by the establishment he claims to abhor? No coincidence both men staked headquarters across the peninsula from one another in Florida.

And then there’s Slouching Toward Bethlehem, by Joan Didion: “I went to San Francisco because I had not been able to work in some months, had been paralyzed by the conviction that writing was an irrelevant act, that the world as I had understood it no longer existed. If I was to work again at all, it would be necessary for me to come to terms with disorder.”

Can’t say it any better than that. It’s time to get (back) to work.