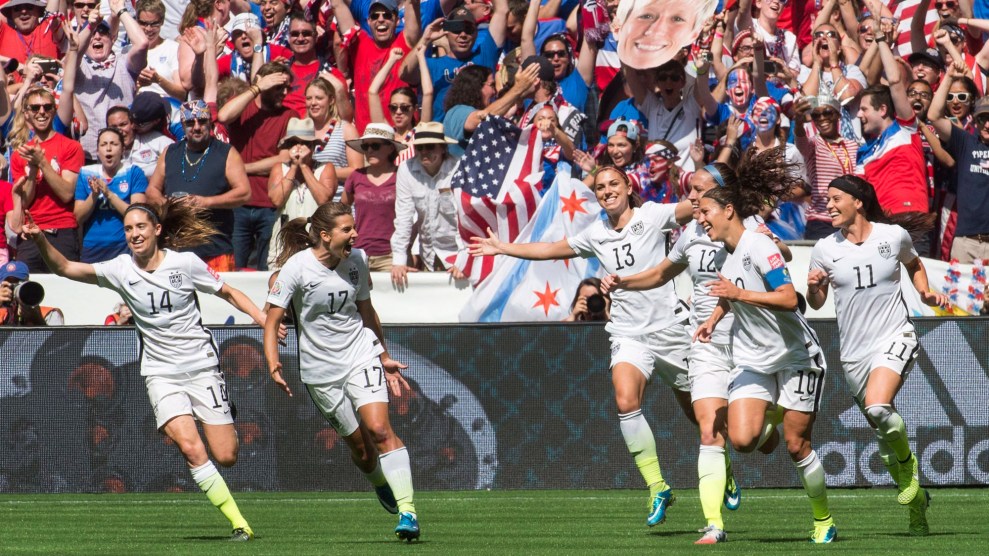 On Wednesday, the US women’s national soccer team notched a notable victory in its pursuit for equal pay. After a multi-year labor dispute, the team came to an agreement with the US Soccer Federation that will carry a big bump in compensation and expanded benefits.

The deal, which was part of an ongoing collective bargaining negotiation, will last five years and include the 2019 World Cup and 2020 Olympics. It is expected to significantly raise players’ base compensation and game bonuses, match per diem stipends with their counterparts on the men’s national team, bolster travel benefits, and improve financial aid for players who are pregnant or adopting, ESPNW reported on Wednesday. The US Women’s National Team Players Association, the union representing the players, would also gain some rights to licensing and sponsorship deals.

This week’s announcement ends a long and contentious fight over the team’s union agreement with US Soccer, the governing body for the sport. The fight came to a boil last February when US Soccer sued the union. At odds was whether a 2013 memorandum of understanding between the two sides could stand in for an earlier, expired collective bargaining agreement. The legal challenge came after the union’s former executive director, Richard Nichols, allegedly told US Soccer officials that the memorandum wasn’t valid and that, if the two sides failed to come to an agreement by the end of that February, the national team would be free to strike before the Olympics in Rio (Nichols denied saying this). A federal judge eventually ruled that, under the 2013 agreement set to expire that December, the team could not strike. But after talks stalled late last year and the players’ union changed leadership, the two sides spent the last four months hashing out an agreement.

And last March, five top players on the women’s national team filed a complaint to the federal Equal Employment Opportunity Commission accusing the national soccer federation of wage discrimination. Financial details from the filing alleged that despite bringing in a projected $18 million in revenue to US Soccer, players on the women’s team earned four times less than their male colleagues. Jeffrey Kessler, who represents the players in the EEOC complaint, told Mother Jones that the charges remained pending and would continue.

As the New York Times reported, the enhanced pay announced this week is not necessarily on par with that of players on the men’s squad, though it means that some players could see their incomes double and earn between $200,000 and $300,000 in a year.

US Soccer president Sunil Gulati said in a statement that the new CBA represents “an important step to continue our longstanding efforts to drive the growth of women’s soccer in the United States.”

The members of the women’s national soccer team aren’t the only women athletes who’ve made progress toward equal recently. Last week, after threatening to boycott the world championships in Michigan and earning the backing of several players’ unions and 20 US Senators, the US women’s hockey team reached a last-minute agreement with USA Hockey to improve compensation, benefits, and opportunities for future players. It included the prospect of each player making at least $70,000 before performance bonuses in the Olympics and world championships. Previously, the players were paid just $1,000 per month during a six-month training period before the Olympics.