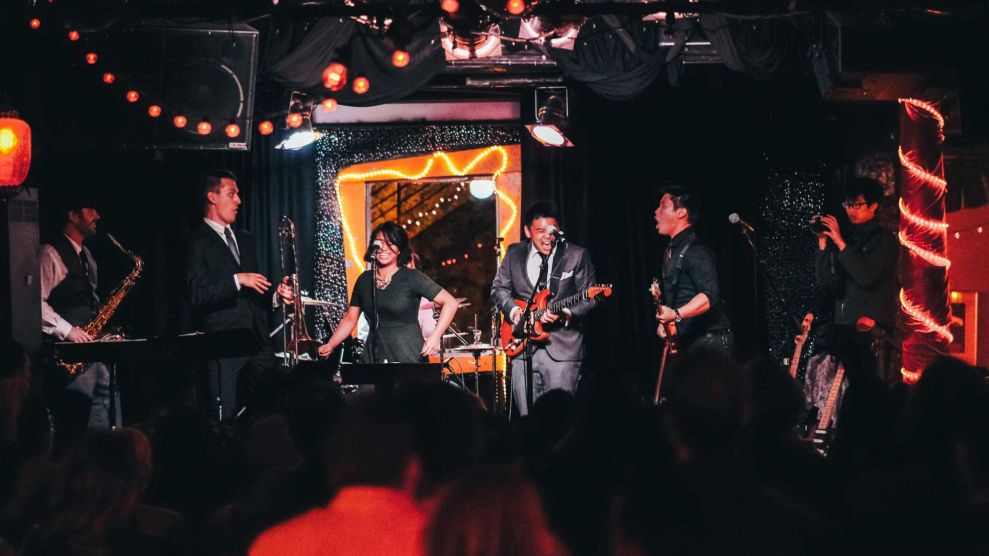 Trace Repeat is a six-piece soul and funk band based in Oakland, California. Listen to their music and find yourself lost in brassy chords, throaty vocals, and seductive lyrics reminiscent of Motown—a movement defined by African American icons like the Temptations and Stevie Wonder. But there’s something different about this band: Three of the six members are Asian American—an identity they have had to grapple with as they’ve gained recognition.

Wesley Woo, 28, and Zach Hing, 22—both of whom now play bass and guitar and sing in the group—first met in the spring of 2015. Woo, who majored in music at the University of California-Berkeley, was gearing up for South by Southwest with a different band; Hing was wrapping up his illustration major at California College of the Arts. At the festival, Woo realized that his music—”an indie rock band heavily based in singer-songwriter influences”—just wasn’t fit for Austin’s boisterous and chaotic festival scene, so when he got back to California, he asked Hing to collaborate on a more energetic band. They quickly settled on funk, drawing inspiration from Marvin Gaye, Stevie Wonder, and Michael Jackson. “The icons I grew up listening to were all black because there were no Asian American icons,” says Woo.

“The icons I grew up listening to were all black because there were no Asian-American icons.”

Over the next few months, they built the band that would become Trace Repeat—recording demos, playing gigs around the Bay Area, and gaining a small but respectable following. Then, in May 2016, they caught the attention of Lauren Lee, a scout from Kollaboration, a national nonprofit that promotes Asian American and Pacific Islander representation in entertainment and media. The group has launched the careers of stars like Kina Grannis and David Choi. “Lauren told us, ‘I’m really interested in investing in you guys because you aren’t doing the thing that all Asian American musicians do,'” says Woo, who describes the prevailing Asian American stereotype as “touchy-feely singer-songwriters who sing love songs and play on acoustic guitar.” In September, with a fresh new set of band members, Trace Repeat competed at Kollaboration’s annual talent showcase, as the San Francisco chapter’s finalists. It was their first major break on a national stage.

Woo points to that night as the moment when Trace Repeat first began to recognize and struggle with their Asian American identity. “For a very long time, it wasn’t really something that Zach or I addressed,” says Woo. “It just so happened that we were both Asian, and other Asians tended to flock toward us” and become fans of their music.

But as the band continued to gain momentum, they began to have racially charged encounters offstage. Once, a man asked Woo where he was really from. Other times, audience members made references to the incongruousness between funk’s sex appeal and the prevailing stereotype of the emasculated Asian male. Yet another time, Woo recalls, “someone after a show actually asked us, ‘So your bandleader—he’s not here tonight, right? There’s a white guy that’s supposed to be leading this band, right?'”

“I just want to be a band—a really dope-ass funk band.”

These experiences ultimately led Woo and Hing to focus on Asian American empowerment during their January Indiegogo crowdfunding campaign for their debut record. “When you’re a musician, you don’t really get to talk about many things that affect you as an Asian American because there’s never really an opportunity to do that,” says Woo.

On the flip side, however, Woo is also wary about pigeonholing the band. “Once you’re an Asian American band you can only play Asian American shows,” says Woo. “I just want to be a band—a really dope-ass funk band.” It’s a struggle common to many artists and creators of color, particularly Asian and Pacific Islander artists who face the lowest levels of media representation.

This month, Trace Repeat will be traveling to Austin—using the extra money they raised after their Indiegogo campaign blew past the initial goal of $5,000 to well over $8,000—to fulfill Woo’s original dream and perform at South by Southwest. When the band reflects on their success so far, Hing says, “We’re just really grateful that there’s a whole community out there, that people are actually paying attention to what we’re doing.”