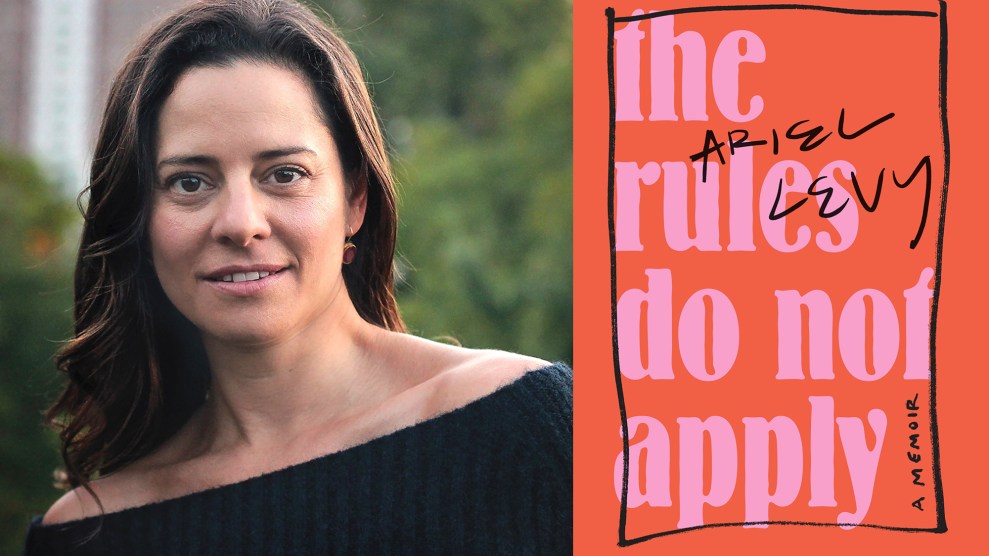 For most of her life, Ariel Levy’s disregard for rules and expectations has mostly paid off. As a child, she preferred adventurous make-believe to playing house. As a young adult, she was determined to write at New York magazine when she was a lowly editorial assistant and became an accomplished magazine writer for such publications as the New York Times, Vogue, and the New Yorker. She fell in love and got the girl, even though the girl was in a relationship with someone else when they met. Eventually, they married. She’s boarded airplanes to places like South Africa in search of characters and returned with stories about gender and athleticism and ways that ignorance and stereotypes can cripple.

But life isn’t simple, and as she moved from her 20s into her late 30s, the rules began to feel a little less negotiable—an experience she records in her riveting new memoir, The Rules Do Not Apply.

“Every morning I wake up, and for a few seconds I’m disoriented, confused as to why I feel grief seeping into my body, and then I remember what has become of my life,” Levy writes in the preface. “I am thunderstruck by feeling at odd times, and then I find myself gripping the kitchen counter, a subway pole, a friend’s body, so I won’t fall over.” Over the course of only a few months when she was 38 years old, Levy lost her spouse and her house to divorce, and her son to a miscarriage. In 2013, Levy wrote about her miscarriage in a powerful New Yorker personal essay called “Thanksgiving in Mongolia.” It’s impossible to read that essay—and the book—without experiencing some of her anguish, as if you’ve stepped outside of your body and into hers. It’s the sort of writing that is vulnerable and vivid, and makes the reader feel brave and desperate in quick succession. “All of my conjuring had led to ruin and death,” she writes in her memoir. “Now I was a wounded witch, wailing in the forest, undone…The wide-open blue forever had spoken: You control nothing.”

Mother Jones caught up with Levy to talk about writing through grief, the politics of miscarriage, and what it means to be an animal woman.

Mother Jones: Let’s talk about “Thanksgiving in Mongolia.” How did you decide to write about that experience in the first place?

Ariel Levy: It wasn’t really a decision. It just sort of came out of my fingers, you know? There were fewer choices involved than in anything I’ve ever written before—it just kind of happened. I honestly don’t think I’ve ever had a piece like that before in my life where there was not a lot of effort; there were not a lot of choices; there was not a lot of moving things around. It just came out of my fingers. I just said what I had to say, basically. It’s not usually like that. Usually it’s a lot of work. Usually it’s a pain in the drain. It just happened.

MJ: So it just felt like something you needed to write about?

AL: Yeah. I guess I needed to, because it wasn’t a conscious choice. The book is a different matter—the book is a conscious choice, and the book was work. It did involve making lots and lots of decisions, and doing lots and lots of revisions. “Thanksgiving in Mongolia” was not like that. I felt like I had said exactly what I meant to say. It’s not usually like that for me. Normally, it’s kind of what I want to say, you know, it’s sort of what I want to say, but it’s never quite everything I hoped. With that piece, I didn’t have any hope. I was like, “Yeah, I mean every word of that.” Unfortunately, it only happened once in 20 years. I’m not going to get too used to it. [The book] was, in many ways, a pleasurable process. It was a normal writing experience that involved decision-making and revision, and some struggle, like anything. Much, much easier than my first book, which was like a total uphill slog.

MJ: I’m sort of surprised to hear you say that—the writing comes across as such raw emotion.

AL: Well, the fact of the matter is, I was doing that anyway. That process of looking at what has happened and what I had done in various ways was difficult, but writing about it wasn’t painful. Feeling suffering is painful, obviously, but writing about suffering, I did not find unpleasant. Usually I don’t write about myself; I write about other people. When you’re reporting, you’re trying to put together the truth based on what lots of different people tell you. Maybe you’re there for some of it because you’re reporting scenes, but at the end of the day, you’re trying to piece together reality from various sources. It’s not like I know the ultimate truth, but I know what was true to me. I found the exercise of trying to express that as precisely as possible sort of thrilling.

MJ: So how did you decide to write the story of your miscarriage as a book?

AL: I don’t know. If this was someone else’s story, I would have wanted to tell it. I would have thought, “Well first of all, that’s a good story, and second of all, it involves lots of stuff that I’m interested in.” Why is it disqualified just because it’s my story, and I know every single thing about it? That shouldn’t be a mark against it. Maybe that should be a mark for it, is what I ultimately decided. Obviously personal life is complicated, but I decided to do it anyway.

MJ: So does that mean you’re feeling good about the book coming out?

AL: I feel partly good about it, let’s say.

MJ: How did the people in your life react to the idea of your memoir?

AL: Really generously. My former spouse is the first person who read it before I turned it in. I was like, “Okay, if there’s anything you can’t live with, let me know and I’ll take it out.” She’s more important to me than any book. Characteristically generous, she was like, “You know what? I’m not going to censor you. This is your story—you tell it how you want to tell it.”

Which is incredible, but also not surprising if you know her. She was the only one I was concerned about. My parents, you know, that’s ancient history.

MJ: Miscarriage is sometimes regarded as this personal, private thing. When women come forward and speak about it, it becomes political. Do you see yourself normalizing the spectrum of pregnancy outcomes by writing about your experience?

AL: Certainly hearing from lots and lots of women who had lost babies, lost pregnancies, and also some women who’d lost children, made me feel good about writing about some of these issues. I feel that the dramatic experience of being a human female animal hasn’t really been a major subject for art and literature. Why shouldn’t it be? It affects half the population. Not that every woman is going to get pregnant or have a child or lose a child, but at some point in her life every woman will have some drama around menstruation, pregnancy, childbearing, childbirth, menopause, something to do with that animal fear.

MJ: Do you feel like there’s a stigma of blame around miscarriage?

AL: Well it’s also a biological experience, right? When you lose a pregnancy like that—especially if you are late term, as I was—you’re going through an enormous let down of all these hormones. If things go well, you’ve got a baby to take care of, so that serves as this counterbalance to this enormous physical, hormonal shitshow. If the baby dies, then you’re in a pretty dark place. Sure it’s cultural, but it’s not just cultural. It’s also physical. It’s pretty hard not to blame yourself and feel terrible in 800 ways when you’re going through that physical experience. Your body’s producing milk for a baby who’s not there. I don’t see a way that you’d avoid going to a pretty dark place in that condition.

MJ: The book is, in some ways, a meditation on womanhood and what it means to have the power to reproduce. Can you talk a little bit about what that has meant to you and then how it has evolved since your pregnancy?

AL: Before I had that experience, I wouldn’t have understood what it entailed. I think if someone said to me, “Oh, this person had a late-term miscarriage, this person went into premature labor,” I would’ve had no sense of what that meant. I think sometimes people will [assume] women will know what this is all about. I don’t even think it’s fair to ask women to know what it’s about if they haven’t experienced that. I certainly didn’t understand the emotional experience of pregnancy and birth. It just wouldn’t have resonated for me.

MJ: What advice would you give someone who is dealing with this kind of loss?