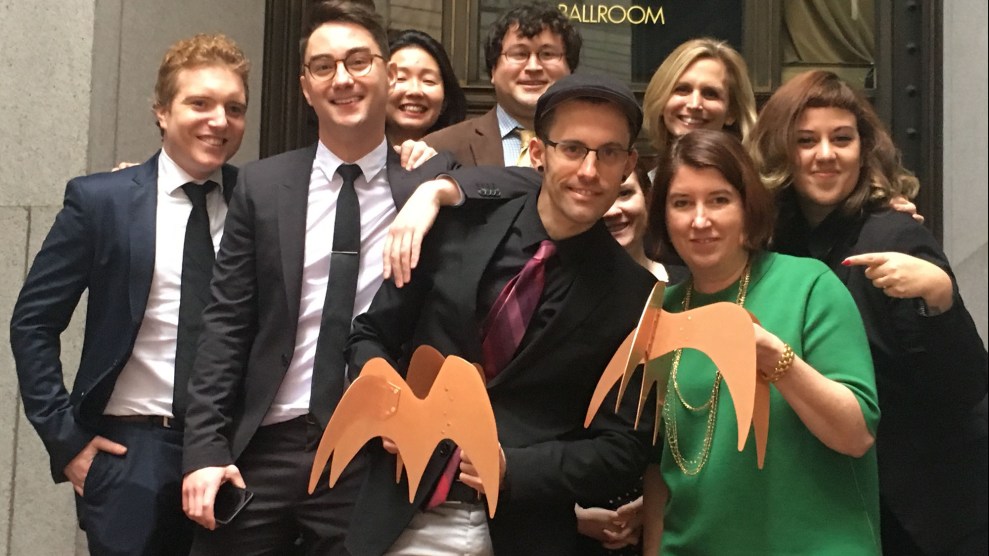 The past year was pretty incredible for Mother Jones—from publishing a massive investigation on private prisons to breaking the story of a veteran spy’s allegations that Russia had sought to compromise Donald Trump, to launching a new model for investigative reporting on a foundation of reader support. Today, those breakthroughs and more were honored with the most prestigious award in the magazine industry, the 2017 Magazine of the Year award from the American Society of Magazine Editors (ASME). MoJo also took home the award for Best Reporting for Shane Bauer’s “My Four Months as a Private Prison Guard,” and we were a finalist in the General Excellence category.

Mother Jones is the bravest, toughest magazine there is, and with the best Editor, too. Mazel Tov, @ClaraJeffery! https://t.co/KZUuaTVMpP

This was the first year Mother Jones was nominated for Magazine of the Year—our industry’s equivalent of the Best Picture Oscar—alongside The New Yorker, New York, Cosmopolitan, and California Sunday. Judges recognized our work on the most important political stories of the year, including Trump’s conflicts of interest, his ties to white nationalism, and the Russia memos, along with myriad investigative and immersive narratives, dramatically increased traffic and visibility, and a widely acclaimed redesign of our website and print magazine.

“Holy shit,” as our editor-in-chief, Clara Jeffery, put it in accepting the award, adding that she was “super proud of our entire team.” The recognition comes at an especially important time, she said, when “the media is under attack. Whether we are magazines that specialize in news and politics, or whether we are magazines that delight and distract, we are going to need both. I really hope we all stick together in the time to come.”

(Needless to say, at MoJo we plan to double down against attacks on freedom of the press and democracy as a whole. If you’d like to help support unrelenting investigative reporting, subscribe here or donate here.) And if you already do—or if you’re part of the MoJo community in other ways, as a frequent reader, sharer, or cheerleader, or as someone who uses our journalism to change the world: THANK YOU. MoJo is unique because we rely on users, not advertisers or deep-pocketed interests, to make our work possible. This award belongs to you.

Here’s what it looked like when Clara and the MoJo delegation learned the news at the awards ceremony: