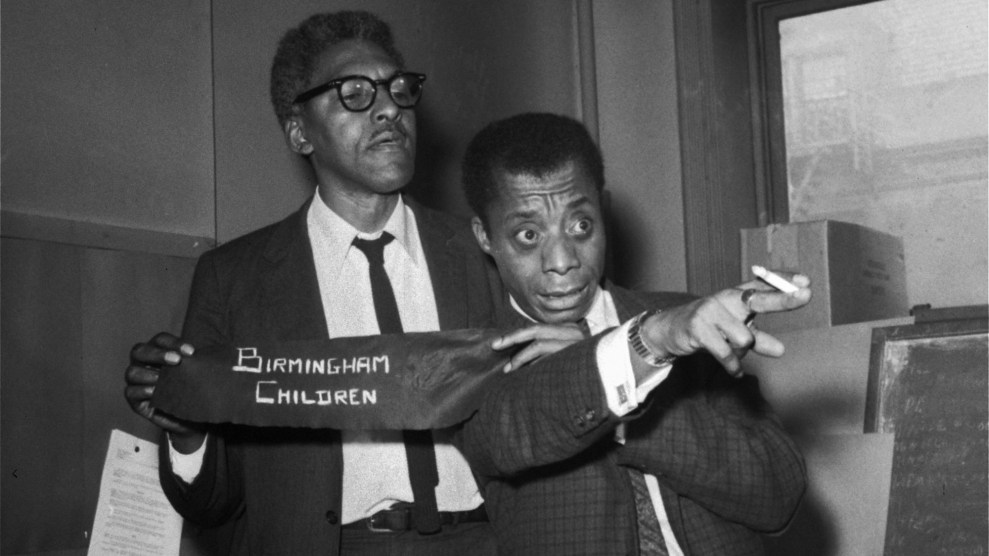 In the eyes of filmmaker Raoul Peck, the voice of author James Baldwin has been largely forgotten in the 30 years since his death. Yet Baldwin’s words remain uniquely relevant today.

I Am Not Your Negro, Peck’s Oscar-nominated documentary, which hits selected theaters this week, recounts Baldwin’s incisive examination of the systemic racism that underpins the black American experience. The film—based on letters, published work, and notes from Remember This House, Baldwin’s unpublished manuscript about his contemporaries Medger Evers, Malcolm X, and Martin Luther King Jr.—also serves as a critique on how Hollywood has clouded the bitter reality that African Americans faced in their struggle for civil rights.

Peck, a Haitian-born director whose previous work includes Lumumba (a biopic of Congolese leader Patrice Lumumba) and Fatal Assistance (a film about Haiti’s efforts to rebuild after its devastating 2010 earthquake), spent a decade working on I Am Not Your Negro. He wrote Baldwin’s estate asking for permission to the intellectual’s archives. One day, during the course of his team’s research, Baldwin’s sister Gloria Karefa-Smart handed him pages of notes from Remember This House. “For a filmmaker, it was like almost a mystery book. I knew I could build on that,” Peck told me.

What unfolds in the film, over the course of 90 minutes, is a revival of Baldwin’s decades-old meditation on race in America, whose fraught history—given the rise of white nationalism in parallel with the Black Lives Matter movement—is no less poignant today. I caught up with Peck to discuss Baldwin’s legacy, the absurdity of Twitter, and how Hollywood has twisted our view of race.

Mother Jones: What drew you to this project?

Raoul Peck: I decided to go back to Baldwin because of the role he played in my whole life [and] because we have forgotten about him. I felt that the world, and in particular this country, were going in circles. What had happened 40 or 50 years ago was happening again, but even in a worse form—that we were sinking into a lot of ignorance and a lot of superficial change.

It was really always about bringing back Baldwin’s words in all their rawness, in all their impact—in the way he analyzes not only this country but also the history of this country, the images that this country is fabricating through Hollywood, and what consequence that has in our imagination.

MJ: How did Baldwin influence your life?

RP: Don’t forget: In the ’70s, when I was a young man, there were not many authors as a black young man where you felt at home, where you felt he’s really speaking about my life and my story. Baldwin was a revelation for me, the kind of revelation that follows you all your life because you can go back to it. It’s not just about stories. It’s about philosophy. It’s about criticizing the world. It’s about deconstructing the world around you. Baldwin explained that you have your own history, and that you cannot be responsible, for example, for slavery. You cannot be responsible for Jim Crow. You can not be responsible for racism. This is much more a problem for the person exercising racism.

You are confronted with the reality of racism when you go in the streets, when the eyes of others come upon you. Baldwin goes back with you to all the experiences you went through and gives a name to them, and explains why it is like this. It’s not because of you—it’s because of them. This is a powerful thing for a young mind. Which brings us to today. Can you imagine in 2016 there is a discussion about #OscarsSoWhite? Is it a novelty we’ve just discovered that the whole production machine is dominated by only one type of human being, excluding women, excluding gays, excluding minorities? This is not new. So why would anything change that has not been changed since the existence of cinema? Baldwin somehow wakes you up to reality. It takes you out of the dream—or out of the nightmare.

MJ: What influence would you say Hollywood has had in shaping how we think about race?

RP: [Baldwin] basically shows you how! From a young age, he’s watching all those different films. He’s watching John Wayne killing off the Indians. He came to the point that the Indians were him. You had to educate yourself because the movies were not educating you. The movies were giving you a reflection of you that was not the truth. That’s the trick. The movie was also giving a reflection of what the country is. Basically, a country that wanted itself to be innocent. That’s the ambivalence of Hollywood. It thinks of itself of selling one thing but it doesn’t see that, by doing that, it is also selling something else.

Baldwin “was one of greatest intellectuals of his time. He was an important voice, period, not an important black voice.”

Your job as a critic is to question that. Otherwise, you’re just part of the machine. Baldwin looks you in the eyes and says, “You are part of the problem. What do you choose to do?”

We are in it together whether you like it or not. It’s the same history. You can choose to not see the whole of it, or to see one particular aspect of it, but it’s your own delusion. You can’t erase the reality of this country.

MJ: What was Baldwin’s role during the civil rights movement?

RP: Baldwin was a celebrity. A TV show like Kenneth Clark could put him aside of Martin Luther King Jr. and Malcolm X. He was, at least, one of the three most important spokesmen of the movement and of the black community. He was one of greatest intellectuals of his time. He was an important voice, period, not an important black voice. Over the years, he disappeared—like a lot of our leaders disappear. He was not assassinated, but somehow he went through those assassinations as if it was himself. I think that broke him as well. You could see that in the way he carried himself in the film. He doesn’t take anything lightly.

Today, I don’t even think that people like him are possible. He would not have that much room. The system gives you two minutes to phrase a whole history. Take the example of the current president. He tells you something in two or three sentences. Then you have maybe 30 seconds to respond. You already lost because every single word of what he said is either false or not correctly accurate. You would spend the next hour to deconstruct what he just said before you can even start telling your own opinion on that. It’s the rhetorical battle that you can not win.

Baldwin would have been extremely complicated today because he would not have 40 minutes like he had at the Dick Cavett Show. It says something about our current situation where we are so bombarded with items, with data, with pseudo-information that you don’t even have the time to seek through it to see what is important, what is not, what is fake, what is real. You need to react. That’s the absurdity of Twitter. You can react without thinking now. Your tweet is as important as if you would have written a Ph.D. [dissertation] on the subject.

MJ: What do you see as Baldwin’s significance as we transition from Barack Obama to Donald Trump?

It’s never about one individual capable of changing everything. It’s about us, every one of us—whether white or black or Latino or women or men. It’s about how you get together and have a sufficiently wide spectrum of citizens who are ready, who have the same diagnostic, or at least who agree on the minimum of the diagnostic and decide to change it.

We have to change it on the basis of reality, not on the basis of what you think is reality—which is based on your ignorance. It’s incredible because we actually have [a president] who is denying the existence of science, who relies on hearsay. Anybody who has zero credibility and tells him something that he feels could be true through his own prejudice, he just decides that it’s the truth. It doesn’t count that you’ve worked 40 years of your life on the very subject, that you have measured that problem, you have statistics about that problem, you have numbers and facts. All this doesn’t mean anything. That’s the bottom of ignorance right there. That’s the world we are in. Baldwin is needed even more today because he helps you focus to the essential, to what is important.