Mahalia Jackson
Moving On Up a Little Higher
Shanachie 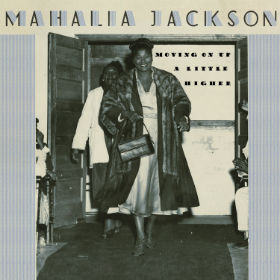 More that 40 years after her passing, the great gospel singer Mahalia Jackson continues to amaze. Her big, passionate, and boundless voice is a wonder of nature that can elevate the spirit of believers and nonbelievers alike. Collecting 22 previously unreleased performances from 1946 to 1957, Moving On Up a Little Higher is a fine introduction for new fans and a treat for longtime admirers. Unleashing her titanic talents with minimal accompaniment, or singing a capella, Jackson revisits her classic “Move On Up a Little Higher” and elsewhere teams with gospel pioneer Thomas A. Dorsey on their only known recording together; other highlights include the tender “His Eye Is on the Sparrow” and the window-rattling “I’m Going to Live the Life I Sing About in My Song.” Settings vary from intimate church gatherings to big events like the Newport Jazz Festival, and sound quality ranges from sparkling to adequate (though still listenable), but it’s all wonderful.

“Didn’t It Rain,” a toe-tapping highlight of Moving On Up a Little Higher, also appears on The Great Television Performances, collecting 16 newly released tracks from 1961. This exhilarating set captures Jackson at her most polished and accessible, backed by an efficient small group that includes jazz greats Barney Kessel (guitar) and Shelley Manne (drums). Reaching out to listeners who may not have known about, or cared about, gospel per se, she shows how sacred music helped shaped the sounds of R&B and rock’n’roll. Hallelujah!