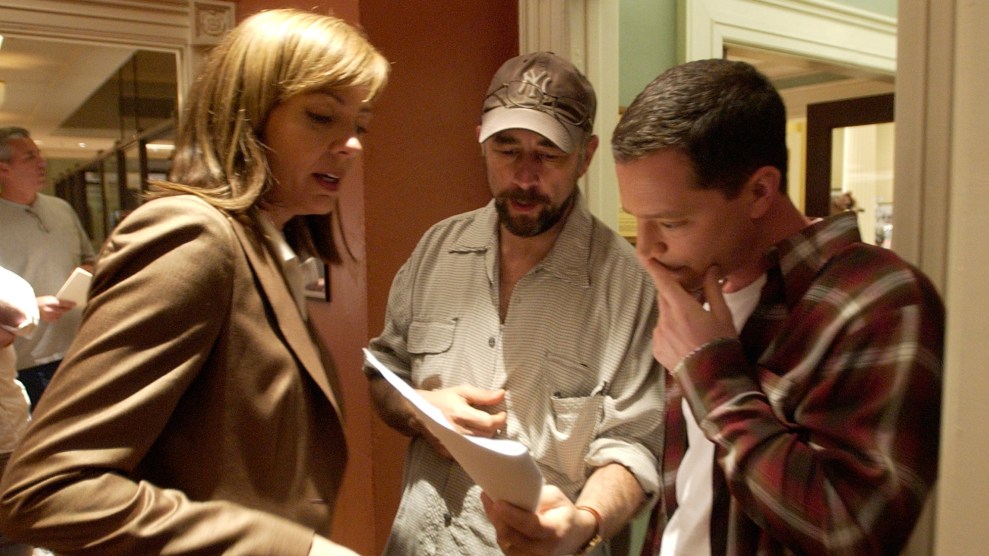 Before the dark drama of House of Cards and the political satire of Veep, there was The West Wing, the beloved NBC White House drama that aired 154 episodes over seven seasons, beginning in 1999. For the past six months, Song Exploder host Hrishikesh Hirway and West Wing actor Joshua Malina have been reliving The West Wing in podcast form, usually one episode per week.

For a generation of political junkies, The West Wing delivered an idealistic fictional view of what Washington could accomplish. A Democratic president with a professorial demeanor confronts Republican opposition, while the president’s gang of ambitious, idealistic staffers navigates the inner workings of Capitol Hill and the presidency. A decade after it ended, the show still feels relevant.

“Hrishikesh is the superfan and probably the smarter of the two of us. It’s like the Beatles…I’ll be the cute one!”

The relationship that begat The West Wing Weekly podcast began with an email. Back in 2001, Hirway was looking for advice on how to break into the entertainment industry. He reached out to Malina, a fellow Yale alum. The two kept in touch over the years, eventually collaborating on an ill-fated TV project. Hirway would later hit podcast gold with Song Exploder, wherein he and a guest musician completely deconstruct one of that artist’s songs. In September, after a guest appearance on Gilmore Guys—a podcast in which two guys hash out each episode of Gilmore Girls—Hirway got to thinking: Why not do the same with The West Wing? He reached out to Malina, who currently plays Attorney General David Rosen on ABC’s Scandal.

As Hirway saw it, The West Wing, which snagged more than two dozen Emmys over the years—merited discussion not only about how each episode came together, but also about the ideas it espoused. Would his friend join him?

Malina was reluctant at first. After four seasons as White House official Will Bailey, Malina hadn’t returned to the show since it ended. But after talking to Hirway, he went back and watched the pilot episode. He was hooked. It’s “one of the great pilots,” Malina told me, and ripe for exploration. “Hrishikesh is the superfan and probably the smarter of the two of us. It’s like the Beatles—you have the cute one…” he added. “I’ll be the cute one!” 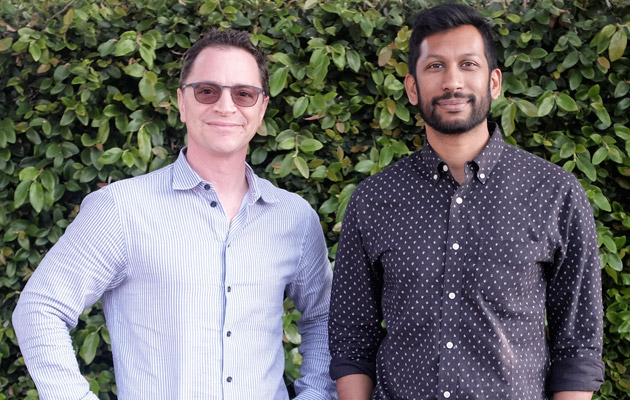 Thanks in part to Malina’s Hollywood connections, West Wing Weekly is well stocked with special guests, from former cast members, directors, and writers to real-life political insiders. The podcast goes well beyond the play-by-play recap, enriching listeners’ binge-rewatching experience with the stories behind the episodes. During the recently wrapped first season, West Wing Weekly was downloaded more than 5 million times—it took Song Exploder a year and a half to hit that mark. Six more seasons is a long haul, to be sure, but Malina and Hirway insist they’re all in. Assuming they stick to a weekly schedule, the podcast will wrap up sometime in the spring of 2019.

With the second season just commencing, we spoke to Malina and Hirway about The West Wing‘s lasting influence, things that Barack Obama and Martin Sheen’s Josiah Barlet have in common, and how the show’s mastermind, Aaron Sorkin, might have written the rise of Donald Trump—or not.

Mother Jones: How would you say The West Wing holds up today?

Joshua Malina: The issues are certainly evergreen. Aaron writes a storyline 17 years ago—somebody hopped the fence and tried to make it into the White House—and it happens three days ago. It’s very topical. The show is generally perceived as an antidote to the Bush years, although it had a big audience on the left and the right. Eli Attie, a West Wing writer and producer, was a speechwriter in the Clinton administration and ultimately Al Gore’s chief speechwriter. I remember asking him: Did he think the show was realistic? I reiterated that a lot of viewers saw it as this liberal fantasy camp. He said, “It’s absolutely my experience that the great majority of people who go into politics and work in our government were drawn to it for all the right reasons, and their day-to-day lives reflect a dedication to making the country a better place.”

Hrishikesh Hirway: I think it holds up brilliantly—I don’t think that there’s anything [that doesn’t], except for a few moments about inclusion and technology. It’s rare that the show feels outdated. There is a Democratic president but a Republican-controlled Congress. A lot of the conflict that comes up is because of that dynamic, that it’s difficult to govern. It’s not like they can go all out on a massive legislative overhaul. They are always kept in check by the other branch. Sometimes that’s incredibly petty and partisan and divisive, just for the sake of politics—and that, of course, has been really relevant to the entire tenure of the Obama administration. It’s a workplace dramedy about friendship and the family that you create with the people that you work with, people who are smart and dedicated and passionate. I don’t think those ideas or themes have an expiration date.

The Trump campaign “would’ve been too over-the-top and cartoonish to fit within any kind of West Wing universe.”

MJ: How might the show’s writers have fictionalized a Trump presidency?

JM: [Groans.] I groan even at the phrase.

JM: The three-ring circus we are being treated to may be best handled by the people who make Veep. Can you even treat seriously what we’re seeing on a daily basis from the Trump campaign? I’d love to see what Aaron Sorkin would’ve done with this, but it’s certainly beyond my conception.

HH: I think it would’ve been too over-the-top and cartoonish to fit within any kind of West Wing universe. It would be like saying, “How would the West Wing have handled the Age of Ultron plot line?” or something like that. It would be more like, “How would George Orwell handle the Trump presidency?”

MJ: Hrishikesh, you told me President Obama was Bartletesque, while his first deputy communications director, Sam Seaborn, was like Justin Trudeau. How so?

HH: They’re both extremely academic—they’re scholarly presidents. They’re kind of saddled by trying not to rock the boat too much. Obama, especially in his first term, went to the middle in a way that was surprising to the people who were really excited to vote for him and inspired by the things that he said. It’s disappointing, but it also makes sense given the Congress he was up against, and just needing to deal with the recession. He couldn’t come out of the gate with the same kind of fire that had ignited the campaign.

In the first season of The West Wing, you see the same exact thing happening in the Bartlet administration. They keep running up against the wall and then compromising their lofty ideals, or sabotaging them for the sake of pragmatism. Finally, about a year and a half in, they realize this is not a winning strategy, and it’s more important to govern in the time that they have rather than make sure they’re safe enough to be reelected. That happened in the second term with Obama—he was able to bring back some of the idealism of the campaign.

“New people are discovering West Wing every day. People are inspired by its vision of Washington—it’s a rare thing in television.”

MJ: What about the Trudeau comparison?

HH: You know, he’s young and handsome. He’s our dreamboat head of state. I think he really has lifted people up in a way that you get when you listen to Sam Seaborn speak. If The West Wing is a fantasy for capable, smart, thinking people, then Seaborn distills a lot of that when you hear him talk about education or space exploration. He gets some of the best monologues, when he’s trying to passionately argue a point. Some of that rhetoric has echoes in some of the speeches Trudeau has made. You combine that with how good he looks in a suit and—I don’t know, the comparison kind of makes itself.

MJ: Why do you think The West Wing still resonates?

JM: It’s a variety of things: great writing, great dialogue, engaging characters, a terrific cast. The secret sauce is the presentation of the American government in a more positive light than we’re used to seeing it. At a pre-prom party, [my daughter] Izzy came up to me and said, “Oh, this is my friend. Her date wanted to meet you.” The date is a young guy who’s interested in poli-sci. There are young people who have been absolutely inspired by watching The West Wing, and he was maybe just born when it premiered. It makes me very happy. The audience is always increasing because new people are discovering the show every day. People are inspired by its vision of Washington—it’s a rare thing in television.

HH: The show is so beloved. People like me love it enough to want to spend three years talking about it! I guess I shouldn’t have been so surprised that there would be a lot of people that enjoy having this in-depth experience. All the things that motivate me to want to make the podcast would potentially appeal to somebody who wanted to listen to it. At its heyday, The West Wing had 18 million viewers. The compass for making this podcast is to try as much as possible to honor the spirit of The West Wing—to be fun and funny, but also a little bit thought-provoking—more than a piece of entertainment, but a chance to engage with some aspects of civic duty as well. Or rather, to be able to reflect on how things work in the real world. I want to do the show justice. It’s a high bar. I don’t feel confident that we’re doing that with our goofy chats, but it’s a nice goal.