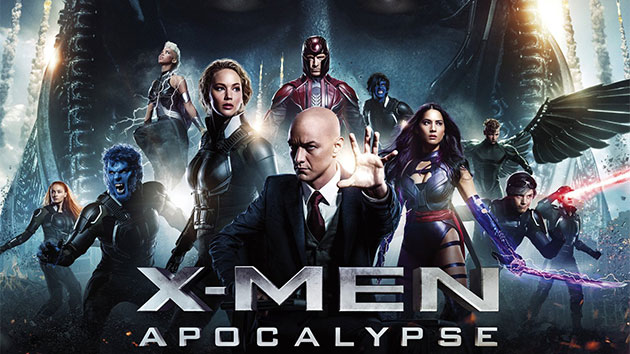 Depending on your definition, there have been somewhere between 50 and 70 superhero films made in the United States since the first X-Men came out in 2000.

When X-Men: Apocalypse, the ninth entry in the franchise and the fourth helmed by Bryan Singer, is released on May 27, it will be the fourth major superhero film to debut just this year. It will also be the best. Better than Captain America: Civil War, which was itself better than Batman v Superman: Dawn of Justice. (Deadpool was sort of a different bird, and if you really were taken by its shtick then you might prefer it.)

That’s not to say Apocalypse is perfect. Like all these films, the plot doesn’t make a lot of sense. It is also a profoundly long 144 minutes. And like the bloated Batman v Superman and Captain America: Civil War, it is overstuffed with superheroes who less serve the story so much as are contractually obligated to appear within it. X-Men: First Class became a hit in 2011 just as Michael Fassbender and Jennifer Lawrence were becoming A-listers, and though their talent, along with that of James McAvoy, shines in the new film, the plot struggles with the obligation to share screen time between so many stars.

Do you want to know about the plot?

In Ancient Egypt, Oscar Isaac is a powerful mutant who is betrayed by some followers and ends up buried inside the ruins of a pyramid. Cut to 1983 and, following the events of X-Men: Days of Future Past, the younger versions of the X-Men are scattered across the globe doing things that are not really worth getting into. Oscar Isaac is woken up by some cult that knows about him based on hieroglyphics or something. (Don’t worry about them. They are never mentioned ever again. I’m pretty sure they die? It really doesn’t matter.) Isaac quickly begins assembling a small band of mutants to help him destroy the world. You see, Oscar Isaac was the very first mutant, and his power is basically that he can take over the body of another mutant and, voila, he’s got that mutant’s power. So for millions of years he has been jumping from mutant to mutant collecting powers (except for the last 6,000 years when he was asleep under that pyramid). He has many powers, but his favorite seems to be turning people into sand.

Oscar Isaac finds Storm (Alexandra Shipp), a mutant with a lightsaber whip (Olivia Munn), and some alcoholic with angel wings (Ben Hardy) and convinces them to help him kill everyone in the world so that he can…[mutters incoherently].

Meanwhile, Magneto (Michael Fassbender) is the most-wanted fugitive in the world and is hiding in Poland with his wife and daughter, like you do. But then some bad shit happens to this tranquil trio involving…wood, and one thing leads to another.

You see where this is going? Oscar Isaac and his “four horsemen of the Apocalypse” are going to fight Jennifer Lawrence and James McAvoy and the X-Men. However, it takes a very long time for this fight to actually happen. For a superhero movie, this is not the most action-packed film! If you want straight wall-to-wall, mutant-on-mutant action, then it will disappoint. It’s not A Room With a View With a Staircase and a Pond but it’s not A Room With a View of Hell: Staircase of Satan: Pond of Death.

Watching it, however, does not disappoint. The people who made this movie seem to genuinely care about entertaining the audience in every scene. You may rightfully wonder why the scenes happen in the order that they do or why they focus on what they focus on, but they are enjoyable. The cast deserves credit for this. The screenwriters deserve credit, too. The producers deserve credit. Most of all, though, director Bryan Singer deserves credit.

My overriding thought walking out of the screening was: Bryan Singer is just a better director than the other people directing the current crop of superhero films. The Russo brothers of Captain America: Civil War and other various Marvel installments are great! Even Zack Snyder is a talented director whose main flaws come out mostly when he is allowed to have control over other aspects of a project. But Singer’s direction is more confident, more inventive, and more fun.

The X-Men movies don’t get the ink of other superhero movies, but they are the most valuable players of the genre. Aside from X-Men: The Last Stand and X-Men Origins: Wolverine—the former now the butt of a joke in Apocalypse; the latter the world has agreed to pretend never happened—the franchise has been remarkably consistent.

And while it isn’t entirely clear what’s next for the flagship series in the franchise, there are roughly 1,000 other films in the X-Men universe being developed, from standalone Wolverine, Deadpool, and Gambit films to Josh Boone’s New Mutants spin-off and a rumored Deadpool-esque R-rated X-Force.

Go see X-Men: Apocalypse because it is good and fun and, in a world with an unavoidable number of superhero films that are a total slog, that is fun and good.