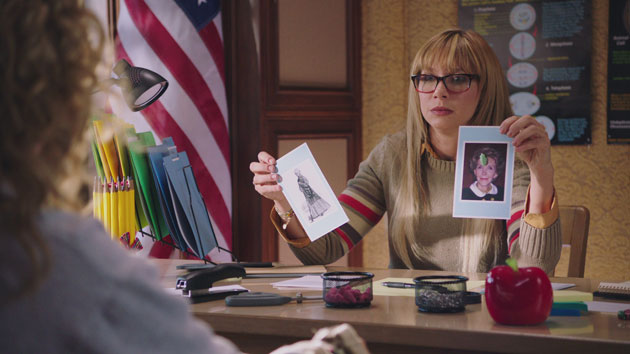 Tonight marks the premiere of Comedy Central’s Idiotsitter, the creative love child of comedians Jillian Bell and Charlotte Newhouse, longtime writing partners and pals who met while performing with well-known Los Angeles improv troupe the Groundlings. Bell, the more established of the pair, has written for SNL and juggled various acting roles, notably playing Jillian Belk, the weird but loveable co-worker of Adam DeMamp (Adam DeVine) on the TV show Workaholics. She’s also had solid parts in recent films including The Night Before and 22 Jump Street—in which she unloads a relentless stream of ageist insults on Jonah Hill, an undercover cop trying to pass as a college student.

Idiotsitter, which began as a 2014 web series and was been picked up for a 10-episode season, follows the odd couple of Billie (Newhouse) and Gene (Bell)—get the reference? Billie is a cash-strapped Harvard grad who answers an ad to babysit a seven-year-old—who turns out to be a 20-something party animal whose father decided she needs a caretaker during her house arrest.

The pilot, which includes a wild party, a run-in with the law, and a stolen pony named Ice Cream, delivers on laughs. More hilarity should be forthcoming as Billie helps Gene on the road to recovery and (maybe) a GED certificate, while Gene tries to make Billie less of a narc—starting with a dose of “hoofies”: half horse tranquilizer, half roofie. (You can catch it at 10:30 p.m., just after the season six launch of Workaholics.) I spoke with the duo about gender, Daniel Day-Lewis, and sharing their “little maniac brain.” Watch the trailer, and then we’ll talk.

Mother Jones: What’s the biggest difference between writing for the web versus TV?

Charlotte Newhouse: I think there was much more pressure to write the TV show. Sustainability is an issue. But actually, the web series was maybe at least as hard to get it all crammed into five minutes—

Jillian Bell: To get you to know who these characters are, and their point of view, and what the world looks like: It’s difficult to get that out in five minutes without being so heavy on the exposition.

MJ: Have you found comedy writing and acting to be a boy’s club?

JB: It has been for a while, but we’re seeing this change—I think Bridesmaids did a lot for that. Now we’ve got Amy Schumer and Broad City. And we’re so excited to be on Comedy Central because they’re so wonderful about having female-driven shows that are totally different. This is the first thing that I’ve done where men haven’t been the leads.

“We’re so excited…This is the first thing that I’ve done where men haven’t been the leads.”

CN: There was a great Julieanne Smolinski article, where she says the pressure of the female comedian is not only do you have to be funny, but you have to deal with your sexuality, and sexualize your character.

CN: It was a great commentary. We’re hoping it doesn’t have to be an issue anymore.

MJ: It feels like every week Amy Schumer is saying “Oh my god, stop saying ‘It’s an exciting time for women.’ We aren’t even close yet.”

MJ: Well, is it an exciting time?

MJ: When female comedians are overtly sexual, as Schumer is, they often get knocked for it. Do you struggle walking that line?

JB: In the writers’ room we’re aware of just trying to make it a funny show and trying not to worry too much on “Would women do this? Would women not do this?” It was important for us to just say, “Does this make us laugh?”

MJ: Do you guys ever find yourselves writing for a certain demographic? For instance, leaning toward guy humor because you’re writing for Comedy Central?

CN: The nice part about having a writing partner is you don’t have to envision this invisible audience. If it makes your partner laugh and it makes you laugh, then you put it down on paper.

MJ: What is something you’d like to see from fellow women comedy writers?

JB: I hope that men and women just start thinking a little bit more outside the box. Not every woman has to play someone who is worried because they’re not in a relationship, or is pregnant, or is a wife. There are so many different types of roles for women.

MJ: Who are your writing inspirations?

JB: Charlotte has a good answer.

CN: I love the Coen Brothers. Contemporary writers? Zoe Jarman and Sarah Peters wrote Master of None. That was so good.

MJ: Yes, it makes you laugh—and think, too.

MJ: How did Idiotsitter come about in the first place?

CN: We actually wrote it first as a 30-page TV pilot. So we had the bones of the premiere already written. That was actually the first thing we wrote together that wasn’t a sketch for Groundlings. If we had to shoot it ourselves we wanted it to be cheap, so the first thing we thought of was, “Well, what can we do on location? Then we thought of house arrest and everything else kind of came from there.

MJ: So Gene is this adult child who’s very good at partying whereas Billie is well educated but doesn’t seem to have her act together.

JB: Thank you for noticing that, because not a lot of people get that.

JB: Yeah, a lot of people assume that there’s a wacky character and a straight man, and that’s the opposite of the show we wanted to make. 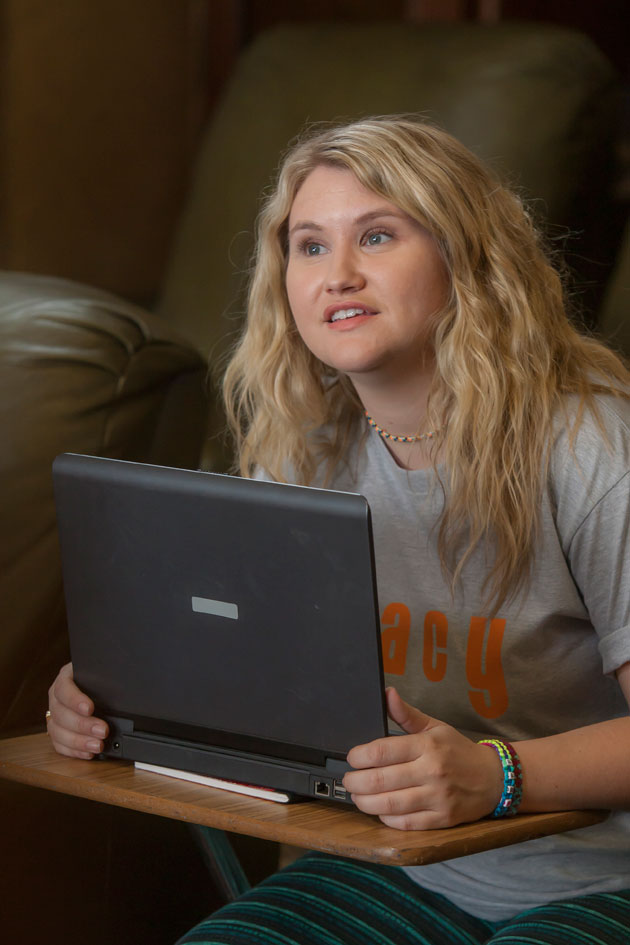 MJ: Was Gene supposed to be a critique of Millennials, or of people whose parents did everything for them and now they can’t function on their own?

“For us, it was more about creating two characters that saw each other as deficient and thought it was their job to make the other better.”

CN: I don’t think we were ever trying to critique Millennials. She’s definitely a child of privilege, someone who’s never had to become an adult. But it’s more like Peter Pan syndrome. You know, people who can’t quite accept that they have to make that transition. It’s obviously what Billie thinks of Gene, and Gene thinks Billie is this very sheltered girl who hasn’t partied, has no experience with men—and [Gene] needs to bring that out of her. For us, it was more about creating two characters that saw each other as deficient and thought it was their job to make the other better.

MJ: Who inspired these characters?

JB: If any of this had happened in real life, we would be in a lot more therapy. But the characters yes, very much so. Charlotte definitely has a side of her that was very Gene, especially when she was a kid: You were totally a partier. I was actually very uptight.

CN: Well, you had a corruptibility that was kind of fun.

MJ: How did you two end up working together?

JB: Charlotte was in the main company at the Groundlings before me, and then I got in and we decided to do the holiday show together. We wrote one sketch, and in that moment we were like, “Oh, you’re my writing partner for the rest of my life.” It just worked. We shared this weird little maniac brain, and we’re on the same page about almost everything. And we’re very different people.

“I was like, ‘This cool chick is not going to want to hang out with me.’ Either I got more cool, or she got less cool.”

JB: We don’t have the same palette. Anything that she likes to eat, she’s like, “I’ll just get you the opposite.”

CN: If I find something on the menu and think, ‘I would never order that,’ I order it for Jillian.

JB: We have totally different tastes in music, somewhat in movies. But I feel like we like the same TV shows. And we have the same taste in men. [Laughs.]

CN: But our comedic voice is so similar. As soon as I saw Jillian [perform], I was like, “Oh God, I have to work with this woman.”

JB: I was the same way for Charlotte. She would just play the weirdest women. Sort of horrible, terrible women that didn’t have their lives together. Before I got into the main company, I was like, “This cool chick is not going to want to hang out with me.” Either I got more cool, or she got less cool. And thank god!

MJ: Does your friendship ever clash with your professional relationship?

JB: It never bleeds into it.

CN: And we’re pretty respectful of each other’s opinions. We’ll argue, and whoever argues longer wins!

MJ: If this show takes off, whom would you like to bring in as guest stars?

CN: Just from the Groundlings we know so many talented, funny people—we got to cast some of them. It’s great to have this group you can draw from, and draw inspiration from, and write a character around.

JB: He’ll do it! What is he doing right now?