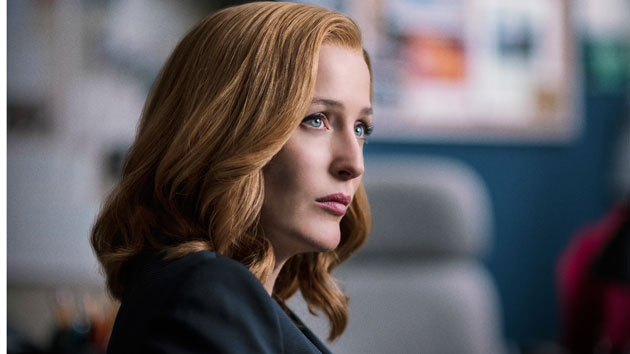 When it comes down to it, actress Gillian Anderson is way more Gibson than Scully.

Or at least Stella Gibson, the no-nonsense detective she portrays on BBC’s The Fall (Dana Scully needs no such introduction), is the character Anderson likes best. In the decade-plus since The X-Files wrapped up its nine-season, two-movie run, the British-American actress and mum of three has moved on to roles that are more complex and fulfilling than the maddeningly skeptical FBI agent who made Anderson a household name.

Now, of course, she’s returning for the six-episode X-Files reprise that kicks off January 24 on Fox. Although the premiere was widely panned, TV critics promise it gets better: Many are raving about the third episode, which was written by fan favorite Darin Morgan and includes a role for X-Files superfan and Silicon Valley star Kumail Nanjiani.

Once Anderson’s initial tenure as Scully concluded, she moved back to London and did a play in order to “take a breath…It was important for me to remove myself from the intensity of the business as I had experienced it during the show,” she says.

That break was short lived. The British-American actress has been busy ever since, co-starring in dark TV dramas such as The Fall and Hannibal and pursuing numerous other screen and stage projects—if you’re lucky, you can still score tickets for her upcoming stint as Blanche DuBois opposite Ben Foster’s Stanley Kowalski in A Streetcar Named Desire. Anderson also has a role in War and Peace, a new BBC miniseries based on the epic novel, which premiered in the United States on January 18. And while most all of Anderson’s work is pretty great, this interviewer, at least, is overwhelmed with nostalgia for Scully’s signature eye roll. Watch the trailer, and then we’ll talk.

Mother Jones: So, how did you react when you were approached to do The X-Files again?

Gillian Anderson: My initial reaction wasn’t very positive because my experience of doing it before was doing 24 episodes a year! That’s just not feasible with three kids and other commitments. When it appeared that Fox would be willing to do a smaller amount of episodes, I suddenly had a bit more interest in having the conversation.

MJ: Was it difficult to play Scully again after all this time?

“Because I’ve tried really hard to get as far away from Scully as possible…she was a bit further away than I had expected.”

GA: It was natural to a certain degree, in that it’s a little like getting on a bicycle. But because it’s been so long, and because I’ve tried really hard to get as far away from her as possible in the other roles I’ve been playing, she was a bit further away than I had expected.

MJ: How has Scully changed since we last saw her?

GA: She hasn’t really changed that much. They’re no longer on the X-files, so she’s not an active FBI agent. She’s working as a surgeon, and her day-to-day life is pretty simple. She’s refocused.

GA: “Bad Blood,” one of our comedic episodes. It’s been my favorite for a long time. I find it funny. It’s a very effective premise to have the two agents just about on trial for what may or may not be the death of somebody, and they have very different takes on what transpired. The nature of the different perceptions are quite extreme and show a lot about Mulder and Scully’s internal thinking.

MJ: I’ve always been struck by how your character paved the way for more diverse portrayals of women in sci-fi.

MJ: How did your preparation for playing Stella Gibson on The Fall compare with your prep for Scully? I mean, both are investigators, but they’re totally different.

“Stella Gibson is probably my favorite character I’ve ever played. I feel compelled by her in a different way.”

GA: Scully—I don’t know how much proper research I did back then. I didn’t really have time. I got the job on a Thursday and we started shooting the following Monday. At some point, Fox arranged for us to go to the FBI and talk to a couple of agents. I did a lot more work for Stella Gibson to understand the nature of the troubles in Northern Ireland and the British occupation, the police presence in Northern Ireland and the impact that had on the ground, and also what it meant to be detective superintendent.

MJ: I love that The Fall highlights how sexually empowered women are judged by men, even as the male lead is a sexually motivated serial killer.

GA: I felt like I had never read a character like Stella before. There was something extremely enigmatic about her. She’s still a mystery to me, and that’s very unusual. Usually so much information is revealed about characters. But the lack of information matches who she is. It’s a sly way for the writer to lead people on. She continues to be compelling and interesting, even though we don’t know very much about her.

MJ: Do you prefer playing her to playing Scully?

GA: Yeah. She’s probably my favorite character I’ve ever played. I feel compelled by her in a different way. I don’t know how much of that is because I played Scully for such a long time that I appreciate the change of scene. I feel like I identify with Stella more, and I am more curious about where she’s headed.

MJ: She’s complicated, and not hesitant to tell people to fuck off. It’s refreshing to see that in a female TV character.

GA: Yep. Well, I don’t know if we need more women out there to say, “Fuck off!” But television isn’t the issue. There are a lot of female characters on TV who are intelligent, and a good enough portion of them aren’t all about the date and the car and the plastic surgery. It’s in film that it’s lacking! It would be great to see more women in a wider range of characters—and better populated in film.

MJ: It seems like that problem stems from a dearth of female directors and writers.

“Studios don’t believe they’ll have an audience if women make it. A lot of female directors can’t pay somebody to hire them.”

GA: I think there’s a lot of them out there—I just don’t think their material gets made. Studios don’t believe they’ll have an audience if women make it. A lot of female directors can’t pay somebody to hire them.

MJ: Would you say that situation is slowly improving?

GA: [Laughs.] I think it’s stagnant, in a big way. That’s what makes the change difficult. The numbers are astounding.

MJ: Vis-a-vis your upcoming role as Blanche DuBois, what’s the biggest difference for you between stage acting and your work on camera?

GA: You’re doing the same thing over and over [onstage], so one of the biggest challenges—aside from being live in front of an audience—is keeping it fresh and new every night.

GA: She’s one of the most extraordinary and complicated characters ever written. Tennessee Williams is extraordinary—playwright, poet, writer of letters. He was a brilliant man who had a tragic life experience, and his experience dramatically affects the pieces that he created. Blanche got all of his pain. In the South, where the play is set, you don’t show your pain—especially back then. Women are meant to behave in the world, and she’s a victim of that time. I find her an extremely moving and challenging character.

“War and Peace is so beautiful and rich, you really feel like you’re in Russia—even though everyone is speaking with a British accent.”

MJ: Tell me about War and Peace.

GA: This adaptation was done by Andrew Davies [House of Cards], a British writer who has a talent in adapting large novels to screenplays. This is probably one of his best works. It’s directed by Tom Harper, and it’s a massive, massive accomplishment: It’s so beautiful and rich, you really feel like you’re in Russia—even though everyone is speaking with a British accent. [Laughs.] It’s very detailed in the relationships between these families, which was so integral to the story and the history of Russia. It’s got some of the most moving war scenes I’ve ever seen. You really get to care about the characters that are in this story, and that’s quite rare, I think. You have the intimacy of the relationships to invest in. People seem to be liking it in the UK and I hope they like it over here.