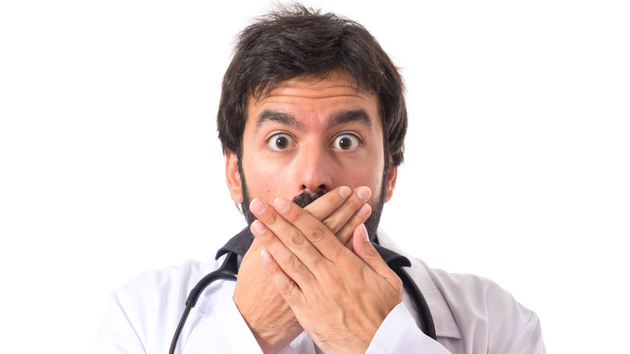 Medical lingo can be confusing—but maybe ignorance is bliss. In his new book, The Secret Language of Doctors, Toronto-based ER physician Brian Goldman decodes the slang that doctors and nurses use to talk about their jobs, patients, and each other—and some of it is far from flattering.

Of course, not all slang is derogatory. In some cases, it’s a way to pack a lot of information into a single phrase, or to warn colleagues about a potentially difficult patient. A surgeon might say “High Five” when entering the OR to let other staff know they’ll be operating on someone with HIV. Sometimes slang helps hospital staff sound more professional during awkward situations; a nurse might refer to “Code Brown” during a miserable shift with a man who is having constant diarrhea in bed. 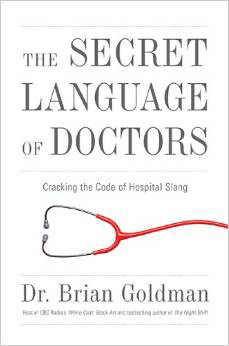 In other situations, the book reveals, slang is therapeutic, a form of comic relief that builds camaraderie between overworked doctors and nurses, and which helps them get through long, emotionally heavy days. “The inability to laugh on rounds in an environment like our ICU, where there’s very little to laugh about, is going [to] be tragic and injurious to safety and to the quality of care,” one respirologist told Goldman. “You need to have those moments where you take a little break and reset.” In any case, check out a selection of lingo below, all pulled from Goldman’s book, so that the next time you’re in the hospital you know what your doctor really thinks of you.

The bunker: This is a room in the hospital where medical students, residents, and their attending physicians meet behind closed doors to rest and talk about their days. There, one might laugh about the patient in the “monkey jacket,” or hospital gown, who had a case of “chandelier syndrome,” practically leaping up toward the ceiling in surprise when she felt the cold stethoscope. A surgeon might cringe while recalling a “peek-and-shriek,” an operation in which she opened a patient’s belly to find something unexpected, like cancer, and quickly stitched up again.

Cowboys and fleas: Doctors don’t only bad-mouth their patients; they also bad-mouth each other. Hospitals are full of rivalries between departments, Goldman writes. Surgeons may be called “cowboys” to imply they operate first and think later, while internists can be criticized as “fleas,” an acronym for “fucking little esoteric assholes,” as one doctor put it. Urologists might take offense at being calling “plumbers,” and anesthesiologists for being referred to as “gas passers.” FOOBA, which means “found on orthopedics barely alive,” is another insult suggesting that orthopedic surgeons successfully fix bones while missing other signs of disease.

Discharged up: After “calling it” and stopping resuscitation efforts, a patient may be “discharged up,” “discharged to heaven,” or sent to the ECU (the “eternal care unit”). Someone who is dying but still holding onto life is “in the departure lounge” or “entering the drain,” and if he can’t be saved he’s “circling the drain,” Goldman writes. Doctors might note the O Sign, when a person is so close to the end that his mouth stays open like the letter O, or the Q Sign, when his tongue sticks out.

DOMA: “Day off, my ass,” when residents aren’t allowed to leave work until noon and have to be back the next day.

FLK: Funny-looking kid, referring to the facial characteristics of a child with a genetic or congenital condition.

Frequent fliers: These are people who show up at the emergency room again and again, even for nonemergency complaints, potentially because they have nowhere else to receive care. Frequent fliers are often homeless people, known as “curly toes,” because their toenails are so long they’ve curled, Goldman writes. If they don’t have insurance, they may suffer from “nonpayoma” or a “negative wallet biopsy.” If they bring a bag with clothes, determined to stay even before receiving a diagnosis, doctors may note with annoyance their “positive suitcase sign” or “positive Samsonite sign,” in reference to the luggage maker. When doctors “turf,” they’re looking for any possible justification to refer a patient to a different department in the hospital, and if that patient is “bounced,” they are returned back to the original department.

GOMER: Made popular by the 1978 satirical novel, The House of God, GOMER is slang for “get out of my emergency room,” for chronic patients who are admitted with tricky conditions that cannot be cured and need long-term care. (Since these patients are often elderly, GOMER can also stand for “grand old man of the emergency room,” Goldman adds.) But actually, this term is passé. “GOMER has been used on TV shows including Scrubs and ER,” he writes. “When that happens, it’s no longer insider slang, so it gets discarded.” Instead, doctors may refer to “status gomaticus,” or to the “bed blockers” who take up space in acute-care hospitals when they really need placement in a rehabilitation or long-term care facility. They may bemoan an elderly patient’s “failure to die,” inspired by the term “failure to thrive,” used for infants who are too small.

Harpooning the whale: Some physicians are not exactly delicate when it comes to describing overweight and obese patients. A surgeon might use the euphemism “excessive soft tissue” to refer to the layers of fat she needs to cut through before reaching the muscle, writes Goldman, or she might say the patient is “fluffy.” OB-GYNs might talk among themselves about “harpooning the whale,” or inserting an epidural catheter, which provides pain-relief medication, into an obese woman’s spinal canal during the late stages of labor. Since it can be tough to locate the insertion point through fat, one hospital even created a “Prince of Whales Award” for the resident who placed epidurals “in the most tonnage in one shift,” Goldman quotes an anesthesiologist as saying. Some doctors may say they charge a “beemer code,” slang for an additional fee to care for an obese patient, maybe one who’s “two clinic units,” or 400 pounds.

Hollywood code: From Grey’s Anatomy or ER you may be familiar with Code Blue—an emergency code indicating that someone needs immediate resuscitation. But sometimes doctors might realize there’s no way to save the patient. In that case, they may call a “Hollywood Code,” also known as “Show Code,” “Light Blue Code,” or “Slow Code.” Rather than dropping everything and sprinting to the patient’s bed, they stroll to the scene, slowly check for a pulse, and begin their intervention, Goldman explains. “It’s a play for time until it’s acceptable to pronounce the patient dead,” he writes.

Incarceritis: The condition of a prisoner who fakes an illness to go to the hospital. If that prisoner is looking for drugs to peddle later to their cellmates, they may have ADD—not attention deficit disorder, but “Acute Dilaudid Deficiency,” with Dilaudid being one of the strongest prescription narcotics. He might try to “cheek” his pills, hiding it in his cheeks while the nurse isn’t looking and then saving it for later sale. Then there are the “swallowers,” people with a mental illness who sometimes swallow objects like forks and nails.

SFU 50 dose: The amount of a sedative or anti-anxiety medication that causes 50 percent of patients to shut the fuck up.

Status dramaticus: In a play on the real medical term “status asthmaticus,” an intense asthma attack that doesn’t respond to an inhaler, doctors have come up with the phrase “status dramaticus” for stressed-out patients who believe they’re extremely sick or dying but actually aren’t. Patients who exaggerate their symptoms, acting like they’re in pain to get a response,  are “dying swans,” an allusion to a 1905 ballet, The Dying Swan. Or they’re “a Camille,” like the heroine who passes away with great drama in her lover’s arms during La Dame Aux Camélias, by Alexandre Dumas.

Whiney primey: A pregnant woman who keeps returning to the hospital because she thinks she’s in labor but isn’t. When the baby comes, she’ll be “frozen” when she receives an epidural for her pain, and if the epidural stops active labor she’ll become an “ice cube.”