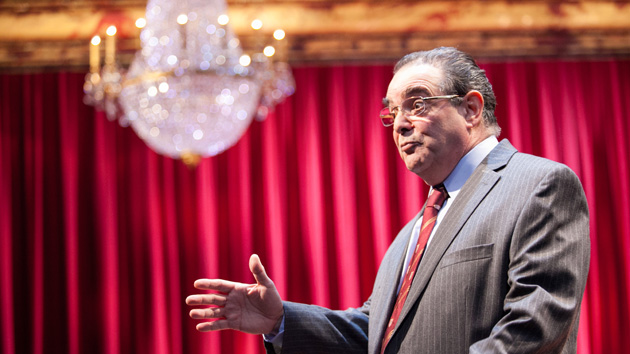 Edward Gero is sitting across the table from me in “the study,” a room in Washington, DC’s Arena Stage theater where floor-to-ceiling glass windows bathe the space in afternoon light. Gero is both broad—in his frame, his smile, and his expressive eyebrows—and sleek, in his signature black T-shirt and blazer. His roles have been as varied as Richard Nixon and Mark Rothko, Salieri and Ebeneezer Scrooge, but offstage he’s just an Italian American actor with a passion for wordplay and theatrics.

Only a few miles from here are the chambers of Supreme Court Justice Antonin Scalia, another histrionic Italian American with a passion for language, and the character Gero has been playing to packed houses for the last month in The Originalist, a new work from the acclaimed playwright John Strand. “How do we manage to respect each other as human beings, even though we may not agree with other’s political positions?” Gero says. “That’s what the play is about.”

To get into character, Gero read Scalia’s biography, listened to his dissents and speeches, and immersed himself in Mozart and Italian opera.

The Originalist explores the intense relationship between the conservative, controversial Scalia—an “originalist” in his strict interpretation of the Constitution—and his fictitious “bleeding liberal” African American law clerk. With just 200 seats wrapping around the stage, the theater gives audiences the intimate experience of sitting in the judge’s chambers as the action unfolds. Portraying Scalia on the justice’s home turf proved intimidating at first, but also thrilling: “He’s vilified by so many, and lionized by others,” Gero told me.

To get inside the judge’s head, Gero read the Federalist Papers and Joan Biskupic’s Scalia biography, American Original. He listened to recordings of Scalia’s dissents and his speeches around the country. And he immersed himself in some of Scalia’s favorite music: Mozart, Italian composers, operas, and jazz. Finally, he got to meet the man himself.

When Gero portrayed Richard Nixon, first in 1999 and again in 2008, observers and playwrights noted his physical resemblance with Scalia, and encouraged him to play the justice. “It’s been in the ether for some time,” Gero says. Ten years ago, Gero met Strand and was “audacious” enough to suggest that he write a play with Gero in mind. The Originalist was the tailor-made result of that suggestion.

The play takes place in 2013. Cat, a young, liberal law clerk and Harvard Law grad played by Kerry Warren, attends one of Scalia’s speeches. She begins to debate him from the audience on gun control and affirmative action. When Scalia chastises her for speaking out, she admits she has applied for his clerkship. Scalia hires her. Their relationship is one of constant, heated debate leading up to the landmark decision in Windsor v. United States—the case that would strike down a key clause in the Defense of Marriage Act, opening the path for LGBT couples to wed. Much to her dismay, Cat is charged with writing the first draft of Scalia’s dissent.

Gero’s biggest surprise upon meeting the 79-year-old Supreme Court justice in the flesh was how open, warm, and funny he was. “You don’t get a sense that there’s anything hidden,” he says. “He’s just who he is, unapologetically.” That realization helped him humanize Scalia for audiences, and make him a more nuanced character than the imposing and rigid judge who, despite his biting wit on the bench, is known for defending torture, trying to block gay marriage, and speaking out against affirmative action.

Scalia’s son “thought it was going to be a hatchet job, so he was really quite surprised when it wasn’t.”

“There’s a physical life that’s very specific to him,” says Gero, who describes Scalia’s tendency to turn his head or close his eyes as “leading with his ear. He’s always listening.” When Scalia is talking, Gero says, he’s “pugnacious,” constantly gesturing with his hands and waving his arms.

For liberal audiences envisioning a Scalia roast, Gero is happy to disappoint. He’s become used to standing ovations, but on what he calls his favorite night the audience refused to stand when he took his bow. For the first time in his career he addressed the audience directly during a curtain call, scolding them in character: “You’re all liberals!” he shouted, drawing everyone to their feet.

Scalia will not be seeing the show, Gero has learned, although his son John attended on opening night and enjoyed himself: “He thought it was going to be a hatchet job, so he was really quite surprised when it wasn’t. He was very gracious and appreciative.”

Beyond the physical resemblance and his talent for playing political characters, Gero had a few more aces in the hole. Like Scalia, he’s an Italian American whose father emigrated to the United States and discovered a degree of success that seemed impossible in Italy at the time. Scalia’s father was a professor of romance languages; Gero’s was a prominent union president.

During our meeting, Gero is wearing a tiny lapel pin with American and Italian flags. The heritage he shares with Scalia, he tells me, was a major theme of their conversations. “We didn’t talk about the play or politics,” he says. They even discovered that their grandparents were from the same little province outside Naples: “I got the sense that he’s someone who would easily be part of my extended family.”

“This is not a biography,” Gero says. “It’s about the democratic process; it’s about respecting each other.”

Gero draws a connection between Scalia’s performance on the bench and his student days as the president of Georgetown University’s drama club, the Mask and Bauble. “As if he were a trained actor, he knows to make his points at the end of the phrases, and keep the energy going,” Gero says. “He’s got great skill.”

Gero hopes his audiences will leave with more than just a nuanced portrait of Scalia. “This is not a biography,” he says. “It’s about the democratic process; it’s about respecting each other. It’s saying, ‘Stop the screaming!’ And listen. Be open-minded. I think the play really asks that of the audience.”

While the show has been extended for another month in DC, Gero thinks it’s not just an “inside the Beltway” piece. “It’s such a national question—the idea of raising ones consciousness on how to conduct a civil discourse,” he says. “I never really quite understood the judiciary in that way. It’s like a Socratic classroom. You can finish the argument and go have dinner together, go to the opera together, and leave the work behind— we’ll get to it tomorrow, it’s not personal. And that’s what we’re lacking in the civil discourse, certainly in the political world.”