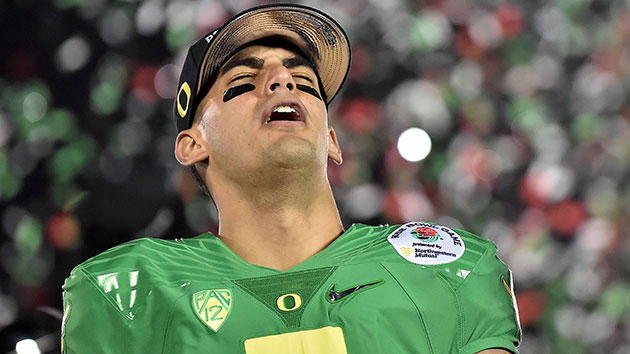 At least you have that Heisman to fall back on, Marcus.Louis Lopez/CSM/AP

The first-ever College Football Playoff, culminating in tonight’s national championship game between Oregon and Ohio State, has been years in the making: Fans, coaches, and players had long complained about the lack of a tournament, à la college basketball’s March Madness, to determine a national champ. The four-team tourney has proved a smashing success: The semifinal games on New Year’s Day each brought ESPN more than 28 million viewers, breaking the cable TV ratings record set in 2011 by the title game between Oregon and Auburn. Thanks to NCAA rules, though, the players will make bupkis. So who is cashing in, then? Here’s a partial breakdown.

ESPN: In 2012, the sports network inked a 12-year, $7.3 billion deal for the rights to air seven postseason college games—the four big bowl games plus two national semifinals and the championship game. That’s a ton of money, even when you consider that media buyers told Advertising Age that 30-second spots during this year’s title game are selling for $1 million a pop. But even if ESPN barely covers its expenses, securing the long-term rights to the playoffs has further cemented its dominance as the go-to channel for sports fans. And that, in the end, should prove immensely profitable.

The NCAA: College sports’ governing body loves to prattle on about amateurism while pulling in nearly $1.4 billion annually in TV royalties for the football playoffs ($608 million) and March Madness ($771 million). Still, Mark Emmert, the NCAA’s embattled president, made $1.7 million in total compensation in 2012, 46 percent more than his predecessor, Myles Brand, earned in his last full year as prez.

Nike: There have been plenty of swooshes on your screen this playoff season: All four playoff semifinalists—Alabama, Florida State, Ohio State, and Oregon—wear Nike gear due to $15 million in contracts for the 2014-15 academic year. (Nike founder Phil Knight is a well-known Oregon alumnus and superbooster.) Related: Have you picked up your special-edition Oregon title game jersey yet? How about your custom CFP Zoom Hypercross TRs?

The Big 5 Conferences: The biggest recipients of the TV largesse will be the so-called Big 5 conferences—the Atlantic Coast, the Big Ten, the Big 12, the Pac-12, and the Southeastern—which will each receive $50 million a year, according to the CFP’s revenue distribution plan. The ACC, Big 10, Pac-12, and SEC also all got a $6 million bonus because their teams made the semifinals, plus millions more for travel expenses. (As you might imagine, these conferences already have hefty TV deals that are distributed among the schools.)

Coaches Mark Helfrich and Urban Meyer: Meyer—who won national titles at Florida in 2006 and 2008 and is earning nearly $4.5 million in base compensation this season at Ohio State—will take home $250,000 just for making it to the championship game. OSU athletic director Gene Smith told USA Today in December that those numbers are right on the mark: “He’s the CEO of a large corporation. We’re fortunate we have him at Ohio State.” Helfrich, the second-year Oregon coach, will pocket $2 million in salary this year (the lowest among semifinalist head coaches), plus $250,000 more should the Ducks win Monday night. (His assistant coaches already have snatched an additional six months’ worth of base salary this postseason, and could earn even more.)

Gene Smith: The Ohio State athletic director came under fire last year when it was reported that he earned a bonus of more than $18,000 after a wrestler won an individual national title in March. He’s on track to make another two weeks’ worth of base pay, roughly $36,000, if the Buckeyes bring home the trophy Monday night.

On Tuesday, the CFP announced that the NCAA would let it help cover the expenses of parents who wanted to come watch their kids play in the title game, allotting up to $1,250 per parent/guardian (maximum: two) for travel, meals, and accommodations. So that’s nice. But what of the kids whose hard work makes this all possible? Don’t they deserve something?

As it turns out, the NCAA allows players up to $550 each in goods from gift suites set up by individual bowl games. According to SportsBusiness Daily, the Rose Bowl (the Florida State-Oregon semifinal) handed out Fossil watches, Oakley Works backpacks, and New Era 59Fifty caps, while the Sugar Bowl (the Alabama-Ohio State semifinal) also gave away Fossil watches and New Era hats. It’s not the custom-made Fathead wall decals handed out by the Quick Lane Bowl, but hey, these kids are amateurs.