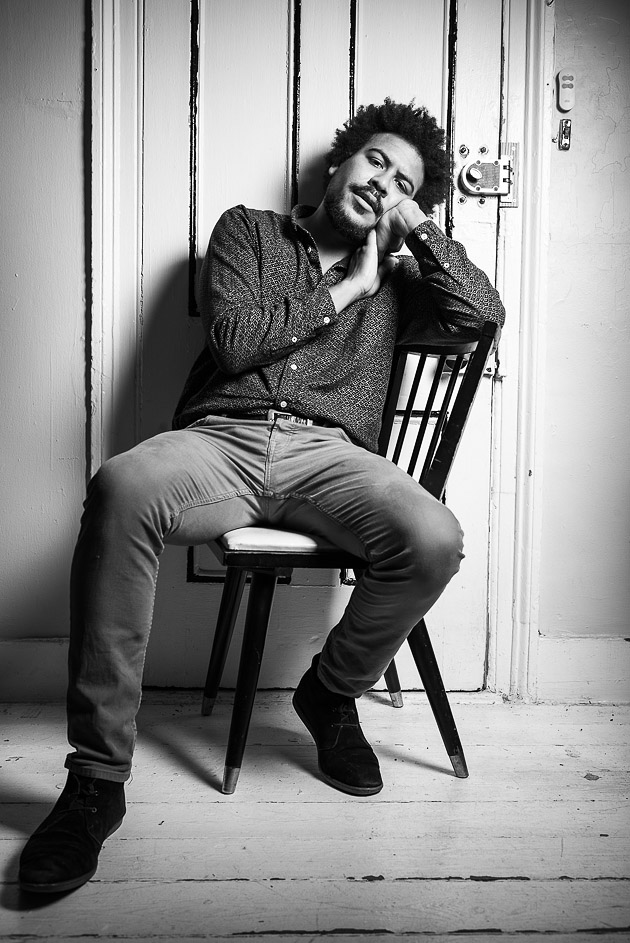 Depending where you start counting, Liam Bailey‘s debut full-length album, Definitely Now, has been at least five years in the making. In 2011, the Nottingham-raised Brit was set to release a full-length on Polydor, produced by Salaam Remi (Nas, Amy Winehouse, Nelly Furtado). But his dissatisfaction with being molded into a pop product precipitated the album’s cancelation and a release from his contract. Bailey had previously put out two EPs on Amy Winehouse’s Lioness Records and a single on the Brooklyn label Truth & Soul, in addition to performing with folk-rock project The Accidental and the electronic music duo Chase & Status.

Definitely Now was finally released last week on Remi’s Sony imprint, Flying Buddha. Reviewed here by Mother Jones‘ Jon Young, it brings new energy to Bailey’s sound, adding crunchy rock-and-roll to his soul, folk, and reggae influences. I met with Liam at his current home, an apartment in Williamsburg, Brooklyn, to talk about the evolution of his music. The following is in his words.

When you’re playing around and you don’t know anything, you’re fearless because you don’t know the rules that are there to be broken. It’s frustrating when I learn—the joy goes out of it. Once I’ve learned it, I get a bit scared about bending the rules, whereas when I didn’t know a thing, I’d go, “Fucking hell, I did that? It sounded really good!”

“I was proven right: I DO sound good on rock and roll.”

When I came to London, I knew how to play guitar, but I’d never played it live or anything like that. I’d been playing acoustic stuff and making it up as I went along. And because of that, things were very soulful and reggae-ish. When I started making records—I’d always been told in Nottingham: “You sound better over softer music, soul music”—I thought, maybe I’m just getting it wrong.

This time, I’ve been very focused. When you’ve been released from a contract that you’ve worked since 16 to get, there’s three things you can do: Shit it, and go on back to Nottingham. Crack on and get on with it. Or just become a drug addict or an alcoholic. So I cracked on, albeit with a heavy lifestyle.

Once I went into recording, Salaam was like, “I like this heavy vibe, I like this; you’re angry aren’t you?” But even then, no one seemed to complain when I put the electric down and picked the acoustic back up to play the earlier styles of music.

“To get on the radio in the UK, you have to follow a formula. It’s not rocket science.”

To get on the radio in the UK, you have to follow a formula. It’s not rocket science: Make sure the chorus is in by the 50th second. You bring in your G, your A, then bring in a minor chord for the emotive feeling. You’ve got your bridge coming in by 55th second; going around the cycle. Preferably be in your middle eight bars by 1:50. Don’t worry if the melody isn’t as strong as the lyric and vice-versa; actually don’t worry if the song’s not too strong, we can just chuck strings on it and do the dynamic Teen Spirit thing. And bang! Radio One will like it, you’re on the radio. And try to have a gimmick if you’ve got one. It’s that easy.

I was glad I got a pack full of lionesses at Turn First Management. We just walked into Polydor and said, “What are you doing?” And they decided I was better relieved of the contract. I only saw it as a blessing over this last year. I was like, “Fuck, I’ve had five years of doing what I love, getting myself into trouble, getting out of trouble, having laughs, and now I’ve got a record I truly am proud of. That was such a brilliant feeling.

Before, I couldn’t look some of my mates in the eye and play them some of the music. There were about four good songs on the canceled record. My mom liked a couple of them. I couldn’t have turned to her and said, “Mom, I’ve walked into Polydor and I’ve quit.” Because where we come from, you don’t do that. You just don’t do it.

“There was one point where I could’ve gone on a warpath and really severed ties in the business in blind rage.”

There was always something, just in the knick of time, to kind of bring me back in to my music. Because there was one point where I could’ve gone on a warpath and really severed ties in the business in blind rage. And if I’d have done that, it’s very, very likely you wouldn’t be talking to me now.

I can be the very emotive, emotional town crier. I remember as soon as it was kosher to do so, ringing people and telling them exactly what I thought of them and not giving a fuck. Some people respected that about me, some people were offended, because they take what they do very seriously. I was always dogged by this thought of “poor me, I’ve had to make a compromise on the song. Poor me, I better ring my dad and tell him how down or upset I am because I’m struggling to to get a song out. I’ll just ring him up during his 14-hour shift on a Saturday night.” Come on, it’s music! Somebody said to me, “If your life’s in danger, it’s not worth it.”

Throughout the disappointment, I remember being kept busy with touring with Chase & Status, I remember good friends, writing with them, writing on my own as well—and I’d just do some of that really shamanic stuff late at night with my guitar. And you wake up in the morning and just cross your fingers for dear life it sounds good. I remember times it was particularly upsetting for me and the people around me, but it was all part of the process of exorcizing demons. My dad has always said that I learn the hard way. And I do tend to learn the hard way.

If I ever get to the point I where I’m locked off creatively like I was before, I’ll fuck it off and get a job. I don’t want one, but it’s fine. I’d rather do that then go through what I put myself through unnecessarily.

Certain times I was thinking, you know, this could be my only shot, my last shot. In a positive way, mind. I might not get another album. I’ve got to smash it. I can’t be going, “Oh, I wish I’d done that. I wanted to do that.” I wanted to get the acoustic in, the folksier side of what I love, and I wanted to get in fucking rock and roll!