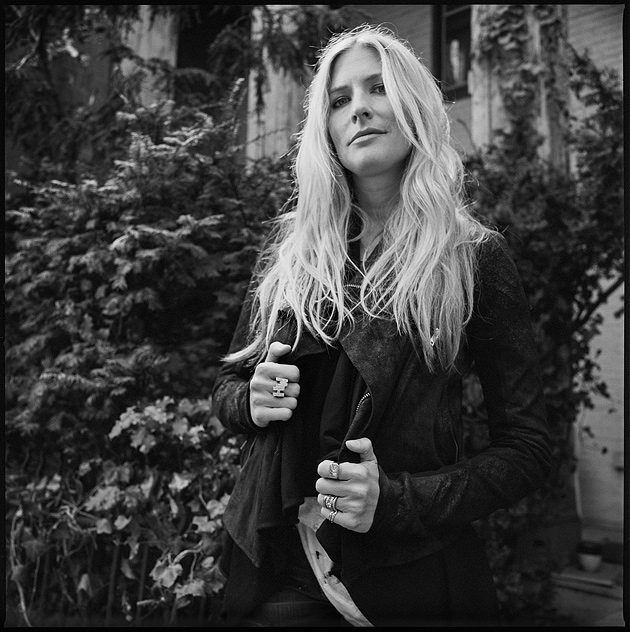 The diamond-studded “HW” ring on her right hand is the only outward indication of country-royalty glitz. She grew up mostly outside of the music business, picking up the guitar in her late teens with a little help from her step-father, Johnny Christopher, a busy Nashville session guitarist and songwriter who co-wrote the modern classic “Always On My Mind.“

Last year, Williams released her third album, The Highway, produced by Charlie Peacock and featuring guest appearances by Jackson Browne, Jakob Dylan, and Gwyneth Paltrow. She’s touring behind the album through August, here and in the United Kingdom. Jacob Blickenstaff photographed Holly in Brooklyn and spoke with her by phone from the road. The following is in her words:

Now it’s all that “bro-country,” with Daisy Dukes, beer, tailgating, and fireworks.

It’s not that I see myself operating outside of country music in that I don’t like it, or I don’t want to be there. I’d like to think that my music would be played on country radio if it were the ’90s, when they had a lot more singer-songwriters on there, like Lyle Lovett and Mary Chapin Carpenter. Now it’s all that “bro-country,” with Daisy Dukes, beer, tailgating, and fireworks. So everybody calls me an Americana artist or singer-songwriter, along with those people who are not mainstream enough for country radio today.  I think “The Highway” is a country song, but radio doesn’t hear it that way, so I’m just living on the outskirts.

I opened my first store a year and a half after the car wreck with my sister. I couldn’t play for about eight months, and I didn’t know how long it would be. My sister was terribly broken. She had 28 surgeries and was in bed for two years. I didn’t want to leave my family and go back on the road. The recession hit and I had split with my first label. I had to take off big chunks of time from music. Music is my first love and always will be, but retail is just in me. Hank Williams and his wife Audrey owned one of Nashville’s first retail stores on Broadway—Hank and Audrey’s Corral—and my grandfather on my mom’s side owned a mercantile, and that’s what my new store is named, White’s Mercantile.

It’s really nice for me to escape and have a couple of hours a day to work on the stores. When you’re a solo artist, you really just think about yourself all day: Here is my interview, here are my songs. I just love getting out of my own head. Even at home vacuuming, just staring at a machine sucking up dirt and it’s very mindless—these domestic things somehow bring the creativity and ideas.

“I was completely kept away from the music business. It was always, ‘I’m not Bocephus, I’m Daddy.'”

I didn’t have a big struggle finding my own identity. I consider what my dad went through to be much harder, considering he was the son of Hank Williams. His mom had him on tour at eight years-old; he dealt with an unbelievable amount of pressure. He would sing his own songs and the audience would boo and leave. But he proved he could do his own music and sell 50 million records. I come from a line of very independent people.

In the beginning, people would come to the shows after drinking all day, thinking it was going to be rowdy because I’m Bocephus’ daughter. And here I am at the piano singing Tom Waits songs. I could probably be a lot wealthier if I had signed with a major label and did straight-up country songs. I wanted to be able to find it on my own. It’s the longer road, but the more fulfilling one.

I was completely kept away from the music business. It was always, “I’m not Bocephus, I’m Daddy.” All we knew was fishing on the farm and hunting and going to Montana and playing with the cows. Dad was on tour all the time, we saw him every two to three months. We lived a very normal life in Nashville. My dad didn’t even listen to the radio. It is the complete opposite of what people think.

The funny thing is, I didn’t pick up a guitar until I was 17, and it was through my stepfather. It was his guitar in the house. My dad never once mentioned, “y’all want to learn an instrument?”

I was writing lyrics at a really young age, like seven or eight. I loved to write stories. Throughout my teenage years I actually wanted to write poetry. When I picked up a guitar and learned three or four chords, that first day I ran downstairs and said, “Mom, I wrote a song!” it seemed like it came out of nowhere. It was very natural.

“Usually they come out of nowhere. ‘Waiting on June’ came when I was washing dishes.”

Whenever I’ve tried to sit down and write a song it never happens. Usually they come out of nowhere. “Waiting on June” came when I was washing dishes. A lot of songs get started that way, at a still moment. I just started singing it like that. I wanted to follow the story as starting from my Papaw’s standpoint; he was always waiting for her, from when they met to when they went to heaven.

The saying is true: “You don’t know what you have until it’s gone.” My grandparents died and suddenly we can’t go to their house for Christmas anymore; the family July 4 is over. There’s so much tradition that ends when a couple who had been together for 60 years are gone. We try to do it the same, but it will never be the same. Part of what I write is about getting older and reminiscing and wanting things to be back how they were, like picking pecans and hanging with the cows on Papaw’s farm.

The cemetery that the song “Gone Away From Me” was written about, Oak Ridge Cemetery, is about two miles from my grandparent’s house. It’s where they are buried and my great-great-aunt Stella who died in infancy is buried, as well as relatives that go back five generations. The song is from my mom’s viewpoint, and also the generation before her—they had a lot of tragedy. Every year, the whole White family would go down to the cemetery around July 4 and visit in the afternoon and be there for each other. Now my grandparents are buried there with just a quiet little oak tree, it’s a sacred place for me.

And what I’d give to go there again
Kiss my daddy’s face, hold my mama’s hand
Little did I know soon they would be
Lying right beside her, gone away from me
Gone away from me.