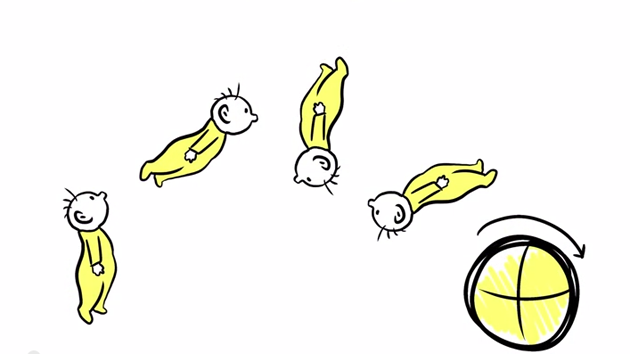 There’s nothing quite as satisfying as a really good joke. Someone has made a clever new connection between two mundane things that we’ve all encountered—and suddenly we have a lovely “aha” moment. We find it funny.

That sense of revelation accompanying a good joke or comic is very similar to what many scientists experience when they finally figure out a great explanation for some kind of previously unknown phenomenon. But don’t take it from us. Take it from the scientifically-trained author and illustrator Zach Weinersmith (née Weiner), creator of the popular web comic Saturday Morning Breakfast Cereal (SMBC), known for its science-themed humor.

“I suspect what’s actually going on with people who are thought of as very creative is they’re good at two skills, one of which is generating connections rapidly, and two, editing out the garbage quickly,” explains Weinersmith on this week’s episode of the Inquiring Minds podcast. 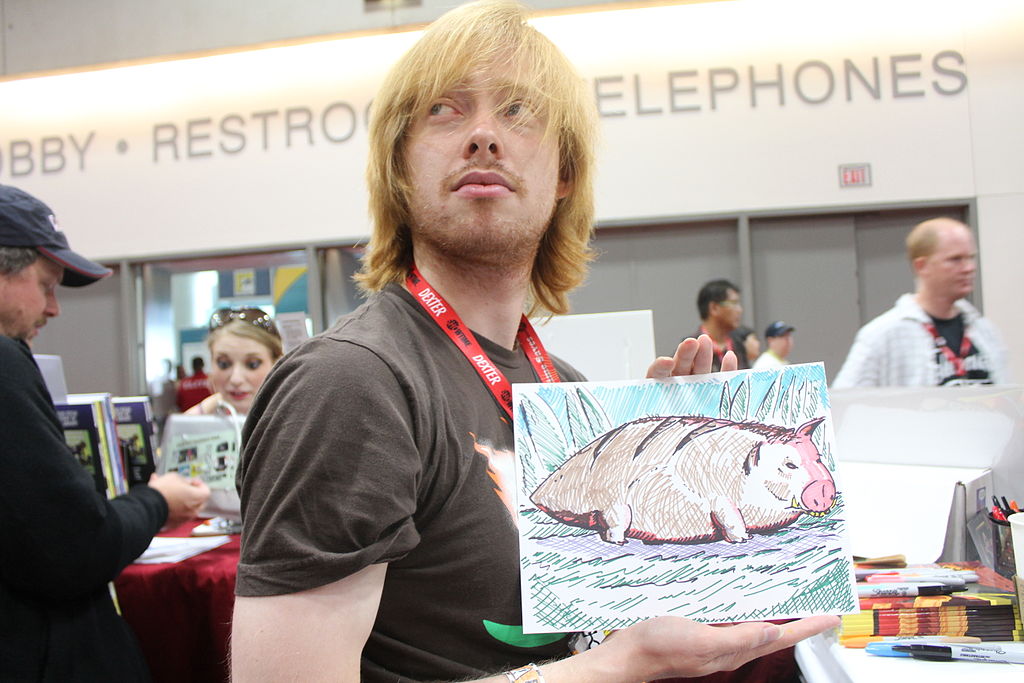 In Weinersmith’s case, some of funniest jokes are actually about just plain bad scientific thinking—and they teach a lesson about what science is, and what it isn’t. The comic artist is now one of the main forces behind an event series, entitled the “Festival of Bad Ad Hoc Hypotheses,” that specializes in “celebrations of well-argued and thoroughly-researched but completely incorrect evolutionary theory.” The winner takes home a sculpture of Charles Darwin, “shrugging skeptically.” The first festival took place at MIT in late 2013.

The idea for the festival originated in a popular cartoon that Weinersmith drew, depicting a scientist presenting the argument that babies are shaped like footballs so that they can be punted over mountains and thereby share hereditary material with more genetically-distinct populations living in nearby villages. (see below; click to enlarge/go to original). On a whim, he polled his Facebook fans to see if anyone might be interested in attending an event in which he turned this comic into a pseudo-serious academic talk.

“To my amazement, a thousand people came to this really dorky show,” says Weinersmith.

The cartoon that started it all. Zach Weinersmith/Saturday Morning Breakfast Cereal

And so BAHFest was born; the first winner gave a talk attempting to explain baby crying (“infant distress vocalization”) as advantageous because it gave supremely frustrated adults a “natural adrenaline boost” that, in turn, made them more effective in battle with rival tribes. Especially when they brought the infants into battle with them. (You might be noticing a theme here.)

Why did Weinersmith and the other organizers choose to highlight fake science talks about topics related to adaptation and human evolution in particular? “Biology is something everybody gets on some level,” says Weinersmith, who confesses he has a much harder time imagining a fake chemistry talk that would actually be funny. But he stresses that he is not “actively trying to make fun of” evolutionary psychology, or the idea that we can explain how humans behave and think today based on the evolutionary quandaries and stresses present during the species’ development. It’s just that the just-so stories characteristic of this field are quite seductive when couched in evolutionary terms.

As for Weinersmith’s own wacko-funny idea that babies are meant to be aerodynamic: He notes, babies are “largely hairless,” an attribute that would reduce friction, or drag, when flying through the air. Plus, when you blow air on babies’ faces, meanwhile, he notes they close their mouths, preventing air from entering their bodies and creating an eddy current. (Weinersmith’s science background is in physics.) “It doesn’t make sense that the baby should have this reflex unless it is designed to fly through the air, via a catapult,” says Weinersmith. 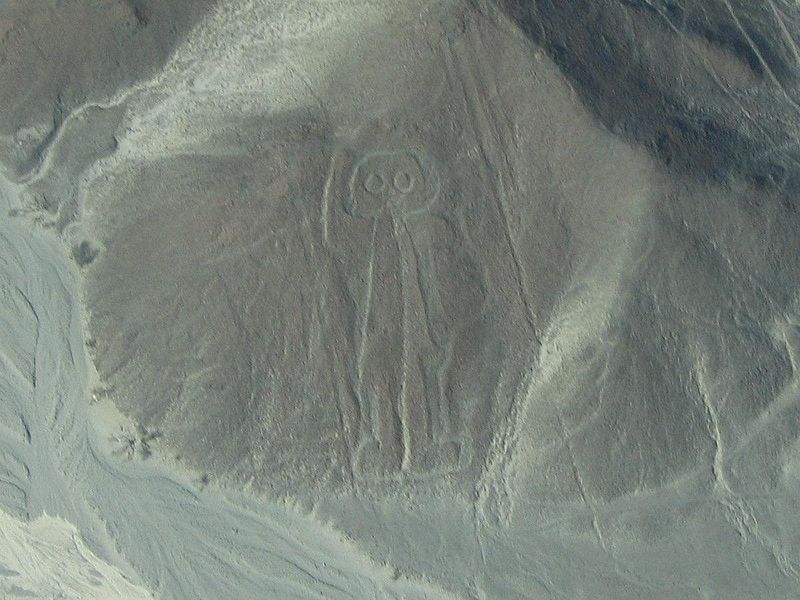 Furthermore, babies enjoy being lifted and spun in the air. And there’s even some historical evidence, Weinersmith says:

If you consider the Nazca lines, these are enormous macrostructures of these simplistic iconic drawings. So why would you ever make a drawing that people on the ground can’t even see, which is also at the same time iconic and cute-looking. There’s only one reasonable explanation which is that it’s designed for a baby to be flying over it and remain calm in flight.

Below is the full video of Weinersmith giving his “Infantapulting Hypothesis” talk at the first BAHFest. You’ll notice one slight alteration in the “theory” from cartoon to lecture: The babies are not being punted any more, but rather, catapulted. “In the original version, the baby was being drop kicked,” says Weinersmith. “And I thought for an audience of semi-normal people, that might be a little upsetting. Or at least, it would be hard to make slides.”

“I think the public often get misled by the idea that getting science is kind of like digging up gold nuggets or something.”

So how do we distinguish fact from fiction when it comes to science? When Weinersmith asked one of the previous BAHFest participants about a certain graph, one that showed a direct correlation between obesity and the length of a country’s roads, he got the following answer: “Nothing that I left in is not true.” And herein lies a major pitfall in science: cherry picking or data mining. Because we humans are highly susceptible to the confirmation bias—that is, we tend to look for evidence that supports what we already think is going on, rather than data that might call our own hypotheses into question—we need to be very careful not to focus on only a small subset of information available to us.

Otherwise, what we think is a good idea might actually be, well, just a joke.

Another serious lesson from the supremely unserious BAHFest is that there is a huge amount of interpretation of data involved in science. “I feel like there’s this unfortunate notion among most people that what a scientist does is get data, and then the data tells them what the conclusion is and that’s how science gets done,” says Weinersmith. “And of course the actual process is quite a bit messier, which probably makes it more fun. But I think the public often get misled by the idea that getting science is kind of like digging up gold nuggets or something.”

When Weinersmith isn’t creating comics and curating events to roast bad science, he’s tending to his 3-month old baby girl. Infantpulting is out, of course, but he says he was thinking about a safe way that he could, er, involve his daughter in a real wind tunnel demonstration to elaborate on the theory.

“I suppose I could 3D print a model of exactly my kid for the experiment,” he says.

To listen to the full Inquiring Minds interview with Zach Weinersmith, you can stream below:

This episode of Inquiring Minds, a podcast hosted by neuroscientist and musician Indre Viskontas and best-selling author Chris Mooney, also features a short discussion with Cynthia Graber, author of the new PBS/NOVANext article “The Next Green Revolution May Rely on Microbes,” and a discussion of the science of why human biting is so dangerous, and of how our hormones influence political choices.

To catch future shows right when they are released, subscribe to Inquiring Minds viaiTunes or RSS. We are also available on Stitcher and on Swell. You can follow the show on Twitter at @inquiringshow and like us on Facebook. Inquiring Minds was also recently singled out as one of the “Best of 2013” on iTunes—you can learn more here.