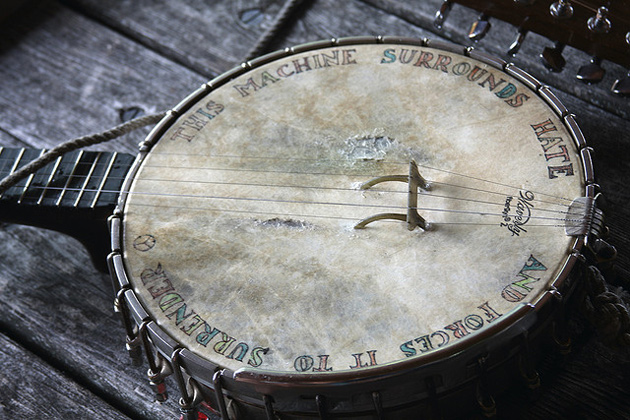 I was waiting for Pete Seeger along Route 9 in Wappingers Falls, an hour north of New York City, when he pulled up in the strip mall parking lot in his Toyota Highlander. It was 2008, and I was there ostensibly to write for the New York Times about Seeger’s weekly Saturday protests against the Iraq War, which he’d been attending for four years. But the secret reason I went was because I’d recently entered local politics, and had found change difficult to accomplish, and progress sluggish. I wanted to know how a man who’d been castigated, blacklisted, and even stoned (literally, by a mob in Peekskill, New York, in 1949) over five decades of political activism had kept the faith.

“This is my religion now,” Seeger said, stuffing the trash into his pockets. “You do a little bit wherever you are.”

From his car trunk, Seeger pulled out his banjo and a few signs, including one on which he had spray-painted “Peace” in orange. As he walked to meet about a dozen other protesters, he bent like the handle of an old water pump to pick up a discarded Burger King coffee cup and a damp brown napkin.

“This is my religion now,” he said, stuffing the trash into his pockets. “You do a little bit wherever you are.”

After Seeger found his way to the other war protesters, they started chatting about the “Patriotism is Patriotic” placard displayed at a pro-war demonstration across the road. “I went over once,” Seeger told his fellows. He’d walked right across the road, where he’d told a man, “‘I’m glad we live in a country where we can disagree with each other without trying to shoot each other.’

“He had to shake my hand,” Seeger concluded. “He didn’t know what to say. I even picked up a little litter over there.”

The singer also told us about a teenager who sometimes attended the anti-war protest, and who was less diplomatic toward the opposition. “If somebody gives us the finger, he shouts, ‘Fuck you,'” Seeger said. “I try to persuade him: ‘You should say, “God bless you. That would confuse them. Blow them a kiss.”” Seeger’s own resistance didn’t wear a scowl, it wore a smile.

As Seeger stood there with his peace sign, I asked him how he overcame the molasses pace of change activists face, not to mention the inevitable setbacks. He responded by tilting his head back and breaking into one of his songs, “Take It From Dr. King,” written after the September 11 attacks.

“Don’t say it can’t be done,” Seeger sang, his Adam’s apple bouncing, hands slapping out the rhythm on his knees. “The battle’s just begun/Take it from Dr. King/You too can learn to sing/So drop the gun.” Then he told me that justice had gained ground during his lifetime, and that change often seemed impossible until it happened: Think about civil rights in this country, he said, or the collapse of communism in the Soviet Union without a fight.

Still, I asked him: “Do you think a dozen people protesting here really makes any difference?”

“The last time there was an anti-war demonstration in New York City, I said, ‘Why not have a hundred little ones?'”

“I don’t think that big things are as effective as people think they are,” he said. “The last time there was an anti-war demonstration in New York City, I said, ‘Why not have a hundred little ones?'”

As part of the day’s protest, Seeger joined other musician-activists without his name recognition singing tunes such as “Follow the Drinking Gourd,” the spiritual used to give guidance to escaped slaves on the Underground Railroad, and “This Land is Your Land,” written by Seeger’s late friend, Woody Guthrie. At one point he stopped singing and crowed over the noise: “This song was never sold in stores. It’s one more example of a small thing that’s spread.”

He played these songs on the very same banjo he’d used to protest the Vietnam War. Around the instrument’s rim, in a rainbow of Magic Marker colors, he’d written: “This machine surrounds hate and forces it to surrender.”

A few hours later, he carried the banjo, like an old musket, back to his car. There, I asked him the most important question I’d brought along with me that day: Given the odds, the political landscape in America—an unnecessary war, growing inequality, a dysfunctional government—how did he manage to stave off bitterness?

“You have to keep your sense of humor,” he replied. “And you have to keep in mind the little victories. And you have to keep articles and share them.” Earlier in the day, he’d been handing out copies of a Philadelphia speech on race recently given by then-presidential candidate Barack Obama. “If you write a good article, I’ll copy it,” he told me. “I’ll share it around.”

That made me laugh.

I returned home with a broader perspective, and I’ve tried to hold on to what I learned about activism that day: Be friendly to the opposition, engage locally, laugh, take inspiration from history, stay optimistic, stand with others, share good news, and be grateful for the little victories. It’s more than a prescription for survival while fighting for social change. It’s a prescription for happiness, even in hard times.